Dan Snyder may be selling the Washington Commanders. Will it affect his giving?

Unlike some other NFL team owners, Snyder isn’t widely known as a philanthropist. 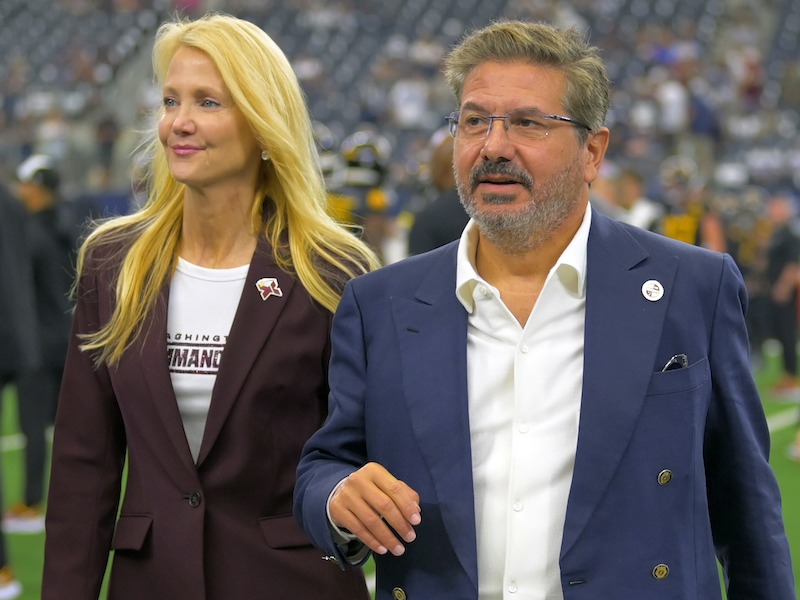 After years of facing controversies — ranging from accusations of workplace harassment to protests that his team’s former name was a racial slur — Dan Snyder may be preparing to sell the Washington Commanders NFL franchise.

Snyder, who is Jewish, announced on Wednesday that he has hired Bank of America to “consider potential transactions” related to the team. According to the sports publication The Athletic, that could mean Snyder, whose family owns 100% of the Commanders, is thinking about selling his controlling share of the team or a minority stake.

In either case, a sale will mark a new chapter for Snyder at a time when he faces a string of investigations conducted by the NFL, Congress and local attorneys general. The congressional investigation centers on allegations of sexual harrassment and a toxic work environment at the franchise. The attorneys general of Virginia and Washington, D.C., are investigating alleged financial improprieties. The NFL is investigating both the accusations of financial wrongdoing and the workplace allegations.

The investigations are occurring after Snyder changed the name of the team in 2020, following years of resisting calls to abandon the former name, the Redskins. He has owned the team since 1999.

Along with the team’s future, what remains unclear is how a proposed sale will affect Snyder’s philanthropic activity, which is centered on community philanthropy and children’s well-being and includes some Jewish giving. Snyder, 57, has a net worth of $4.9 billion, according to Forbes. The team is currently valued at $5.6 billion and could sell for more.

Unlike other Jewish (and non-Jewish) NFL team owners, Snyder isn’t widely known as a philanthropist. Forbes gave him a “philanthropy score” of one out of five, the lowest possible, indicating that he’s given away less than 1% of his wealth. He has an inactive family foundation.

Snyder has been charitable via his team. The Washington Commanders Charitable Foundation donated $2 million to community organizations in 2021, according to its annual report, and has given a total of $31 million since it was founded in 2000. The foundation focuses on health, including breast cancer awareness, as well as supporting veterans and community aid. It has a “Coach of the Week” program that grants $1,000 every week to a high school football program during the football season. A spokesperson for the Commanders did not respond to a request for comment.

A local Jewish community leader in Washington told eJewishPhilanthropy that they have no recollection of Snyder donating to mainstream Jewish organizations in the area. But he, or his family, have given to two area synagogues.

Snyder asked to postpone a deposition before the House of Representatives this year in order to commemorate the anniversary of his mother’s death in Israel.

Rabbi Sholom Raichik, of the Chabad of Upper Montgomery County, in Gaithersburg, Md., who accompanied Snyder on the trip, wrote in a letter to the House Committee on Oversight and Reform that the Snyder family would miss the deposition date because they would be in Israel dedicating a Torah scroll in Snyder’s mother’s memory. “For many years, the entire Snyder family have been generous supporters of Jewish charitable causes in Israel, New York, and in the greater Washington area,” Raichik wrote.

The Snyder family has also donated to B’nai Israel Congregation, a Conservative synagogue in Rockville, Md. According to a B’nai Israel synagogue bulletin from September, Snyder’s mother, Arlette, who died last year, left a bequest to the synagogue that went to an endowment she had previously created to maintain the synagogue building, which is named for Snyder’s father, Gerald. An employee of B’nai Israel told eJP that she was not authorized to give more information about the Snyders’ giving, and did not respond to follow-up questions.

“B’nai Israel Congregation holds so many memories for our family,” Snyder was quoted as saying in the synagogue announcement. “My mother and father were deeply committed to the Jewish community, and our entire family is so proud that they decided to continue that commitment as a part of their enduring legacy.”

By contrast, New England Patriots owner Robert Kraft (net worth $10.6 billion) has given away a total of more than $400 million, won the Genesis Prize in 2019, and is known as a funder of Jewish campus life and initiatives to combat antisemitism, as well as efforts to expand healthcare access. Last month, he gave $50 million to Massachusetts General Hospital, targeted toward narrowing health disparities.

Minnesota Vikings co-owner and President Mark Wilf has also been a leading supporter of Jewish causes. He’s currently the board chair of the Jewish Agency for Israel, after having served in the same role for the Jewish Federations of North America. He spoke at JFNA’s General Assembly this week.

The bulk of Snyder’s personal giving appears to have been to organizations helping children: the Children’s National Hospital, Youth for Tomorrow and the National Center for Missing and Exploited Children. The latter organization honored Snyder and his wife, Tanya, at a dinner in 2014 in recognition of their giving. And in 2001, Snyder gave $3 million (equivalent to $5 million today) to Children’s National Hospital.

Snyder has also given hundreds of thousands of dollars to Youth for Tomorrow, a Virginia-based organization that helps youth and families in crisis. Its vice president for development and public relations, Love Jones, praised Snyder for his giving, and cast doubt on the myriad controversies that have dogged him.

“Dan and Tanya are longtime supporters of Youth for Tomorrow,” Jones told eJP. Regarding the investigations, she added, “It’s unfortunate. Sometimes it can be, I don’t want to say a witch hunt… Is it all factual or is it just hearsay? I really don’t know.”