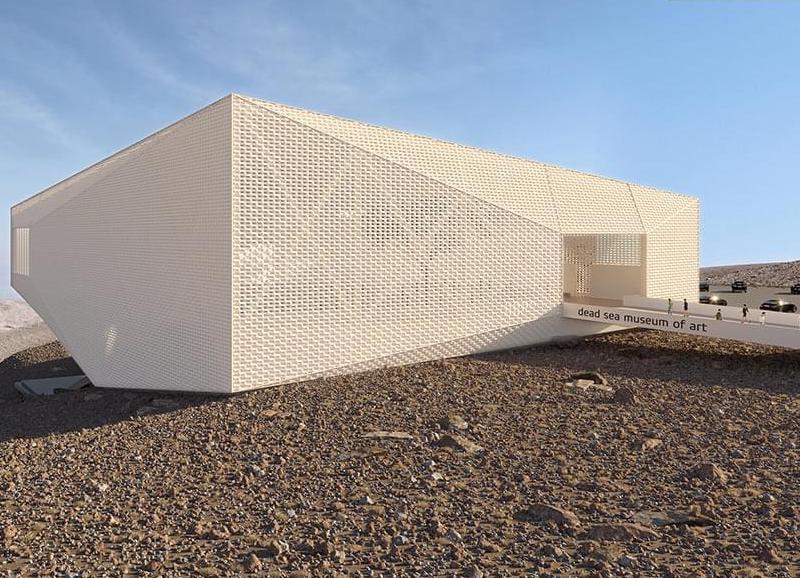 A rendering of Fruchter's proposed museum in the desert.

Ari Fruchter, an Israeli-American former tech executive and art aficionado, wants to prove he’s worth his salt – by working to halt the dramatic shrinkage of the Dead Sea.

Fruchter has spearheaded many projects to save the saltiest sea in the world, situated 1,400 feet below sea level. His efforts have ranged from the traditional — co-founding an educational nonprofit called the Dead Sea Revival Project — to the outlandish — hiring a photographer to do a 300-person nude photo shoot on the sea’s beaches. He also sold salt from the Dead Sea as a line of gourmet cooking salts under the brand Naked Sea Salt, with 3% of the profits going to the Israeli Arava Institute for Environmental Studies.

“That experience was my way of thinking, ‘How do I continuously keep people connected to the Dead Sea?’” Fruchter told eJewishPhilanthropy. But none of it has worked. Since the middle of the last century, according to a recent Israeli government report, the sea has lost 40% of its volume and is receding more than three feet per year.

So in 2019, Fruchter had a new, and grim, idea: build an art museum both to inform the public about the environmental issues affecting the sea – and to serve as a permanent monument to a landmark that may soon be no more than a puddle.

“We happen to be caretakers of it, living in this part of the world, but we don’t own the Dead Sea,” Fruchter said. “I feel Israel should have done a better job taking care of it. And I’m stepping in, where they fell, to go ahead and to invest in it, to make sure that we’re going to be able to appreciate it and learn from it forever.”

Now, after quitting a tech career that included stints at SanDisk and Microsoft, Fruchter, 51, is focusing full-time on raising $30 million for a capital campaign to build the Dead Sea Museum of Art. The museum will be located in Arad, Israel, about 17 miles from the sea, on five and a half acres donated by the city. As a proof of concept, the “museum” already exists online, where it displays virtual exhibitions.

Rather than hosting a traditional permanent exhibition with curators, Fruchter envisions the museum serving as a center for multimedia art projects in the vein of teamLab Planets in Tokyo, where room-sized projections immerse visitors in visual art created by a team of engineers, animators, artists and architects. Fruchter said he is already working with Refik Anadol, an artist who uses machine learning and artificial intelligence to turn data into virtual installations.

“If there’s someone that you love who, God forbid, is dying… you don’t run away from that person,” Fruchter said. “You want to figure out how to prolong their life, and in the unfortunate event that they will pass away, you then want to preserve their memory.”

He added: “I’m not a doctor. I can’t save the Dead Sea myself. But I could definitely help preserve this memory….[and] establish a physical art museum, something that will give people an experience that they can no longer have today.”

Due to a mix of climate change, Israeli, Syrian and Jordanian water policy, and the mineral extraction industry on its shores draining the water, the Dead Sea is drying up. As the salty waters move inward, the freshwater that supports nature reserves and tourist sites like Ein Gedi is moving with it, dissolving underground salt formations. The destabilized ground then collapses, causing sinkholes that have shut down most Dead Sea beaches and taken chunks out of Israel’s Highway 90, a north-south throughway.

An Israeli government report on efforts to save the sea, released this week, paints a dire picture of what’s to come. The report says that “the current situation and predictions of the future depict the Dead Sea as a disaster-stricken area.” It recommends pumping water into the sea to stabilize its surface level, and to reduce industrial activity in the area, including pumping water from the sea.

“The desire… to restore the surface level and shoreline of the Dead Sea to the days of the middle of the last century is shared by many in Israel and the world,” says the report, which was published by the Israeli Environmental Protection Ministry and other associated groups. “But we must recognize that, given the regional water crisis, there is no way to turn back the clock. Every attempt to compensate for the great water deficit via the inflow of water… comes with inconceivable environmental and economic costs.”

But Fruchter isn’t giving up. A former board member of the Tel Aviv Museum of Art, he’s betting on the Bilbao effect to make the Dead Sea Museum a success and inspire action to save the sea. Bilbao is the Basque city in northern Spain where Frank Gehry, the renowned architect known for his wavy buildings, designed the Guggenheim Bilbao, a world-class museum of modern art. In its first three years, the Guggenheim generated roughly $500 million in economic activity and international attention.

“The building was so architecturally significant that people around the world paid attention,” Fruchter said. “The whole city exploded [economically] as a result. There was a whole ecosystem built around it. And I figured, now I want to do something equivalent to the Dead Sea.”

For the Dead Sea Museum, Fruchter is going with an architectural design inspired by a salt crystal. In renderings, the building is angular, and part of it rises to cast shade over a sloping desert hill, where the city of Arad hopes to construct an amphitheater. The museum is also intended to be energy efficient and carbon neutral, with mesh walls that help to dissipate the desert heat.

Does he think the museum’s design will command the same kind of attention that the Guggenheim Bilbao does? “Absolutely yes,” Fruchter said. “The Frank Gehry museum…worked well for Bilbao. This is a desert. It’s a completely different kind of environment.”

Fruchter’s confidence in the museum’s success comes from years as an entrepreneur in Israel’s tech industry, and a deep connection to the art world in Israel. Fruchter’s great-grand-aunt was Charlotte Bergman, an avid art collector and co-founder of the Israel Museum in Jerusalem. Bergman lived on the museum grounds until her death in 2002.

Art was “very important to her, [but] not from a monetary perspective,” Fruchter said. “So I learned a lot from her in terms of loving art, loving Israel and also wanting to contribute back to the country.”

But he readily admits that his knowledge of nonprofit fundraising is minimal. Fruchter only recently started contacting foundations and donors in the American Jewish community to find the money to build the museum.

In the past, Fruchter has crowdfunded his independent efforts to raise awareness of the Dead Sea’s plight. The roughly $50,000 in initial funding for the museum project came from Headstart, an Israeli crowdfunding site. Fruchter also has architectural plans from Neuman Hayner Architects, the land, a business plan and cooperation from Arad.

“In theory, I would have loved to have sat down with Sheldon Adelson and talked about it. I don’t have access to people like that,” Fruchter said, referring to the casino mogul and megadonor to Republican and Jewish causes, who died last year. “I’m just doing it blindly by myself. I don’t have a [fundraising person]. I don’t even know where to find one that’s legitimate, that can actually do something properly. So like everything in life, eventually I figure it out…through hard work and not being shy.”

So why should donors trust him to build the Dead Sea Museum of Art?