The drop in enrollment was lower than camping officials anticipated, but staff shortages remain an issue. 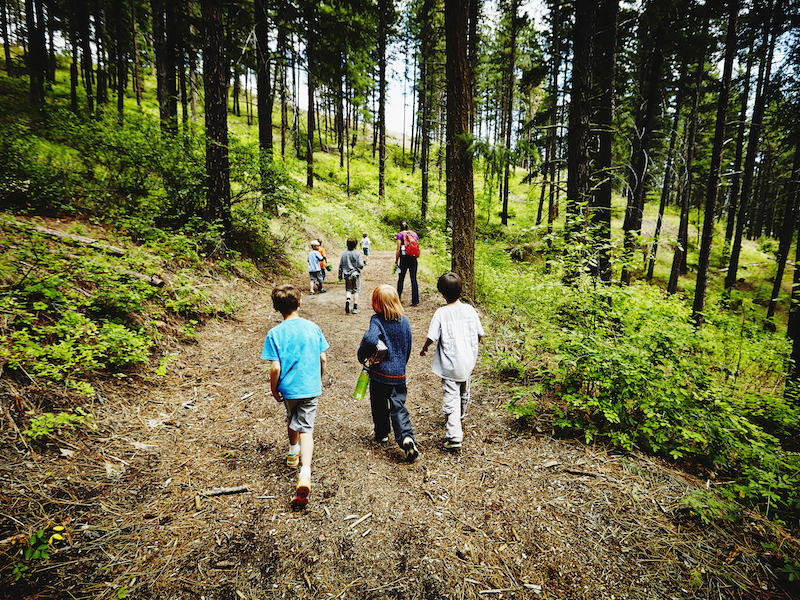 A group of kids walks on a trail at summer camp.

Two years ago, when nearly every Jewish overnight camp in North America announced that it would remain closed for summer 2020, observers could be forgiven for thinking that the pandemic would decimate the Jewish camp network.

Now, a new survey of Jewish camps has quantified the damage, and while it was substantial, it wasn’t as bad as camp professionals feared. According to the survey, a copy of which eJewishPhilanthropy obtained prior to publication, attendance was down 16% and expenses were up 20% in 2021 relative to 2019. Staff recruitment continues to lag, and tuition has risen beyond the (already high) rate of inflation.

But the attendance shortfall was narrower than expected — FJC had predicted a 25% to 30% drop — and was mostly due to pandemic-related capacity restrictions imposed by local government, said Jeremy Fingerman, CEO of the Foundation for Jewish Camp, (FJC) which conducted the study. He has said he expects the number of campers this year to rebound to pre-pandemic levels, and the survey indicates camps are on good footing to recoup the financial hit they took when they closed in 2020. Plus, the incidence of COVID-19 last year at camps was relatively low: the survey found that while most day camps saw cases, four-fifths of overnight camps did not.

“It took incredible effort even to achieve these enrollment numbers,”  Fingerman told eJP regarding 2021. “Last year, it was ‘Can we just get open?’ This year, it’s about making it a fabulous experience for the campers and the staff.”

Before the pandemic, more than 152,000 campers attended some 330 Jewish camps, with the numbers of camps and campers split about evenly between day and overnight camps. In 2021, total attendance at 315 camps was a bit more than 128,000. The share of campers attending Orthodox and Chabad-affiliated overnight camps grew from 2019 to 2021, while the proportion attending JCC camps shrunk.

The financial picture also does not appear dire for camps, though parents are bearing an increased cost. Tuition rose 15% from 2019 to 2021, costing an average of $1,380 per week for overnight camps and $528 per week for day camps last summer.

The additional staff and precautions necessitated by COVID meant that total camp expenses rose from $300 million to $375 million between 2019 and 2021. But the survey found that the camps, overall, made ends meet last summer, bringing in a total of $400 million in revenue, including $18 million in federal pandemic loans. Fingerman said that surplus would help cover a total of $150 million in expenses from the canceled 2020 summer.

“It’s either going back — now, we have got to cover the losses of previous years — or it’s money that’s now going to go back into the facilities or into the scholarship pool for the next year,” Fingerman said.

Making sure there are enough staff for the campers has proven a challenge: numbers are down across the board. The number of year-round staff was 34% lower than in 2019, the number of seasonal employees — the bulk of  summer staff — was down 16%, and counselor-in-training programs have also shrunk.

It’s a problem that predates COVID-19, said Julie Finkelstein, FJC’s senior director of program strategy and innovation, though the pandemic and Great Resignation didn’t help. High school and college students are lured by career-building internships or jobs that don’t require them to be in one often remote location for the whole summer.

Some camps are raising salaries and offering bonuses; in 2021, according to FJC, the average eight-week pay for counselors ranges from a bit more than $1,500 for high school students to about $3,800 for unit heads — plus room and board. Meanwhile, a program through the Jewish Federation of Cleveland is awarding up to $5,500 in college tuition money to overnight camp counselors.

Other camps are improving the staff experience — shortening their hours, having more internal programming for counselors or changing their job titles (to “child care specialist,” for example) to emphasize the skills they’re developing.

“Asking them to commit to spending their summer doing nine weeks of one job often was a challenge,” Finkelstein said. “The problem is not that people don’t want to work at camp — we still have a very good product — people love camp, they want to be at camp. They just have pressure to do other things.”

The FJC report’s cover features campers wearing masks, but one thing that’s almost certain to change is how camps handle COVID. Fingerman said that, two years after the virus shut camps down, it’s now not even one of the system’s top two concerns. “Right now, I think if you asked camp directors they’d say the number one concern is inflation, and supply chain… and then, I’d say, it’s COVID,” he said.

Last summer was all about creating pods of campers, indoor and outdoor masking policies and a strict testing regimen. This year, as every U.S. state has dropped public health restrictions and almost all children can get vaccinated, camp will likely look a lot more like it did three years ago.

“They’re feeling like, if they want to loosen the mitigation strategies, it’s very likely that COVID would present itself,” Fingerman said regarding camp directors. “And they just need to be prepared for that.”