Jewish disability inclusion advocates say that while some parts of Jewish communal life have become more accessible, there's still work to do. 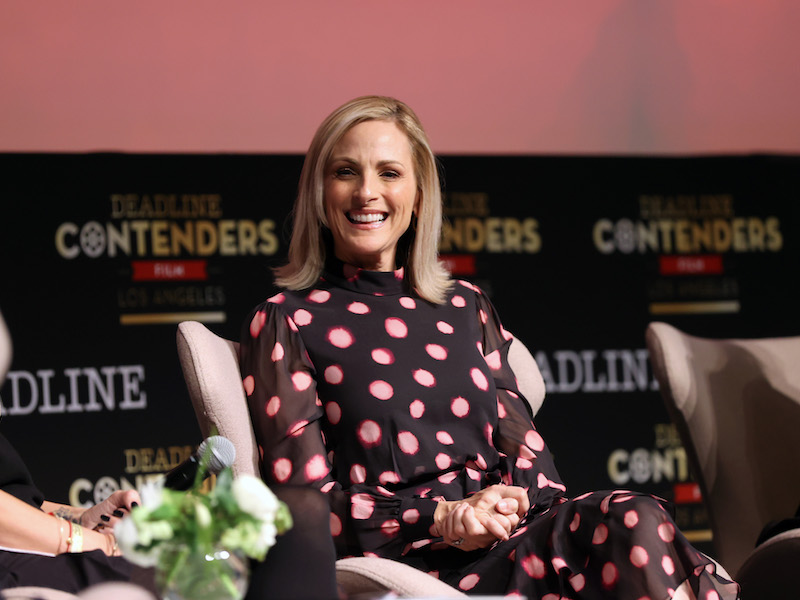 Marlee Matlin speaks at an event in Los Angeles, Calif. in November.

More than three decades after she became the first deaf person to win an Academy Award, actress Marlee Matlin is in the thick of another awards season that, she hopes, will highlight the experiences of people with disabilities.

Last year, Matlin, who is Jewish, co-starred in “CODA,” a dramedy about the only hearing member of a deaf family. The film was nominated for a string of awards, including the Golden Globe for Best Picture – Drama, and Matlin herself is up for Screen Actors Guild and Satellite awards.

The attention has come, she said, two years into a pandemic that has brought both hardships and benefits to people with disabilities.

“Things like Zoom and virtual meetings have provided opportunities for those of us who may not necessarily be able to, because of mobility issues, get out or be able to travel,” she said through an interpreter, explaining that captions have also made online programming accessible. But there are difficulties as well. “It’s hard for me to go to a grocery store and read someone’s lips with a mask on,” she said. “I just ask them to lower it for a second so I know what they’re saying. Other times, some people don’t have patience, but it’s all a process.”

Matlin is hoping to draw greater attention to the experience of disability in the Jewish community on Monday, when she’ll speak at an event hosted by the Jewish National Fund-USA to kick off February, which is Jewish Disabilities Awareness, Acceptance, and Inclusion Month (JDAAIM).

Heading into the month, Jewish inclusion advocates echo Matlin’s experience. The pandemic, they said, has both highlighted ways in which Jewish institutions have become more inclusive, and shone a light on work that still needs to be done.

People with disabilities “have found entryways into [the] Jewish community that they never had and that is a tremendous blessing,” Rabbi Lauren Tuchman, who is blind, told eJewishPhilanthropy. “Virtual programming often means more folks with disabilities are able to participate fully.”

She added, “The urgent work ahead of us is to continue managing this liminal time in which we find ourselves, taking care not only to care for ourselves, but also to have in mind the needs of our community members and congregants with disabilities who often feel unacknowledged and invisible.”

A recent survey on disability in the Jewish community, conducted by RespectAbility, an organization that aims to promote inclusion in the Jewish community and, more broadly, shows pluses and minuses. In a survey of more than 2,300 Jewish respondents (contacted largely through paid email blasts, through which recipients could opt in), just 31% said the Jewish community is doing “extremely well” or “very well” in including people with disabilities. The number was lower among self-identified respondents with disabilities. But the survey also found that majorities of both groups said the community is doing better on the issue than it was five years ago.

“There is now the will — they want to include people with disabilities,” said Jennifer Laszlo Mizrahi, who founded RespectAbility more than eight years ago. “Many synagogues, day schools, JCCs, camps, etc. have a disability inclusion initiative and they have identified an individual or group of individuals who are responsible for moving that forward.”

But Mizrahi also said that many Jewish organizations are not doing simple things to further inclusion. “What is still to me, frankly shocking is that some of the inclusion that’s free and instant to do is still not being done,” she said, including captioning in-person meetings or holding in-person events in spaces that are fully accessible — and not only through “the door by the dumpster.”

There’s also been significant turnover in the Jewish disability advocacy world. Last year, the Ruderman Family Foundation, which devoted $80 million to disability inclusion over 18 years — at times 70% of its annual budget — announced that it was stepping away from funding that work. It’s now more focused on funding mental health programs in Massachusetts, where it’s based.

Mizrahi said that Ruderman’s exit from the field led groups to turn to RespectAbility, as well as Mizrahi’s private philanthropy to disability groups, to fill the gap. But in June, Mizrahi will make a transition of her own: She’ll be leaving RespectAbility after about a decade in the field, and the group will search for a new CEO.

Like Matlin, Mizrahi sees TV and film as a way to change the public’s perception of disability, and recently, RespectAbility has devoted a significant part of its budget, which will be $4 million in 2022, to consulting on shows and movies to help them include characters with disabilities, in addition to helping people with disabilities get jobs in show business. It also does work in public policy, and last year received its largest-ever donation: $1 million from the Hilton Foundation.

But Mizrahi still pays attention to inclusion in the Jewish world, and just released a guide for Jewish institutions to become more inclusive. She hopes that as American Jews emerge from the pandemic, their institutions find ways to include people with disabilities both virtually and in person.

“Particularly for things that are expensive, like putting in an elevator or renovating a building, [virtual programming] can be used as an excuse or an out to say, ‘You can just watch online,’” she said. “I hope people don’t take those approaches.”

One way to avoid that, inclusion advocates say, is to make sure people with disabilities have a role in decision-making. RespectAbility’s survey found that fewer than one-fifth of respondents knew a rabbi or staff member with a disability at their Jewish institutions.

“I want our community members to understand that you need not look at us with pity or with sadness,” Matlin said. “The important thing is to collaborate, to communicate, and to just include us, and we’re the best people to tell you what to do.”