Shoshan hopes to create academic partnerships with universities and import Israeli art to the United States. 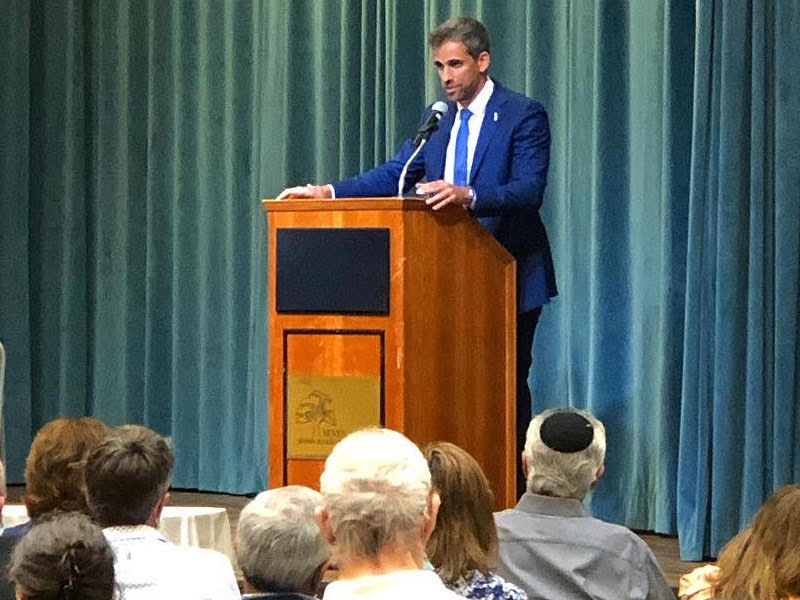 In March 2020, aspiring diplomat Elad Shoshan was laid up at Rabin Medical Center’s HaSharon Hospital in the central Israeli city of Petach Tikvah, where — for 34 days — doctors poked and prodded and shrugged at the ever-changing symptoms of what was then a relatively new condition: COVID-19.

Shoshan, who was Israel’s 190th Covid case, recovered and was released in April 2020, eager to start serving his country abroad. But because doctors wanted to monitor him at regular health check-ins, he had to delay that goal for a year, starting his diplomatic career by working at the Foreign Ministry in Jerusalem. After that, he applied for foreign posts and this past March—two years after his hospitalization—started work as Israel’s consul to the Southwest United States.

Now based in Houston, Shoshan, 36, works to strengthen the relationship between the region — including Texas, Louisiana, Oklahoma, Arkansas and New Mexico—and Israel.  “My desire to serve Israel is immense,” he told eJewishPhilanthropy, adding that he hopes to “show the actual face of Israel, and strengthen and promote Israel to the world.”

The position of consul is not a political or partisan appointment, and does not support or oppose candidates or parties in Israel or the United States. The consul “has no stake in who’s going to be the next leader,” Shoshan said. “We’re working [in a] bipartisan [way] and sitting down with and getting to know everyone [in order to] preserve [U.S.-Israel relations] to the best of our abilities.”

Shoshan is a graduate of the Israel Ministry of Foreign Affairs diplomat’s training course; of 3500 applicants during the year he applied, only 18 were accepted to the course, which included six months of screening, psychological tests, security checks and various interviews, all “to see if you can learn all the tools that are ‘assembling the diplomat’ in the ministry’s eyes,” Shoshan said.

Because the course serves as a gateway to what will hopefully be a long career in diplomacy, he said, there are many skill sets and bases of global knowledge that it aims to develop — from working with local officials in the communities where diplomats serve to sharpening presentation and foreign language skills. Above all, cadets are trained to “portray the messages and goals that the government and the Foreign Ministry want to implement all over the world,” said Shoshan. This includes how to expose locals to Israeli culture, how to elevate cooperation between local and Israeli people and initiatives, “learning about the different challenges Israel is facing, both domestic and foreign, and how to become somebody who can assist Jewish communities around the world,” Shoshan said.

Shoshan brings to the post diverse experiences serving Israel over the decades, from his work as CEO for Momentum, an NGO that helps discharged IDF solders acclimate to civilian life, to Zikaron BaSalon, an organization that arranges small-group meetings with Holocaust survivors. He has also worked in the private, governmental and nonprofit sectors with social and business entrepreneurs, and on causes ranging from urban revitalization efforts to inclusion for people with disabilities.

“It’s important to me to maximize my abilities to support Israel in any way I can,” he said.

When he was assigned to the southwest, Shoshan was thrilled. “My desire was to get to work in North America because that’s one of the main goals, to support and strengthen 75 years of Israel and U.S.-Israel relations, and to use media and public diplomacy to emphasize the strong and valuable connection” between the two countries.

While Shoshan visited the U.S. before this posting, he had never been to any of the states in his region. But the locals have welcomed him, and — despite being 15,000 miles away from where he grew up — he is beginning to feel at home.

The Petach Tikva native traces his diplomatic impulse to a childhood encounter with Houston Jews, who were visiting Israel and held a “Kefiada,” or fun festival, for local children nearby. He was eight years old at the time, he told eJP, and the interactions with these visitors made him realize he wanted to “educate other people about what’s taking place in Israel, the facts and not the opinions.”

Shoshan’s work as consul will be far-reaching, with the overall goal of strengthening and promoting diplomatic, economic and cultural relations between the U.S. and Israel in his five-state region. This will include elevating economic ties, managing cultural affairs, creating academic partnerships with universities and importing Israeli art to the United States. Many of these efforts are already underway; for instance, a community in Houston is hosting famed Israeli dance troupe Vertigo for an open event, free of charge. For Hispanic Heritage Month, the consulate is connecting local Latino entrepreneurs with Israeli knowledge and mentorship, with an eye toward strengthening trade and economic ties while benefiting local projects.

“As the ‘startup nation,’ that’s what we want to do: to share Israeli knowledge and experience and tools to benefit people in the communities where we’re serving,” he said. “Houston is so alive and unique and interesting. It’s a hub for so many intriguing economic ventures.”

Shoshan named oil and gas, aviation and biotech as examples of interesting fields in Houston. “It’s a 4-million [person] city, and I’m learning more and more every day [about] the politics and official leadership here.” There is $1.2 billion dollars of trade between the state of Texas and the state of Israel.

Shoshan hasn’t been to the other states in his region yet but is making plans to visit them and get to know the locals. He particularly noted the diversity of Texas, “the state with [many] languages being spoken, a melting pot where people bring their own culture.”

While some Israelis may seek out their fortunes in the United States, his expected tenure will be between three and four years, and focused on the mandate of doing good for Israel. Still, he notes, to become a foreign diplomat is also a “sacrifice,” because he left his family and friends behind at home.

“For me it was always about how can I benefit Israel the most,” he said, from his army service to “creating social projects, leading [nonprofits], and working in the private sector but always doing business that is good for the community and society.”

He added, “You can’t win a marathon in a single day. You learn to pace [yourself] and gradually grow each step of the way.”