U.S. Jewish communities are commissioning a flood of new population studies — and figuring out how to use them

The Cohen Center for Modern Jewish Studies at Brandeis University is working on surveys in 10 communities – double its work from a few years ago – including some of the largest Jewish populations in the country. 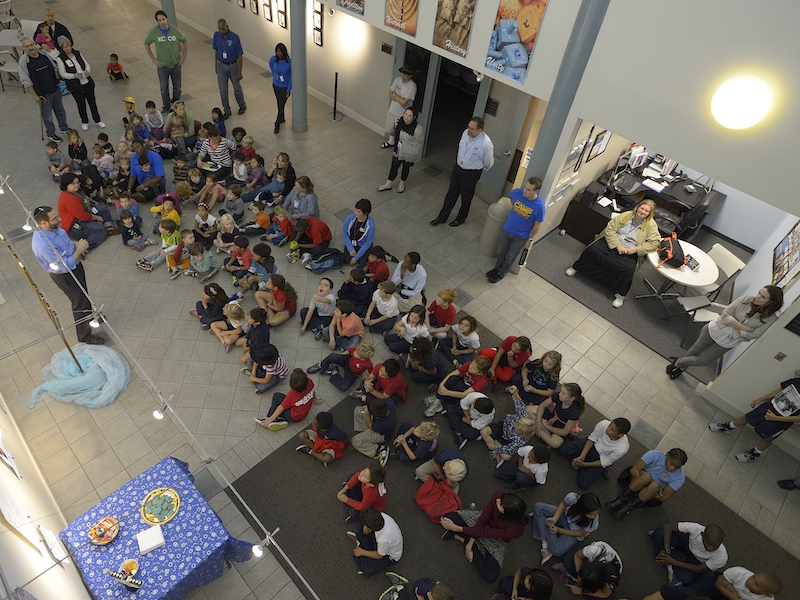 Rabbi David Cantor lights a candle on the first night of Hanukkah with children at the Alpert Jewish Community Center in Long Beach, Calif., in 2013. Long Beach is one of many Jewish communities whose population is being evaluated in a new study.

When Derek Gale started a fundraising job at the Jewish Federation of Greater Kansas City in 2013, he didn’t think much about the demographics of the community.

But a few years later, working on grant allocations, Gale had questions.

“What [programs] are we being asked to fund…and why, and who are they serving?” Gale, now the Kansas City federation’s COO, told eJewishPhilanthropy. “And that takes you down the road a little further, of, who are we?”

Gale had no good answers — Kansas City’s last Jewish community study was in 1985, and a smaller demographic snapshot from 2008 didn’t feel relevant anymore. “It would behoove the community to have some more data,” he found himself thinking.

Now, with a new 2022 study, Kansas City is one of several Jewish communities catching up on studies for the first time in decades, part of a wider trend in the American Jewish community to let data lead decision making.

The Cohen Center for Modern Jewish Studies at Brandeis University, which has conducted a string of communal surveys, has never been busier. Between writing proposals, planning surveys, processing data and issuing finished reports, the center’s team of eight researchers is working on studies in 10 communities – double its work from a few years ago – including some of the largest Jewish populations in the country, like Los Angeles’.

But as the flood of new numbers comes in, researchers and federation employees worry that communities won’t necessarily know what to do with the data once they’ve got it.

It’s “a really big cultural change,” said Ruth Raskas, chief impact and growth officer at The Jewish Federations of North America (JFNA). “Historically…thinking about [key performance indicators] and metrics and data in the way that consumer companies do it in 2022 hasn’t always been [in] the DNA of many nonprofits.”

The demand for new surveys comes amid a wave of organizational changes in the Jewish world. Some communities have seen institutions merge — including federations  that have combined with other local organizations like JCCs. The COVID-19 pandemic also changed how many Jews engage in their communities, in addition to having an impact on their financial ability to be involved.

Since arriving in Long Beach, Calif., in 2019, Zachary Benjamin has overseen the mergers of the Jewish federation, community foundation, and community center into one organization: Jewish Long Beach, where he serves as CEO.

The community is now doing its first study since the 1950s. Between the mergers and COVID, “You just had a perfect storm of necessity to do this research,” Benjamin said. “With COVID overnight…JCC models became endangered, and dare I say, irrelevant as well, as suddenly gathering as a community became impossible.”

Benjamin said understanding and serving local needs is key to keeping Jewish Long Beach relevant. He hopes the study will show which Jews aren’t being served by existing programs and how they want to be engaged, which could give institutions the cultural literacy to build trust with the community.

“An alarmingly small percentage of people who identify as Jewish choose to be active in their Jewish communal institutions,” Benjamin said. “Even when they need help …[many Jews] are reluctant to reach out for the assistance that’s available, because they aren’t confident that those institutions are interested in serving people like them.”

The past decade has seen significant changes in how researchers study the Jewish community.

The Pew Research Center’s 2013 Jewish national study cemented new demographic categories — “Jewish by religion” and “Jews of no religion” — which provided a vocabulary for communities to count Jews who didn’t affiliate religiously.

Two years later, beginning with a 2015 study of Boston’s Jewish community, researchers at the Cohen Center created a flexible “index of Jewish engagement” for local community studies. The index identifies Jews by what activities they do — no matter how nontraditional they may seem, rather than grouping people using a demographic category like intermarriage.

“We want to talk to the folks for whom doing Jewish is about volunteering…or eating your ham and cheese sandwich on Yom Kippur,” said Matthew Boxer, assistant research professor at the Cohen Center.

In Kansas City, 35% of Jews were put in a “cultural” category because they eat Jewish foods or follow news about Israel but don’t observe holiday traditions. The 17% of Jews who celebrate holidays at home, but aren’t so involved in Jewish institutions, were labeled “connected.”

Engagement categories are later broken down into more niche demographics: For example, almost a third of the “cultural” Jews in Kansas City are ages 55-64, the highest proportion of any age group.

The index is a big reason why many communities are choosing the Cohen Center to run their studies, as leaders say it helps them better understand how different Jews want to be engaged. But the center’s researchers say it can be a challenge to customize the index for each individual community.

“Should we ask people, do you meditate and do yoga on Shabbat?” said Janet Krasner Aronson, associate director of the Cohen Center. Survey space is limited, but “if you don’t ask about it, you’re not going to capture it.”

That’s a larger lesson the center’s researchers learned in 2015 during their study of Boston’s community. For years, the researchers had avoided asking questions about LGBTQ Jews or other Jewish minority groups, worried there wouldn’t be enough to survey for meaningful analysis.

Then Boxer heard from LGBTQ Jewish activists in Boston that they’d like to be represented in the data.

“As someone who comes from a background where I was often the only Jew in the room…I felt a little bit ashamed that that didn’t just occur to me,” Boxer said. “Even if all we can do is remind people that there are Jews of color, there are LGBTQ Jews, they are part of your community…it’s still worth doing.”

“Counting Inconsistencies,” a 2019 report by the Jews of Color Initiative estimating the number of Jews of color based on existing population studies, also pushed Brandeis to pay more attention to overlooked Jewish subgroups.

Some communities, like Kansas City, had an extra incentive to learn more about their demographics. Since 2019, The Harry and Jeanette Weinberg Foundation has provided more than $1 million in grants to JFNA and other partners to support part of the cost of 15 local studies. In exchange, surveys had to include questions about poverty, LGBTQ Jews and Jews of color.

Today, researchers are wrestling with whether their role extends beyond just collecting and presenting data to communities. Having such an influence on Jewish life is “a sacred responsibility,” Boxer said. He stops himself from directly telling communities what to do with the data, even if next steps seem obvious to him.

But after seeing how many communities don’t use the studies they pay for, Aronson, the center’s associate director, wants to push for more action.

“I’ve been struggling with this issue about how to use the data for a while,” she said. “I would really love to focus on that and work with communities…[to] come up with a better plan up front.”

One community, shortly after a study, hired someone to serve in a community planning position. The hire reached out to talk to Aronson about the study.

“I said, ‘Well, have you looked at all this other data?’ And she said, ‘What other data?’” Aronson recalled. “All she had was the PowerPoint…that’s all she had ever seen, and they spent a boatload of money on that study, and it broke my heart.”

Digging into the data

In 2019, Keith Dvorchik became executive director of the Jewish Federation of Greater Orlando after it merged with the local JCC, where he is also CEO.

Soon afterward, the Orlando federation commissioned a community study for the first time in almost 30 years. It designed the study, which came out in December, with follow-up action in mind, and is already applying the data

“We learned that if we focus on family and holidays, that interests 70% of our community,” Dvorchik said. ”The numbers show that. For our big Hannukah party that happened in the middle of Omicron, we still had 450 people registered and over 400 people show up. We just did a food truck Shabbat, and we had 250 or so people.”

Many communities are slower to react, organizing strategic planning task forces only after studies are released. “By year five, six, the data begins to get stale,” said Jessica Mehlman, associate vice president of impact and planning at JFNA.

To get data to communities more quickly so they can act on it, JFNA is looking to analyze existing community studies for common trends, she said, instead of funding new ones. Researchers say that some Jewish engagement trends are already clear from recent studies, and that communities should spend their money on programming to address those trends, rather than another data set.

“We have to think about, does every community in the United States actually have to do a $300,000 to $400,000 study that counts their Jews?” Mehlman said. Aronson agrees that not every Jewish community needs to gather its own data to be successfully data-driven.

“Communities like to ask, ‘What’s special about us?’ The truth is…there’s so much in common,” she said. “I hope that they can learn from each other more and not have to reinvent the wheel.”