Rabbi Irina Gritsevskaya has traveled into Ukraine multiple times since the beginning of Russia's invasion in order to bring menorahs, Passover food and more to a growing community. 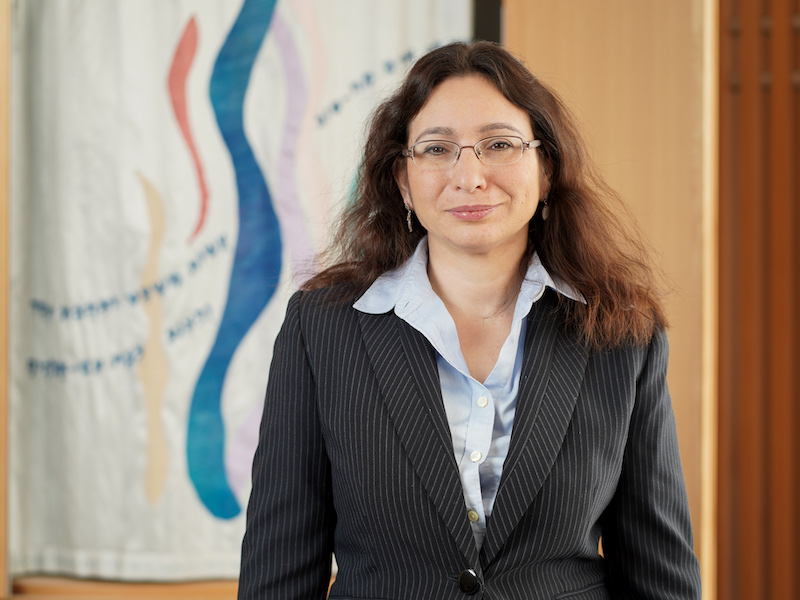 Rabbi Irina Gritsevskaya has gone into Ukraine several times since the beginning of the war.

Since Russia’s invasion of Ukraine began more than nine months ago, countless Jewish leaders have traveled to the region bearing duffel bags of medicine, clothes and hygienic products.

Rabbi Irina Gritsevskaya has been one of those couriers. But along with humanitarian supplies, her bags have been filled with items she considers spiritual necessities: stacks of haggadot for Passover, a megillah for Purim and, soon, dreidels and other goods for Hanukkah. One of her first trips into Ukraine came on March 16, as thousands were streaming the other direction across the border, to help a community on the Romanian border with a growing number of internal refugees celebrate Purim.

“I went for Purim because we helped a lot with financial help, with money, with food, renting houses, evacuation,” Gritsevskaya, who was born in St. Petersburg and moved to Israel as a teenager, told eJewishPhilanthropy. “This time, we thought, there’s also food for the soul that we need to provide.”

Gritsevskaya, the director of Midreshet Schechter, a Conservative Jewish adult education seminary in Israel, has become the leader of an effort by her movement to aid Ukraine’s Conservative Jewish communities, which serve hundreds of families across five cities, and support their refugees.

In total, the Schechter Institutes — her seminary’s parent organization — together with the global Conservative group Masorti Olami have spent some $400,000 on the effort, helping thousands of refugees. The country’s Conservative Jewish camp also relocated to Romania this past summer.

But beyond making sure the refugees are safe and cared for, that aid has also gone toward sustaining a burgeoning Conservative Jewish community in the western Ukrainian city of Chernivtsi, close to the border with Romania. While it’s hard to say how much that community has grown, owing to the coming and going of refugees, community leader Lev Kleyman estimates that average synagogue attendance on Shabbat has roughly doubled — drawing 50 or 60 people to a Saturday morning service now, as opposed to 20 or 30 before the war.

Along with bringing ritual objects to the Chernivitsi community — Gritsevskaya has traveled there for Purim, Passover and Yom Kippur, in addition to trips to help get refugees out of the country — her initiative has fundraised the building of a new Torah ark for the congregation.

“One of the things that you understand in those places is that sometimes that’s what our holidays are about, to bring happiness to places where it’s hard,” Gritsevskaya said. “It is not going to end soon, it’s a long, long process we have to go through… One of the most important things, [to] me, for people in Ukraine to understand is that they are not alone — whatever is going to happen.”

Kleyman said that for some refugees, joining the community has proven an adjustment. Some were not accustomed to taking part in Jewish observances at all. Others had never encountered egalitarian Judaism. And the community includes people who are exploring Jewish conversion as well.

“We had a lot of Jews who were attending their first Purim” celebration, Kleyman told eJP. “We still have refugees who [say], ‘Until the war started, I didn’t understand why people believed these things, why they kept Shabbat. Why do they not use their phone on Shabbat?’…But when they got here, they said, ‘Now I understand what a community is for and what people believe.’”

Now, a typical week in the community includes a schedule of classes throughout the week — ranging from a seminar on Jewish history to Jewish conversion classes to conversational Hebrew, to help those preparing to move to Israel. On Friday nights, community members gather for services and dinner, with some staying as late as 11 p.m. to sing together and play games. There’s also a lunch on Saturday afternoon following services, which is largely attended by refugees. Kleyman said there’s been little if any tension between the existing community and the new arrivals.

“I can’t remember anyone who didn’t want to help,” Kleyman said, adding that members of the community who lived in Chernivtsi before the war now feel that the refugees “are already part of our community. They live in Chernivtsi. They’re one of us.”

Kleyman and Gritsevskaya likewise said they haven’t had compunction about spending money on ritual objects as opposed to saving it for humanitarian needs. Gritsevskaya said her ferrying of Jewish supplies is a response to demand. In addition to the dreidels, she will be bringing gifts for children, smoked meat and a warming plate the community can use on Shabbat. Before her trip, others will be bringing the community menorahs, candles, kippot and winter items such as sweatshirts and blankets. Those goods, in turn, will be repackaged and sent to other Ukrainian Conservative communities.

She’ll also be running a training for counselors in the local Conservative youth group, and may visit another city in addition to Chernivtsi.

“The basics is to help people to survive, right?” Gritsevskaya said. “But the moment you have it, it’s actually about having the spirit and it is very important to the people. They decided it’s important and that’s why we are there to provide it.”

When she first entered Ukraine in the early weeks of the war, Gritsevskaya said she was scared, as “We were basically the only people to cross the border in[to] Ukraine, and many, many, many people — basically women and children — were going toward our direction.” But she’s gotten used to the trip as the war has progressed.

Now, she and Kleyman are both worried about how the community will survive the winter, as Russian attacks have interrupted the country’s utilities. Kleyman said that Chernivtsi now alternates giving homes electricity and water throughout the day, but can’t provide both at the same time.

“We are trying to have all our enterprises running notwithstanding the situation,” Gritsevskaya said. “We just hope we’ll have electricity.”