Hilma bills itself as a socially conscious alternative to the military-training programs and hyper-competitive professional market that drive Israel’s tech industry. 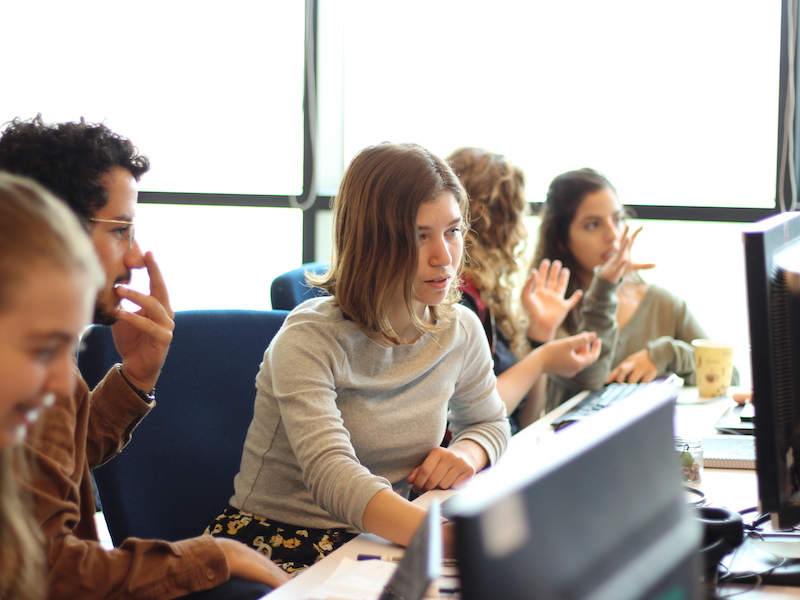 Participants in Hilma work at their computers.

When 18-year-old Nati Dereje approached his draft date for the Israeli army last year, he says he was offered a variety of “logistical jobs” — desk work, maybe a little driving — that didn’t entice him. Instead, he opted to serve his country from in front of a computer screen, enlisting in two years of national service with a nonprofit called Hilma, which teaches young Israelis to create tech products that benefit marginalized groups and charitable causes.

Now, he’s working on a project that will enable theaters and concert venues to donate any unsold tickets to nonprofits, which will distribute them to low-income populations that otherwise would not be able to attend the performances.

“I felt it was for me because I love the world of computers,” he said of Hilma. “My whole family thought I would join the army… I came here because I felt like I would have a greater impact.”

Dereje is one of more than 100 Israelis to take part in Hilma (a Hebrew acronym that stands for “high-tech for society”), which bills itself as a socially conscious alternative to the hyper-competitive professional market that drives Israel’s tech industry. At a time of rising concern both within Israel and abroad over the ethical implications of Israel’s outsize tech prowess, Hilma hopes to convince its participants that they can develop programs that will allow them to make a difference.

Hilma has an annual budget of approximately $2 million and runs two programs — one for people entering Israel’s national-service apparatus, and another for people who would have enlisted in the military but received an exemption. It is also opening a program for recently discharged combat veterans, and has also begun taking interns from overseas. Thirty people enter Hilma each year, out of 250 who apply. And Dereje, a Christian Ethiopian-Israeli, is an outlier; of Hilma’s graduates and current participants, 85% are religious young women. The more than 60 apps they have created have attracted more than a million total users.

“The time had come for Israel to be on the map of social-impact tech, tech for good,” Yossi Tsuria, who founded the organization more than four years ago after a decades-long career at tech firms, told eJewishPhilanthropy. “Israel leads the world in many areas in tech…. But in tech for the elderly, tech for youth on the autism spectrum, tech for youth with disabilities, we aren’t leading.”

Hilma isn’t quite a rebuke of Israel’s tech scene — some of its volunteers who help guide the enlistees work for NSO, as well as tech giants like Facebook and Microsoft. In addition, a paid faculty of eight to 10 veteran tech employees teach and work with the participants, who get two months’ intensive training in tech at the program’s outset. But Tsuria hopes Hilma can demonstrate that its products can be profitable, too.

“There’s a business opportunity here and a moral opportunity that Israel will lead the world in this type of development,” he said. “This isn’t a program to lead people to work at Facebook. In practice, some of the people will work at Facebook, and will be very satisfied, and that’s fine. But my real goal is… that even if these guys do go to work at Facebook, after a few years, they’ll say, ‘Hey, we saw when we were at Hilma that you can take on a project and change the lives of a certain population.’”

Hilma’s products range from an app to help kids read (called Capish) to Songo, a motivational exercise program. Others are targeted toward Jewish interests, like one that offers a guided virtual tour of Yad Vashem, Israel’s Holocaust museum, or another that enables people living alone to hear the shofar during the High Holiday season.

One product that has broken into the Israeli market is called HospiKol — an innovation on the call button hospital patients press to summon a nurse. Instead of one button, the app allows patients to distinguish between, say, requesting a blanket and asking for pain relief (patients without the wherewithal to toggle between options can still press a panic button). The app also allows the hospital to better track individual patients’ quality of care.

“It gives you many more possibilities, it’s all digital, it’s just better,” Simcha Yagel, director of the Hadassah Medical Organization’s obstetrics and gynecology department, told eJP. “The button is the same as it was 40 years ago. We haven’t advanced. It’s clear we need something digital, and it’s crazy that we’re lagging.”

Yagel’s department currently uses HospiKol for 26 patients. One day, he predicted, “It’s going to be in all the divisions in the country, in every hospital.”

Noam Moshe, 20, who attended a Chabad girls’ school in the southern city of Ashkelon before completing two years with Hilma, acknowledged that the program is unlikely to spark a transformation that will lead Israeli tech companies to focus on altruism.

“The social-good interest – there’s not a lot of market for it,” said Moshe, who now works for Hilma. “Mostly, I think the first thought [of entrepreneurs] is to do things that are not socially conscious, [and] in Israel, we’re a small market because of our language.”

But she added that personally, she plans to place her skills in service of a good cause. As a resident of southern Israel, which has been battered by rockets from Gaza in Israel’s recent armed conflicts, Moshe said she hopes to one day work on an innovation like Israel’s Iron Dome missile-defense system.

“I was bitten by the bug of socially conscious tech,” she said. “If I look for a workplace, it will definitely be a place that — maybe it won’t be 100% dedicated to contributing to society, but it needs to be at least around 60%.”