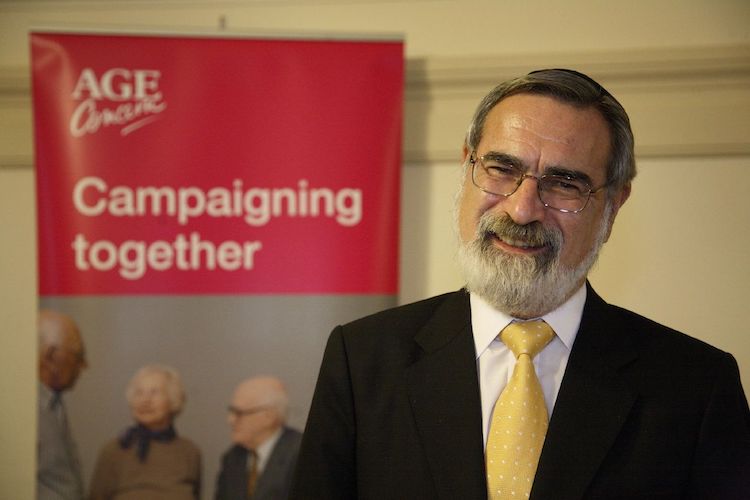 A year after his death, relatives of the late Rabbi Lord Jonathan Sacks are ensuring that the former U.K. chief rabbi’s teachings carry on, in the form of an international trust that will collect and translate his writings and, in the case of audio and video, transcribe them for a global audience. “Rabbi Sacks was the leading world voice trying to address the issues of why we should be proud to be Jewish regardless of what our affiliation might be,” Alan Sacks, the rabbi’s brother, told eJewishPhilanthropy’s Helen Chernikoff. “Rabbi Sacks isn’t here to do that anymore, and our mission is to make sure his message isn’t lost.”

Based in the U.K., Sacks and Elliott Goldstein, the rabbi’s son-in-law, as well as the Rabbi Sacks Legacy Trust’s chief executive, Joanna Benarroch, are in the United States to introduce the initiative and its vision to potential supporters. Debby Ifield, Rabbi Sacks’s former office manager, and Dan Sacker, his former communications strategist, will also be employed by the trust.

Central to that mission: conveying the rabbi’s conviction that a person can be both completely committed to Judaism, and completely engaged in the world, Alan Sacks said: “He was a deeply learned scholar who managed to see the entire modern world through his scholarly lens without blocking out any of that world.”

The trust, which is partnering with Yeshiva University in the recently announced Sacks-Herenstein Center for Values and Leadership, aims to reach people in the United States; British Commonwealth countries such as the U.K., Canada, South Africa and Australia; Israel; Russia; and South America.

In the U.S., the trust will operate as the Covenant & Conversation Corporation, a 501c3, whose trustees are Alan Sacks, Goldstein and philanthropist Naomi Hass-Perlman. Educators will turn materials into curriculum in the hope of infusing the rabbi’s thought throughout the Jewish world via its teachers. In Israel, the trust’s goal is to create a think tank where new leaders can be developed and trained to tackle critical social and political issues, such as climate change, and to offer curricula to teachers.

Based in the U.K., Sacks and Elliott Goldstein, the rabbi’s son-in-law, as well as the Rabbi Sacks Legacy Trust’s chief executive, Joanna Benarroch, are in the United States to introduce the initiative and its vision to potential supporters. Debby Ifield, Rabbi Sacks’s office manager, and Dan Sacker, his communications strategist, will also be employed by the trust.

Israel especially needs the rabbi’s pluralistic ideas, because it is a society in which the extreme right and the extreme left each claim to have a monopoly on truth, Alan Sacks argued. Rabbi Sacks forged a middle path by embracing varied sources of knowledge, including, according to his brother, Scripture, Shakespeare, Rembrandt, filmmaker Clint Eastwood and rapperEminem.

The trust is establishing an Israeli advisory board, which Alan Sacks will chair.

Alan Sacks offered “10 Paths to God,” a 10-unit curriculum on Judaism and Jewish identity, as an example of how the trust will adapt the rabbi’s work for broader audiences.

“I don’t care if you drop the name of the author, the message is what matters,” Alan Sacks said.