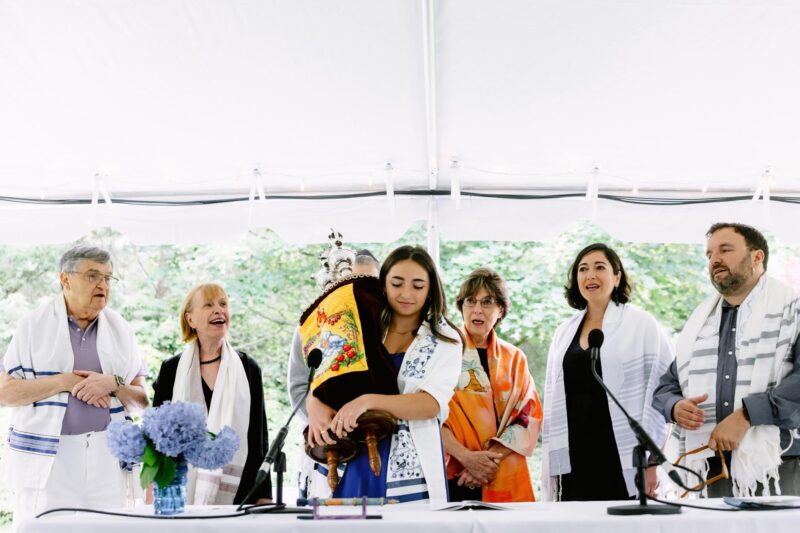 As young people approach b’nai mitzvah age, grandparents can provide an increased sense of connection to family and Jewish tradition, according to a new report from The Jewish Grandparents Network (JGN). The report, “Reimagining the Role of Grandparents in Their Grandchildren’s B-Mitzvah Experience,” is based on findings from a two-afternoon virtual symposium in May, in which Jewish leaders, educators, ritualists, grandparents and teens from across the country gathered to think expansively on the subject. The report builds on a first-of-its-kind 2019 national study by JGN, which generated findings on the role that Jewish grandparents play in the lives of their grandchildren.

JGN received a one-year Covenant Foundation Signature Grant for an initiative — “To Every Thing There Is a Season: Life-Stages Curriculum for Grandparents and Grandchildren” — to develop personally meaningful experiences, rituals and ceremonies at significant life stages in the relationship between grandparents and their grandchildren. The one-year grant is renewable for a second year.

The original 2019 study “identified the important roles that grandparents play in their grandkids’ lives, and the commitment that they have, to their grandkids being involved in Jewish life, being connected to Jewish traditions and Jewish customs and values,” JGN co-founder and CEO David Raphael — a grandfather of two — told eJewishPhilanthropy.

The report identified four key areas in which grandparents (or other close elders) can play a significant role with the grandchild in the b’nai mitzvah experience: family legacy, family values, study and Jewish text, and travel and outings. Terry Kaye, JGN’s associate director and director of creative partnerships (and “Gran” to five grandchildren) told eJP that JGN is developing content — accessible to all regardless of Jewish background — that provides concrete ideas or rituals in which grandparents can become more involved, whether it’s ritual performance or working together on a course of study, or a project like making a tallit together and sharing it on the day of the b’nai mitzvah experience.

“In the lives of our families, there are some key liminal moments that provide amazing opportunities to bring together the intergenerational family,” Raphael said. “It’s a liminal moment, not just for the bar mitzvah kid but for the grandparents… So we wanted to think about how to get past the American Jewish b-mitzvah paradigm — put on a tallis, read the Haftorah, throw candies and have a party,” and rethink grandparents’ involvement.

Toward this goal, JGN brought in an anthropologist to talk about and identify core elements of coming-of-age rituals in cultures around the world. The elements included some kind of trial or challenge, often physical, chanting and dancing, roles for the young person’s peer group, and a role for elders in the community, Raphael said.

“We kind of took a step back from just saying, ‘OK, let’s think about bar mitzvahs as we’ve known them,’ and said, ‘OK, what do we know about coming-of-age rituals? And what makes coming-of-age ceremonies, and what makes rituals meaningful?’”

JGN was originally formed in 2017 in co-founder Lee M. Hendler’s backyard to engage, educate and celebrate the role of grandparents as an essential Jewish influence with enormous potential for impact. As the pandemic loomed, a 2020 grant from the Marcus Foundation enabled JGN to begin creating content that would be available virtually, would be accessible by people from all backgrounds and traditions, and would celebrate the increasing diversity of today’s Jewish families. The Marcus Foundation awarded a second two-year grant for JGN to continue building their content, hosting webinars and building partnerships with Jewish organizations and communities.

Released in 2019, the national study revealed that less than half of grandparents are currently engaged in key elements of organized Jewish life. Two out of five grandparents belong to or participate in a synagogue, temple or minyan and far fewer are involved in a local or national Jewish organization or JCC. A third reported that their ideas about child-rearing conflicted with those of their adult children, and one-in-10 find grandparenting to be “generally stressful.” More than half, 53%, of grandparents have at least one grandchild being raised in a multifaith family and interfaith family, so grandparents may need to tread carefully and be respectful of parental choices, Raphael said.

Raphael noted that one fear grandparents have is their adult children forbidding access to their grandkids. “So how do you pass on Jewish values in a way that is welcoming and supportive and recognizing that our families come from different places, and […] be mindful and respectful of the role parents carry?” he said.

Additionally, Raphael said, 40 percent of grandparents live five hours or more away by car, train or bus from their grandkids.

“It’s a deep source of expressed pain when grandparents live far away,” said Kaye. In response to questions about connecting with grandchildren across great distance, Kaye said, JGN created The Family Room, a space on the JGN website “that offers experiences for grandparents to enrich their relationship with their grandchildren, and gently infuse some Jewish tradition, some cultural culture and values,” across nine categories including arts, family stories, cooking and food and the environment.

“We had to make engagement around virtual communication more three-dimensional,” said Raphael. “Our kids were Zoomed out. So it just couldn’t be ‘let’s talk to bubbe or zeide using FaceTime,’ [but] ‘can we create activities that we can engage in together using virtual media.’”

The Family Room’s 95 different activities and resources were written by more than 70 content contributors; some of them are from organizations, while others are compiled by individuals sharing family stories. Ranging from dancing to yoga to arts and environment, the activities are designed to bridge the distance between grandparents and grandchildren. For example, Kaye said, one activity encourages users to make a family portrait with artist Hanoch Piven; another enables users to learn from educator Ron Wolfson (“Zaydie Ronnie” to two grandchildren) about how to cook with one’s family and a third features JGN’s president, Ilene Vogelstein (“Bubba” to five grandchildren), on finding “Shehecheyanu moments,” imbuing the everyday with meaning.

Several thousand users have visited The Family Room, Kaye said, and several hundred have registered for JGN live events. Webinars are often conducted in partnership with other organizations; a recent program on how grandparents can better understand and engage with transgender or nonbinary grandchildren was in partnership with the Union for Reform Judaism and Keshet, and one upcoming webinar with 18doors centers on grandparenting during “present holidays” (Hanukkah and Christmas, geared toward multi-faith families).

The organization is seeking to reach more people through partnerships, Kaye said, whether through the Jewish Community Center Association of North America or in collaboration with local organizations and synagogues.

These are all pilots, Kaye added, “because whatever we learn from them, we will filter out right to our community.” She added that JGN and partner organizations are developing best practices from this with the goal of involving and integrating grandparents into all community organizations and synagogues.

For instance, Kaye said, some organizations reported interest in Family Room content, but found it hard to translate in an intergenerational setting; a partnership with the Jewish Education Project in New York supported the creation of program guides, to help organizations use the content in a group setting: providing lists of needed supplies or materials, as well as a script, guides on program timing and follow-up, etc.

Kaye clarified that JGN is firmly staying in the lane of increasing engagement for grandparents, not seeking to undermine the synagogue b’nai mitzvah experience. “It’s meant to enhance and reimagine the grandparents’ role in b-mitzvah,” she said.

“Grandparents play essential roles in the lives of today’s multigenerational families as transmitters and advanced users of Jewish life and wisdom, and customs and values,” Raphael said. “And not only should the community engage them as supporters and partners, but also help them carry out those really important roles.”