Moving Traditions’ plan calls for the organization to increase its budget by approximately 23% while reaching double the number of teens. 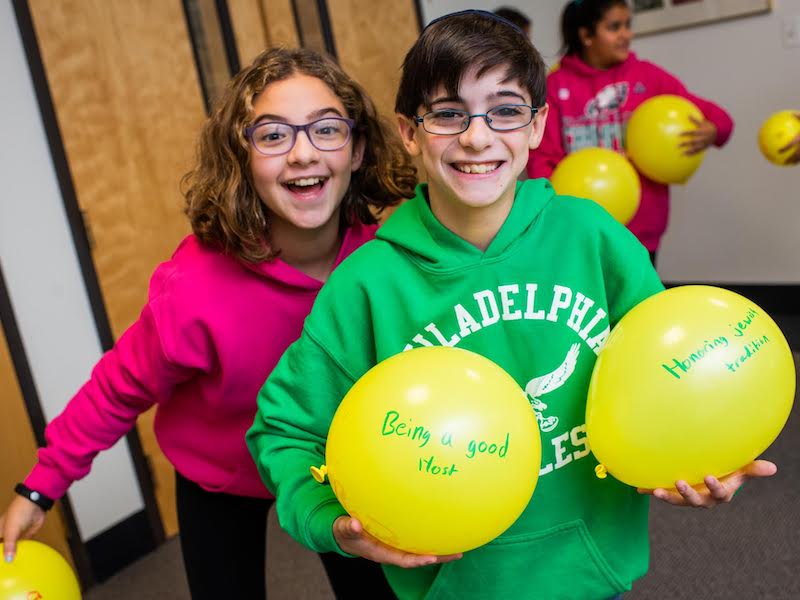 Children at a Moving Traditions event.

How do you teach teenagers to feel comfortable with who they are at a time when norms of identity are shifting? And how do you help them maintain that sense of self as they project their passions onto an unfamiliar and sometimes hostile wider world?

Those questions have inspired and bedeviled generations of teachers, medical professionals, parents and teens themselves. They have received more attention since the beginning of the COVID-19 pandemic. And they lie at the center of a new strategic plan from Moving Traditions, which guides Jewish preteens and teens through discussions surrounding adolescence, gender and discrimination.

“If we want to authentically engage young people today with Judaism, there’s a very small group of things that they’re feeling connected to,” Moving Traditions CEO Shuli Karkowsky, who took the post earlier this year, told eJewishPhilanthropy. “Finding their own sense of self and well-being and identity is a really good way to connect people back to Judaism… The other thing is giving them the tools to be leaders in the causes they care about.”

Reaching more teens, and promoting the group’s emphasis on teen mental health and identity across the Jewish community, are the centerpieces of the strategic plan, which is being published today, and which eJP obtained ahead of its release. But beyond building the teens’ confidence, the organization will also work with the adolescents and their parents and teachers to address a series of sensitive topics — from teens’ gender and racial identities to discussing Israel in progressive spaces.

“We’re always going to retain both our feminist and gender justice lens, which are very much a part of what anchored Moving Traditions since its founding,” Karkowsky said. “And we’ve evolved into a world where identities are multifaceted and no one is just Jewish or just a woman or just cis or just trans, they carry this multitude of identities.”

The strategic plan comes at a time when teen mental health is commanding increasing national attention and resources. A study this month from the Centers for Disease Control and Prevention found that the disruptions of the pandemic “have exacerbated concerns about adolescents’ mental health and suicidal behavior,” echoing the findings of previous studies.

Teen mental health has also become a focus of the Jewish community. BeWell, a $2.75 million program launched this year by the Jewish Federations of North America, brings local Jewish agencies to address the issue. Mental health programs and funding for campers and staff have also grown at Jewish camps, in addition to local Jewish programs helping teens with mental illness.

“Now more than ever, the community is thinking about it, and I think the best thing that has come of all of this is how connected and closely a lot of organizations are working,” said Gabby Spatt, the executive director of the Blue Dove Foundation, which promotes mental health in Jewish spaces and was highlighted this year by the Slingshot Fund. “There’s a ton of partnership and support.”

Moving Traditions’ plan calls for the organization to increase its budget by approximately 23% while reaching double the number of teens. It rests on three values: well-being, or helping each youth be “at peace with one’s whole self”; caring connections, or building relationships and communities; and justice, which the group sees as transforming the wider world.

The organization hopes to achieve those goals through three prongs. The first is doubling the number of teen participants in its groups from 5,000 to 10,000 by 2025. At present, Moving Traditions runs separate chapters of discussion groups for boys, girls and LGBTQ+ youth. It also runs a “B-Mitzvah” program for families of adolescents approaching their b’nei mitzvah, and a program that exports their curriculum to Hebrew high schools. Across its 17-year history, Moving Traditions has reached more than 28,000 teens.

In addition, it runs a fellowship for 10th to 12th graders, training them to become feminist activists, and is launching a new leadership program for teens focused on racial and gender justice. In 2025, the organization expects more than 100 teens in total to be in both programs.

“It’s both teaching young Jews to be anti-racist within Jewish institutions, but it’s also training them to be proud Jews as they enter really progressive spaces that might not be as welcoming to those Jewish identities,” Karkowsky said regarding the new fellowship. “It’s not about an agenda, but it is about making them comfortable understanding how they feel about Israel, and [that] they’re able to defend their opinions about Israel in any kind of space.”

The second prong of the plan concerns the children’s parents and educators. The organization hopes to reach 10,000 parents and grandparents of teens by 2025, and to increase the number of educators who run its B-Mitzvah program from more than 500 today to 700, reaching 6,000 teens. In addition, it hopes its training programs reach 1,000 professionals and volunteers per year who serve youth.

Karkowsky said that while parents and grandparents of teens may not be as open to embracing a broad spectrum of gender identities, they are all invested in supporting their own kids, which the B-Mitzvah program hopes to help them do.

“Even parents who might be opposed to a particular agenda are extremely invested in supporting their kid with what their kid needs,” she said. “And I think it’s powerful that our program is giving them the tools they need to be the parent they want to be to that child.”

The plan’s third prong involves increasing the budget from approximately $3.5 million this year to more than $4.3 million in 2025. The staff is also slated to increase from 24 employees to 33. The money for that budget increase is not yet all nailed down, but the organization has been invited by several foundations to submit applications for additional funding.

“This is about scaling,” Karkowsky said. “It’s about taking something we know works and making it bigger. And that’s really at odds with a lot of strategic plans, which kind of fetishize new ideas: What can we try that we haven’t tried before?”

Karkowsky said this new expansion does not mean that the organization’s participants will be tasked with spreading an ideology across the Jewish community. At its core, she said, the mission remains the same: to support the youth, whoever they are.

“When it comes to young people, they do not have to carry on our agenda,” she said. “Our only job is to actualize whoever they want to be. It’s not their job to change the world.”

CORRECTION: This article originally stated that the Jim Joseph Foundation and Crown Family Philanthropies would be funders of Moving Traditions’ budget increase. In fact, the foundations were funders of the strategic planning process.