A recent Prizmah survey found that 72% of new students who enrolled because of the pandemic in the fall of 2020 were still in Jewish day schools at the beginning of the current school year. 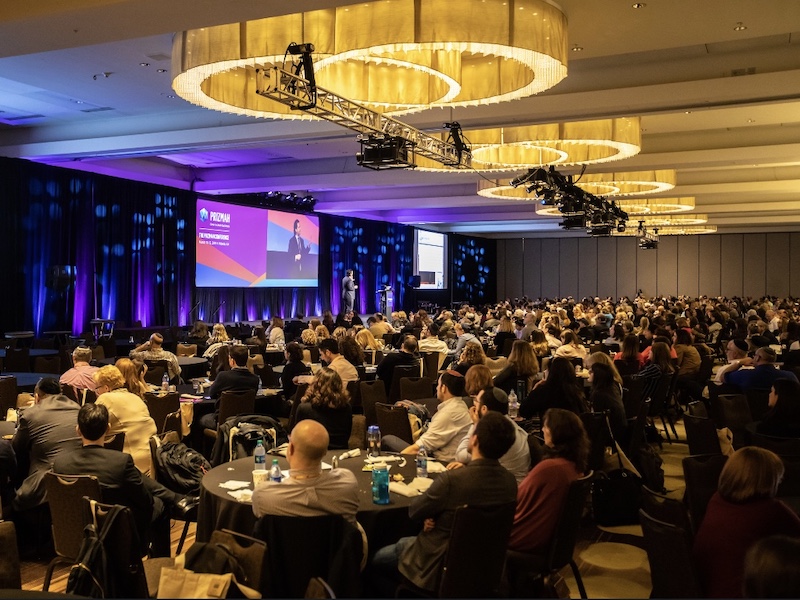 The 2019 Prizmah conference in Atlanta.

The third page of the annual enrollment study conducted by Prizmah features a box with a light blue background and bold white type, informing readers that from last school year to this one, among the 136 Jewish day schools surveyed, enrollment grew 0%.

What that goose egg means, Bernstein told eJewishPhilanthropy, is that day schools are maintaining the gains they achieved during the pandemic, when students streamed into Jewish schools that were largely meeting in person when many other schools were largely not.

Furthermore, he said, it means that as inflation rose over the early side of 2022, when students had to enroll, parents still opted to pay another year of tuition and sign their kids up again. In the two years before this one, enrollment had risen 2% and 3%, respectively. The survey found that 72% of new students who enrolled because of the pandemic in the fall of 2020 were still in Jewish day schools at the beginning of the current school year, two years later.

“In the early part of the millennium, really accelerating after 2008, declining enrollment in day schools and yeshivas outside of the Haredi sector had been the annual feature, and that’s what led to quite a lot of pessimism,” Bernstein told eJP.

“We might have actually expected some shrinkage and just a little bit of a rebound as people normalized during this period, when we were emerging from COVID,” he added. “So the fact that we had stable enrollment this year is very much a win.”

That approach is buoying Bernstein as he heads into Prizmah’s three-day biennial conference, which begins on Sunday in Denver. And COVID has affected this gathering, too. Because it occurs once every two years, this is the first time the conference is meeting in person since 2019.

More than 1,000 people will be attending this year, including some 100 lay leaders and philanthropists. Prizmah is an umbrella group that provides services such as curricular guidance and teacher and administrator training and networking, and serves schools that range from Orthodox to Conservative to Reform, as well as community and pluralist schools. Haredi schools are generally not affiliated with the network.

The conference’s theme is “creative spirit,” and the featured speaker is positive psychology lecturer Tal Ben-Shahar. Participants at the conference will be discussing topics including Israel education, mental health and wellness. Bernstein also hopes the conference is an opportunity for day school employees and stakeholders to figure out how to capitalize on the sector’s achievements during the COVID era.

“We’re now looking at the world in a very different way,” he said. “This isn’t just a one-year blip. It’s something that is showing itself to be a pattern…  How do we harness the positive perceptions of day schools for the last few years and really grow that, help people understand the value of a day school?”

The survey’s findings were not uniformly positive. While the majority of schools increased enrollment, one-third of schools reported a decrease, including nearly two-thirds of the 16 Midwestern schools that responded to the survey. And most of the schools with fewer than 150 students did not grow their enrollment.

“Even when there is growth overall, not every school is growing,” Bernstein said, adding that Prizmah is asking, “‘How can we help the schools that have had more challenges to strengthen and to be able to grow in future years?’ At no point do we pretend that everything is perfect for every school all the time.”

Another potential concern is the threat of a worsening economy. Bernstein repeatedly said that the Great Recession dealt a blow to enrollment across the board, and if the U.S. enters another recession, he acknowledged that some day school parents may be less willing or able to pay tuition.

He added, however, that a number of philanthropic initiatives are seeking to ease that burden. And he said that, as with many things, the experience parents had with day schools during COVID may have given them a greater measure of commitment to the schools.

“What’s interesting around the COVID experience is the fact that people who may have previously said, ‘Day school is too expensive for me and for my child,’ made the choice when they were forced to,” he said. “They continued to make that choice once they realized how great the day school was by having their kids inside…  Of course, if there is a recession, that is going to impact people’s decisions, but you will stretch yourself for something you see as excellent.”