Intermarriage is an opportunity

While other Jewish movements have been opening their tents wider for a while now, it is exciting to see how the most centrist movement is navigating tradition and modernity in new ways.

When I was newly pregnant in 2001, my partner of another faith and I went “shul shopping,” visiting multiple Jewish congregations to find our spiritual home and community. We arrived at the Shabbat service at a Conservative synagogue and sat down. An usher approached and asked my spouse, “Are you Jewish?” The usher held a kippah and tallit in their hands, ready to hand them over if they answered “yes.” The intention was a good one, however the impact was that we felt alienated and did not join that synagogue. Identity is personal and being asked about one’s religion questions one’s right to be in a Jewish space.

The Conservative movement has evolved in its thinking about intermarriage since my family, and undoubtedly many others, had that personal experience. The “continuity crisis” narrative that dominated communal discourse for decades was based on assumptions that people who intermarry cease to identify as Jewish, be involved in the community, or raise Jewish children. This linear thinking equated intermarriage with extinction, labeled it a “threat” to Jewish continuity, and held communal consciousness in a vise grip until quite recently. It simultaneously ignored change over time, and the rise of new ethnicity, feminism and evolving gender roles found in more interdisciplinary research. Today, Jewish families look different than they did according to the heteronormative and Ashkenormative thinkers who ignored the diversity within the Jewish community. Leaders in the Conservative movement are increasingly eager to embrace the complexity of Jewish families, and there is growing momentum to be more inclusive of interfaith couples, which are often faith/faithless rather than dual faith, or mixed heritages. When I asked Rabbi Jacob Blumenthal, CEO of USCJ and the Rabbinical Assembly, he responded: “Intermarriage is an opportunity, not a curse. We need to stop seeing intermarriage as a failure or betrayal, [and start] seeing that these are people engaged in loving relationships. We need to support them and engage them in loving ways in Jewish life.” In 2017, the USCJ General Assembly made the historic decision to allow people of other faith backgrounds to become members of synagogues, enabling all members of interfaith couples and families to belong. The Conservative movement showed it was interested in learning from the past to build a stronger future when I was invited to speak at the 2019 USCJ/RA biennial convention. Hiring me full-time as USCJ interfaith specialist signals that embracing inclusivity is essential to a twenty-first century authentic and dynamic Judaism. 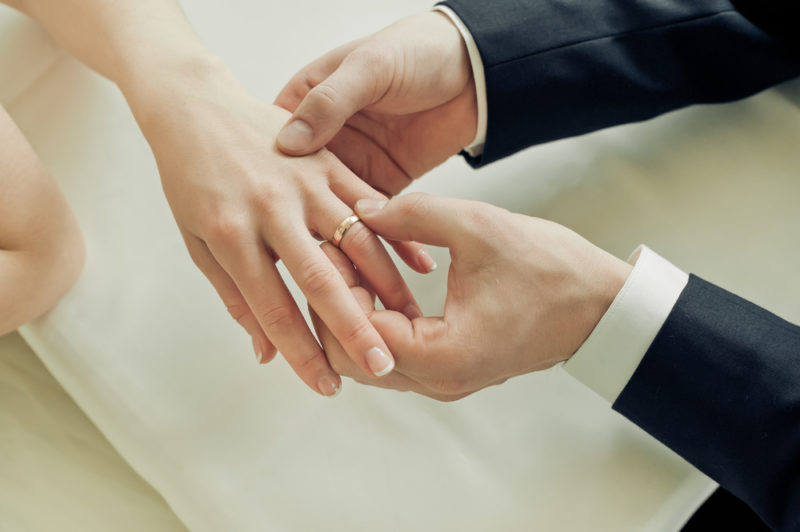 I recognize the duality of asking interfaith couples to find a place within our movement when it does not fully endorse their marriages through officiation. And to be sure, there is a lot of discussion around that issue among our clergy, lay leaders and congregants. The new USCJ/RA cohort program, “Rimonim for Rabbis” (launched February 3) is creating space for learning and sharing across pulpits, Hillels, day schools and more. New approaches to inclusion demonstrate the vital importance of human interactions with all community members. Clergy can build relationships with and show up for interfaith couples and families, including being present on their big day. One rabbi who attended their first interfaith wedding shared with me how important their presence was to the relationship with their congregants. In addition, the sky did not fall. Attendance and wishing mazal tov signal the celebration of two human beings who found each other; it neither condones nor condemns intermarriage. As another pulpit rabbi shared with me, they treat all members as their congregants regardless of who is the Jewish partner.

Recently I had the privilege of presenting a “Taste of Interfaith Inclusion” to more than a dozen synagogue presidents in the mid-Atlantic states. During the Q & A, one president shared that their synagogue follows the “rule” not to wish mazal tov (congratulations) to engaged couples who are interfaith, to newlywed interfaith couples, or to children (or grandchildren) born to intermarried parents. Another president shared that their spouse is not allowed on the bima (raised platform at the front of the sanctuary) because they are not Jewish. Both cases referred to a non-binding teshuvah (Jewish legal paper) from the 1980s, suggesting that “mazal tov” should be reserved for Jewish-Jewish marriages. That outdated premise is part of the old narrative on intermarriage that equated it with loss to the Jewish people and did not have the benefit of new research. Now, however, we know that it is how the Jewish community responds to interfaith couples and families that determines whether and to what extent they engage with Judaism, that demography is not destiny, and that it only takes one Jewish parent to raise Jewish children. Withholding celebratory words does not prevent people from falling in love with and marrying people of other faith backgrounds; it only alienates them. Reserving the bima for Jews, treats everyone else as if they are guests, inhibiting them from truly belonging.

While some Conservative congregations have already changed or are in the process of changing their bylaws to allow people of other faith backgrounds to be synagogue members, others are at the very beginning stages of discussing the cultural shifts within their communities from which the legislative changes could organically follow. Rather than just saying, “No, sorry, I can’t officiate your marriage,” some Conservative rabbis I consult with are now eagerly offering premarital counseling to interfaith couples, building relationships that will support them well past their wedding dates. For years now, some rabbis have been offering aufrufs (pre-wedding blessings) and hanukkat-habayit ceremonies (home dedications) to interfaith couples. Many rabbis are inviting partners of diverse backgrounds to join their Jewish partners on the bima for their child’s b’mitzvah blessing. There also are many rabbis who are unsure how to navigate what they can and cannot do for interfaith couples and families while keeping within the RA’s and USCJ’s Standards. Likewise, congregational presidents and lay leaders are at different stages of interfaith inclusion — some have long-standing committees and others are just beginning to gather stakeholders’ buy-in, assessing needs and seeking guidance, resources, and support.

One of the things that I love most about Conservative Judaism is that it is expansive enough to include both left-leaning and right-leaning (religiously speaking) ideas at the same time. It is in the alchemy of divergent perspectives that gives strength to Jewish revivalism that has long sustained our movement and, b’ezrat HaShem (with God’s help), will continue. While other Jewish movements have been opening their tents wider for a while now, it is exciting to see how the most centrist movement is navigating tradition and modernity in new ways. The Conservative movement has a proven track record of finding meaningful ways to reinterpret Jewish law and transforming itself to be more inclusive for the contemporary world. There are ample opportunities to live our values, treat everyone b’tzelem Elohim (in the image of God), and proactively invite Jews and our loved ones of other religious and/or cultural backgrounds, including extended families, to find belonging and make deep connections that enrich everyone’s lives and communities. That is how we live our values and fulfill these words: “My House will be called a house of prayers for all people” (Isaiah 56:7).

There is much work to do to change the perception that interfaith couples and families are persona non grata in our Jewish spaces. I am grateful for the opportunity USCJ has given me and I invite movement partners to reach out so we can do this sacred work together.

Keren R. McGinity, Ph.D.,  is the interfaith specialist at United Synagogue of Conservative Judaism and a research associate at the Hadassah-Brandeis Institute. She can be reached at kerenmcginity@uscj.org or via her professional website www.loveandtradition.org.