After her son died from a fentanyl overdose, Beth Weinstock founded BirdieLight, an organization that aims to get fentanyl testing strips, which detect the fatal drug, into the hands of every young adult. 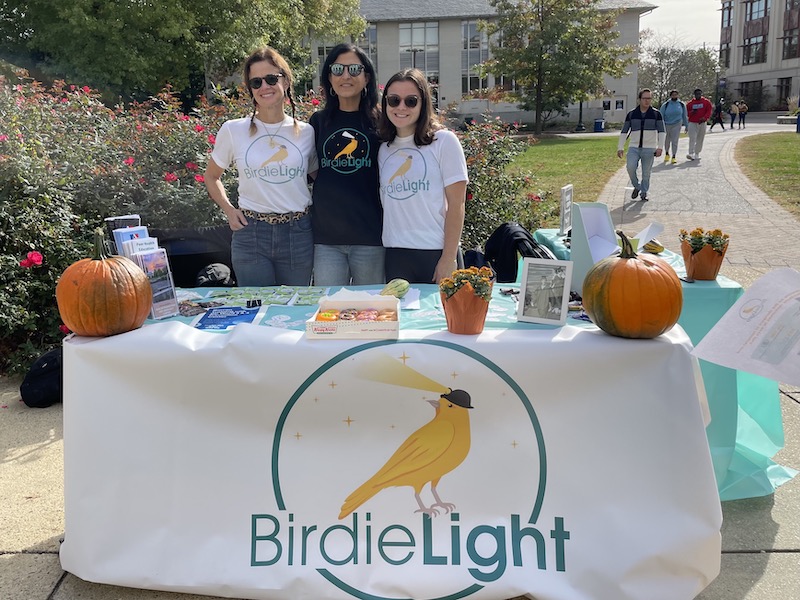 ‘Closer to safe’: BirdieLight’s drive to prevent fentanyl overdoses — with seed funding from a synagogue

This month, a year after her 20-year-old son Eli collapsed and died at his Washington, D.C., home from a fentanyl overdose, Beth Weinstock lit a yahrzeit candle in his memory, did yoga, sang with friends and hosted a potluck dinner.

While these rituals connected her with her community, she told eJewishPhilanthropy, she’s memorializing Eli in another way, too: through BirdieLight, a drug awareness organization she founded last August with her daughter Olivia, which aims to get fentanyl testing strips, which detect the fatal drug, into the hands of every young adult.

Fentanyl is a synthetic opioid that is increasingly implicated in unintentional overdose deaths. According to the National Institute on Drug Abuse, 91,799 drug overdose deaths were reported in 2020; deaths involving synthetic opioids other than methadone (primarily fentanyl) continued to rise, with 56,516 overdose deaths reported in 2020. After Eli’s death, fentanyl was discovered in his body along with Kratom, a legal herbal supplement. BirdieLight’s goal is to increase awareness of how present risk of overdose is — especially among high school and college students — and give them the tools to move, as BirdieLight puts it, “closer to safe.”

BirdieLight’s purpose, Weinstock said, extends beyond “say no to drugs.”

“As long as we can remember, drug use has been a thing in our country, in every country,” she told eJP. “But right now, the waters are poisoned. We acknowledge that there’s people who have different relationships with risk. We try to say that, ‘If you choose a certain level of risk, we’re here to keep you safe.’”

She added, “Inherent in any drug use there is risk, no matter what you’re taking, even alcohol. But we want to get right up to the edge of safe, as close as we can get. If you’re going to decide to try, for example, cocaine, we want our organization to do everything in our power to make that experience non-deadly.”

According to the Centers for Disease Control and Prevention, more than 150 people die every day from overdoses related to synthetic opioids such as fentanyl. Weinstock says that most of the deaths were likely unintentional fentanyl overdoses, “occurring in either one-time or recreational uses of substances and not necessarily those who were struggling [with] addiction.”

Most high school and college students don’t know that some substances their peers may be using recreationally now contain fentanyl, she added. While estimates are subject to change, depending on what is in the supply and what is seized by law enforcement, Weinstock said, commonly tainted drugs are cocaine and counterfeit pills — fake oxycodone, hydrocodone, Adderall and Xanax. Another challenge is that fentanyl is used in medical settings as a painkiller or sedative, for example, before broken bones are set or in preparation for a colonoscopy, for example. But the amount used in hospitals is on the level of micrograms, Weinstock told “The Five-O-One,” a podcast about nonprofits.

“What’s killing people is on the level of milligrams,” Weinstock said on the podcast. “So we’re talking about a very different drug than what they use in the hospital to treat pain or as a sedative…This powerful painkiller that modern medicine could use in controlled ways got hijacked, and now the two [types of fentanyl] are not even close to what’s used in the hospital.”

BirdieLight got its first microgrant — $5,000 — from the Lurie Micro-Grant Program at the Weinstocks’ synagogue, Temple Israel in Columbus, Ohio, shortly after the organization’s founding. The story of the organization’s name is one of her favorites, Weinstock told eJP. When Eli was in middle school, he and his friends called themselves “the Birdies.” So when Beth and Olivia were brainstorming about names, they wanted to include “something quirky about Eli.”

“I said, ‘What about this idea of a canary in a coal mine?’ And that’s the same as the strip right, you know, testing the waters. So we had a beautiful image of a bird, like with the coal light on its head. And so we wrote down ‘BirdieLight,’ and as soon as we did that, we looked at it and said, ‘Oh my god…Eli is [spelled out] right in the middle.’ We swear we didn’t plan it. Since then, our motto has been that everything we do has Eli right in the middle.”

BirdieLight recently became a 501(c)3 organization and is now able to apply for state grant money and federal dollars. Every penny the group raises goes toward fentanyl test strips and efforts to educate young people about them, Weinstock said.

Weinstock hopes to impart to young people that “this is no game. This is dangerous and not fun. And what we hope is just the fact that we’re educating them will keep them from even taking something… Not only do they know about the risk by the time we have done our job, but they know about the test strip, they have them, and know where to find more testers.”

Even if students still choose to take drugs, she said, “at least we know that they have the knowledge to test and hopefully will listen to us and never use anything alone, because a lot of the fatalities are in people who use by themselves.”

To use the strips — which are not currently legal in all states — one has to dissolve whatever substance one is about to take in a small amount of water and test it with the strip. If the test is positive for fentanyl, the BirdieLight team instructs, people should discard the substance; if it’s negative, they should still take safety measures like not using any drug alone, always telling someone they are about to take something and always having someone who knows where to find Narcan, an emergency treatment for opioid overdose.

“Similar to the way we changed the conversation about drunk driving in the 1970s and ‘80s and changed the condom conversation in the 1980s, we are trying to make safety about fentanyl just something that everyone knows and takes the extra step to stay safe,” Weinstock said. Young people who don’t do drugs but know about the testing strips can be helpful in a role similar to that of designated drivers, she said.

“Our dream is to be the gold standard for fentanyl education in this country,” she said. Her goal is to create a “Birdie Box,”a kit that contains an educational video, test strips and marketing material, and to send it to every college in the country, so that BirdieLight’s representatives don’t have to be physically present for trainings on every campus. (The team has 12 events this spring.) Weinstock is currently making connections with groups that are in higher education or collegiate recovery centers. BirdieLight has made presentations to fraternities, including some Jewish ones; to Temple Israel; and to Ohio State University Hillel. Other events are on the books, including a high school presentation at Donna Klein Jewish Academy in Florida in April. She is also hoping to identify students on campus to lead those efforts and “empower the generation that’s being affected by this.”

Weinstock says that people have asked her how she justifies telling kids not to do drugs and teaching them to test for drugs at the same time.

“My thinking is that it’s the same as teaching kids about sex, but not giving them a condom,” she said. “You can tell kids not to have sex until they’re older. But it doesn’t always work. So you know, if we want to think about how to keep our kids alive in this day and age, we have to do both.”