The seminary’s new home will be SketchPad, a coworking space for small Jewish organizations on Chicago’s North Side. 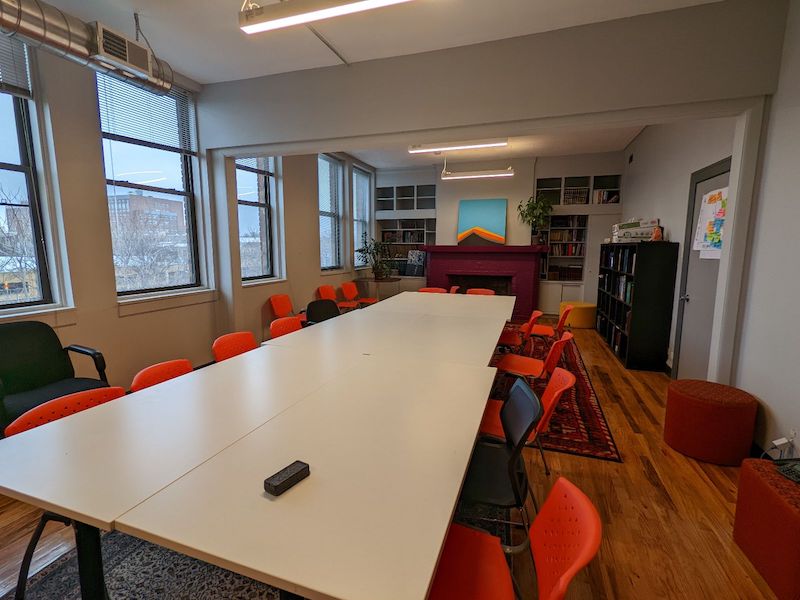 The beit midrash, or house of study, at SketchPad, Hebrew Seminary's new home.

At a time when large rabbinical schools in the United States are seeing declining enrollment and closing down properties, one small school in the Chicago area is bucking the trend.

Hebrew Seminary — a pluralist, egalitarian rabbinical school whose classes are fully accessible to Deaf as well as hearing students  — is growing. Founded in 1992, the school has a $270,000 budget and has ordained only 15 rabbis during its first three decades.

But it now has nine students across its five-year program and is moving into a larger space. A chunk of its students and alumni are Deaf; all students must master American Sign Language as part of their coursework, which can be taken remotely. School tradition dictates that all ordained graduates give a speech in ASL. In addition to courses on the Bible, rabbinics, philosophy, liturgy and more, the school offers classes on Jewish responsa related to the Deaf community, the Talmud’s discussions of Deafness and the mental health of Deaf people.

In January, the seminary will move from its home of more than 30 years — Skokie, Ill.’s Congregation Bene Shalom, a Reform synagogue where the school’s founder, Rabbi Douglas Goldhamer, who died earlier this year, had a pulpit. The synagogue also houses the Hebrew Association of the Deaf and Hearing.

The seminary’s new home will be SketchPad, a coworking space for small Jewish organizations on Chicago’s North Side. Rabbi Jonah Rank, Hebrew Seminary’s new rosh yeshiva, or head, said that the school aims to be inclusive of groups beyond the Deaf community.

“[It’s] a natural extension that we recognize in ourselves and that others recognize in us that we truly do care about Jews from all walks of life, regardless of sexual orientation, gender identity, disability, hearing status, race, ethnicity, physical ability, anything of the sort,” Rank, who is not himself Deaf, and who will be leading the school remotely from his home in Massachussetts with occasional visits to Chicago, told eJewishPhilanthropy. “We see ourselves as keeping our doors very wide open.”

SketchPad was founded in 2017, and most of its member organizations are local offices of national initiatives, like the learning organization Limmud, the LGBTQ group Keshet, the service organization Repair the World and more. A few are locally based initiatives, like the Jewish Council on Urban Affairs, the Jewish Initiative for Animals, Kahal and local consulting firm Tiny Windows, a digital communications consultancy that works mainly with Jewish nonprofit leaders.

Beyond the community of organizations, SketchPad offers Jewishly themed office perks. Membership includes use of a meeting room that doubles as a beit midrash, or house of Jewish study. Offices and conference rooms bear names like “Tachlis” (roughly translated as “bottom line,” for three people to work at a table) and “Minyan” (a conference room fit for a ten-person quorum).

While the shared office amenities are a feature that member organizations will benefit from, said Susan Morrow, SketchPad’s board chair, “it’s really about the collaboration and community.”

The space SketchPad used before the pandemic was full, and when Chicago went into lockdown, Morrow decided to close down and signed the lease on a roughly 10,000–square-foot space down the block, three times the size of the original location, she told eJP. SketchPad moved into the new quarters in 2021. The organization has an annual budget of $375,000.

“We had so many other organizations that wanted to be part of us, and we had no room,” she said. “We are starting now, again, to be able to build our culture of community.”

Gathering these initiatives under one roof allows for cross-pollination of ideas in the communal kitchen and other shared spaces, which can lead to community and collaboration, Morrow added.

“I have a lot of future dreams for what SketchPad will continue to grow and be,” she said, including a vision of the coworking space “in a big building with a shared kosher kitchen and all those kinds of things that continue to add to our community and benefit the smaller organizations.”

The organizations sometimes collaborate on events, and another way SketchPad is helping its tenants is through philanthropy.

This past Giving Tuesday, SketchPad asked supporters to make a donation of $36, half of which could be designated to go to the member organization of the donor’s choice. SketchPad also recently received a grant from Upstart’s Collaboratory to bolster the mission of No Shame on U, a member of the space that seeks to eliminate stigma surrounding mental health challenges.

Wendy Singer, No Shame on U’s director of programming, said that the project will also “help the mission of Sketchpad, which is to create a space where not only are we coworking, but we’re building each other up and helping each other and supporting each other.”

Morrow, who said she has been “philanthropically driven my entire life,” said she loves “giving other organizations an opportunity to learn to do things a little differently, to help them grow and give them opportunities they would not otherwise have without being in a shared space.”

Morrow said that there are one or two offices left unoccupied, and permanent desks and hot desks are available; once a month they do a free co-work day, when anyone can use the shared space and be part of SketchPad for the day, including a happy hour at the end to encourage people to join. Rank is excited for Hebrew Seminary to take part in those opportunities.

“We’re going to be down the hall from a whole variety of different members of the Jewish community,” he said. “And it’s not only symbolic, but it’s very physical, that we are declaring that we are here and we’re part of a larger community.”