out of the ashes

Camp Newman hopes to have 700 beds in the retreat center when it’s fully constructed, and aims to serve up to 20,000 people per year on its campus of nearly 500 acres. 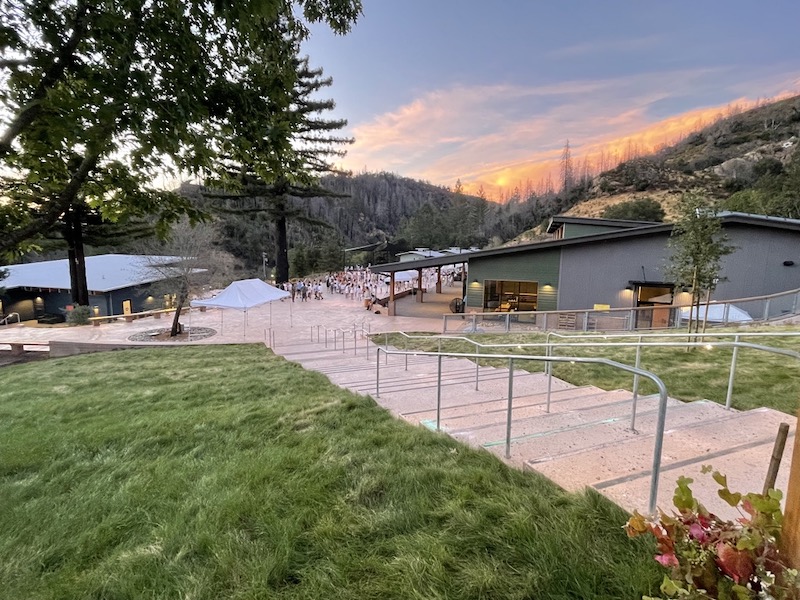 A view of URJ Camp Newman

In 2017, the Tubbs Fire, a Northern California wildfire that destroyed 36,000 acres in the state’s wine country, devastated URJ Camp Newman, the region’s premier Reform Jewish summer camp. When the fire ended, 90% of the camp’s buildings were destroyed, and the camp shut down until 2021.

But amid the loss, Camp Newman’s leadership found opportunity. The destruction allowed the camp, which is located about two hours from San Francisco, to realize a dream it had been pursuing since 2011 — to upgrade and expand the campus’ Jewish retreat center, which is active during the non-summer months.

Now, 11 years after it began planning the transformation, Camp Newman’s retreat center is open, having raised $79 million out of a total capital budget of $131 million, eJewishPhilanthropy has learned. Approximately $67 million came from private donations, including an anonymous $10 million gift, while $12 million came in the form of relief funds from the State of California.

“After you lose 81 of 90 structures, you’re literally starting from scratch,” Ari Vared, Camp Newman’s executive director, told eJP. “We took the opportunity to regrade the entire center of the campus in order to increase accessibility for anyone. That ultimately allows somebody who is more senior in their years to be really comfortable and be able to access the space and participate fully — someone who maybe has a physical disability [will] be able to use the space as an equal participant, but also someone with a stroller.”

Before the expansion, the camp’s retreat facilities could host up to 50 groups per year. When the new center is fully built, it will be able to accomodate more than 90. Camp Newman hopes to have 700 beds in the retreat center when it’s fully constructed, and aims to serve up to 20,000 people per year on its campus of nearly 500 acres. If it reaches that capacity, Camp Newman would be larger than most other major Jewish retreat centers. Isabella Freedman Jewish Retreat Center in Connecticut, for example, is on a 400-acre campus and serves 6,000 people per year.

According to Camp Newman leadership, accessibility and adaptability were major priorities of the expansion. A summer cabin built for 16 campers, for example, converts to two smaller family units — each with its own bathroom. The dining hall mezuzah is longer than standard mezuzot, enabling a large group of people — including children and people with disabilities — to touch or kiss it. The camp’s core values — Community, Acceptance, Role Modeling and Each and Every One, which create the acronym CARE — are written into the cement of the camp’s main plaza in English, Hebrew and Hebrew transliteration.

“Everything about the rebuild is intentional and reflects Jewish values, really universal values that anyone can appreciate and feel edified by living by them,” board chair Michelle Tandowsky told eJP. The goal, she said, is for guests to “feel they’re wanted, welcomed, seen and appreciated.”

Currently Camp Newman has about 15 full-time staff members; as the site expands its retreat capacity and revenue, the camp expects to hire staff to meet demand. Its kitchen is “kosher-style,” but has the ability to serve kosher food to individuals or to groups. The center has also hired a new chef.

“There’s nothing more effective for creating Jewish community [and] Jews actually going really deep, and you only can do that inside of a retreat center,” Rabbi Ryan Bauer, senior associate rabbi at San Francisco’s Congregation Emanu-El, which has more than 2,100 member households, told eJP. “I’ve asked our staff to grab as many dates as possible in the future because I think when people realize what they have made, there’s going to be a multi-year waiting list. This place is remarkable.”

In addition to its own amenities, the retreat center is collaborating with other Jewish organizations to enrich its space. A group called Wilderness Torah, for example, focuses on connecting to Judaism through traditions linked to the earth, but doesn’t have its own physical space. It has worked with Camp Newman for two years to design and implement a Center for Earth-based Judaism at the site. Vared also hopes to one day provide guests with a list of local Jewish vintners, and to host wine tastings at the center.

“They’ll home base in our land and create something really incredible with permaculture design and the like,” Vared said of Wilderness Torah. “And we will be able to offer the broader retreat facilities and the broader know-how that we have in terms of that experience. And then you can start to imagine what’s possible, then at that intersection that might not have otherwise been possible.”