Donor Sandra Kanengiser hopes the gift will enable the museum to reach  “a lot of kids who don't have a clue about what the Holocaust is.” 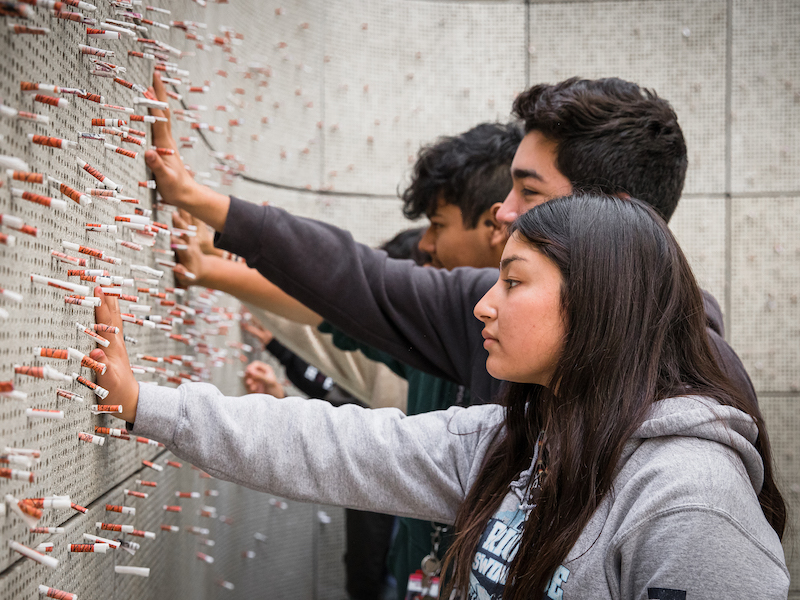 courtesy of the holocaust museum la

Every year, the Holocaust Museum LA hosts tours for 30,000 students ranging in age from fourth grade through high school, primarily from underserved communities, and expects that number to grow to 150,000 by 2030. Now, the museum has received a $1 million donation to fund those tours, eJewishPhilanthropy has learned.

The donation, which will be parceled out over five years, comes from the family foundation of Sandra Kanengiser, named for Kanengiser’s uncle Jack Nomberg, a Holocaust survivor who died at 101 in 2019, and his wife, Goldie. The gift is in memory of Kanengiser’s late parents, Robert and Barbara Gerson, who were also Holocaust survivors. Barbara Gerson also served as a docent at the museum.

Kanengiser’s children sit on the family foundation’s board and take an active role in determining its grantmaking, and her husband Lewis also is involved with the foundation. The foundation supports about a dozen additional projects, from community development in Africa to funding medical research. It also funds some additional projects relating to Holocaust remembrance, which Kanengiser said, are about impact and legacy in a time of “flagrant expressions of hatred and xenophobia, and in particular, antisemitism.”

“What we’re seeing is so extreme right now, and so terrifying, the sort of brazen expressions of antisemitism, it’s as if the genie’s been let out of the bottle,” Kanengiser told eJewishPhilanthropy. “And we don’t know how the genie gets stuffed back into the bottle, but we think that education is the catalyst for change.”

Kanengiser hopes the gift will enable the museum to reach  “a lot of kids who don’t have a clue about what the Holocaust is.”

“It’s not that they have an opinion one way or another or a bias [about the Holocaust]; they have no information,” she said, calling the effort “a local endeavor, but it’s also the core for a broader endeavor.”

According to the museum, 95% of students who participated in tours at the museum agreed that young people should learn about the Holocaust to stop something like it from happening again, and 85% said they would say or do something if they heard negative comments or jokes about any religion, race or ethnicity.

Student tours at the museum are docent-led and customized — with assistance from the students’ teachers — based on age, prior knowledge of Holocaust history, interests of the students and other factors. Every school group has the opportunity to speak with a Holocaust survivor. The museum also offers bus transportation scholarships to schools for whom that cost would be a barrier.

“The hope here is that after visiting the museum, even if they have no Jewish friends or don’t know anyone Jewish, that they’ll hear something that a rap star may say, and recognize that it’s wrong and talk about how that’s wrong,” Joe Kanengiser told eJP. “And even more so, [they may] observe other discrimination or hate that may not be antisemitic in nature at all and recognize that as being part of the continuum of violence and hate, and develop the understanding, the ability and courage to respond accordingly.”

Kanengiser called the donation “a very natural progression for my family.” She said that when her parents moved to Los Angeles in 1961, they became very active in Holocaust related organizations, were part of the speaker’s bureau for the Anti-Defamation League, and spoke regularly to their grandchildren’s classes.

“What is so great is that we’re able to make a contribution to an organization, in our community, in the community where I was raised, where my parents built their lives after the war, that is so spectacularly run,” she said. “We’re interested in not just writing checks, to make us feel good, but to really have an impact.”

Bex Kanengiser remembers her grandmother visiting her school to share her Holocaust stories, and how the story deepened with detail as she grew up.

“I think being able to access that, as we grew up, and have a deeper and deeper understanding was so integral to our understanding of the atrocities and the world now, and what continues to happen,” she said. “So I think that it’s really important moving forward — for children of all ages to be able to have these conversations.”