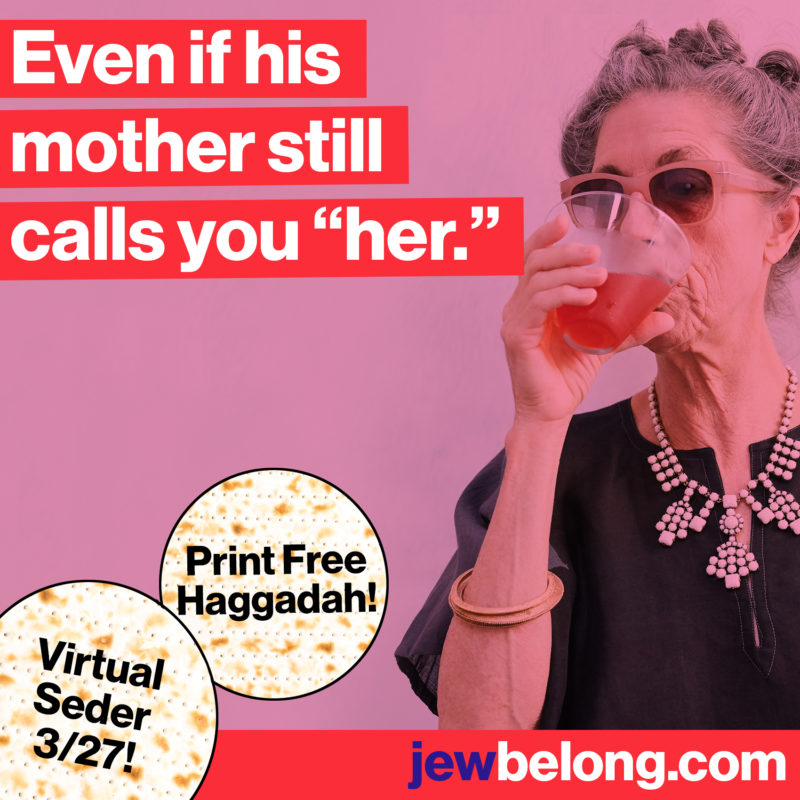 For some people, the Passover Seder is an intricate, intellectual and spiritual event that starts weeks ahead of time with the creation of a personal Haggadah and lasts until the early hours of the morning after the ritual meal.

For others, it might be about the kids. Plastic frogs are scattered across the table. Some people come in costume, and children press scallions into service as whips, imitating the Egyptians.

And then there’s a big crowd that’s doing Seder because it’s the one of the only Jewish holidays  they celebrate, and they want to feel connected, and have fun.

The Jewish outreach organization JewBelong aims to serve that last group, having just announced that it’s offering a virtual Seder called “Burning Man-ischewitz,” a riff on the popular alt music and art festival held in the American West.

“We want people to be saying, ‘How can I turn away this valuable gift?’” JewBelong co-founder Archie Gottesman told eJewishPhilanthropy. “Judaism doesn’t show itself off like that enough.” Gottesman’s husband converted, and her experience of seeing an often-lackluster Judaism through his “rookie” eyes helped inspire the creation of JewBelong.

The pandemic spurred JewBelong to act on a longstanding plan to produce more video, Gottesman said. Pre-COVID, most of its  content was text, to be read online or printed out. This year, the group will host two online Seders, described on the website as two “showings” of Burning Man-ischewitz. A suite of new videos for the holiday features a sloshed  Elijah, who’s drunk 20,000 cups of wine, and a Seder-goer who confides that he tailgates first: “There’s going to be a lot of history before you get a biscuit.”

JewBelong was founded in 2017 by Gottesman and Stacy Stuart, the brains behind the viral, politically edgy campaigns of Manhattan Mini Storage.

“It’s their knowledge of the corporate world that distinguishes JewBelong,” Bromberg said. “They’re taking that expertise and creativity and bringing that to Jewish life. That’s now how most Jewish content is created.”

The Charles and Lynn Schusterman Family Philanthropies was the first foundation to support JewBelong, said foundation co-president Lisa Eisen. Schusterman provides general operating support for the organization and its holiday campaigns. Hillel International, the Jewish campus life organization, has recently started sharing JewBelong’s content on its social media and other digital channels, said the organization’s CEO, Adam Lehman. JewBelong also receives support from the foundations affiliated with Gottesman’s family — the Gottesman DeBode Foundation and the Paula and Jerry Gottesman Foundation — as well as Crown Philanthropies, the Marcus Foundation and the Rodan Family Foundation, among others.

The target population is disaffiliated Jews, whom JewBelong calls “DJs,” such as the one-third of millennials who identified themselves in the 2013 Pew Research Center Portrait of Jewish Americans as “Jews of no religion.” Drawing those people further into the Jewish world is a goal, as well, but the organization’s focus is on trying to make Judaism irresistible in those first encounters.

“As Jewish as they want to be, and that’s enough,” Gottesman said.

JewBelong does have a track record, however, of bringing in people who want to learn more, Eisen said.

“Using social media and marketing platforms, including billboards and YouTube ads and videos, JewBelong’s mass appeal is engaging a growing swath of people who might otherwise not know about opportunities in the Jewish community, as well as providing a gateway and funnel into Jewish life for those who want to go deeper,” she said.

JewBelong’s website is an irreverent, small-scale version of My Jewish Learning. Just like the educational site, it offers information about life-cycle events and holidays. But the theme color is pink instead of blue. The image illustrating Yom Kippur is a towering pastrami-corned beef sandwich. Over the past year, the site has had 300,000 unique visitors, Gottesman said.

The 2013 Pew survey also revealed that 42% of American Jews said that having a good sense of humor was essential to their Jewish identity, said Benji Lovitt, an Israeli-American comedian and Jewish educator, who said humor’s power to have a serious impact is underrated.

“Comedy is as deep and nuanced and complicated as anything,” he said. “People don’t know that.”

JewBelong’s brand of humor isn’t for everyone, but it’s worth the risk, said Bromberg and Lehman.

“I don’t worry about JewBelong’s sometimes irreverent and edgy humor turning people off,” Lehman said. “I worry about everyone that we’re not turning on to Jewish life because we’re not finding contemporary and compelling ways to get their attention.”

Gottesman describes success as hearing from people who tell her they didn’t think Judaism had anything to offer them, until they saw JewBelong in their Facebook feed, or on a billboard. But that kind of impact can be difficult to quantify for funders, and she is continually working on how to make her case for why donors should invest in broad outreach, she said.

“Unaffiliated Jews are out there and we can’t find them buying another synagogue list, because they’re not affiliated, they’re not on it,” she said.

The reward is that once reached, that population expands the Jewish community.

“I’m not saying forget synagogues, it’s all online,” Gottesman said. “But you need to give people a menu of resources and experiences, because you don’t know what’s going to hit them.”