The U.S. Army has brought the JCC Association and Chabad together to educate soldiers 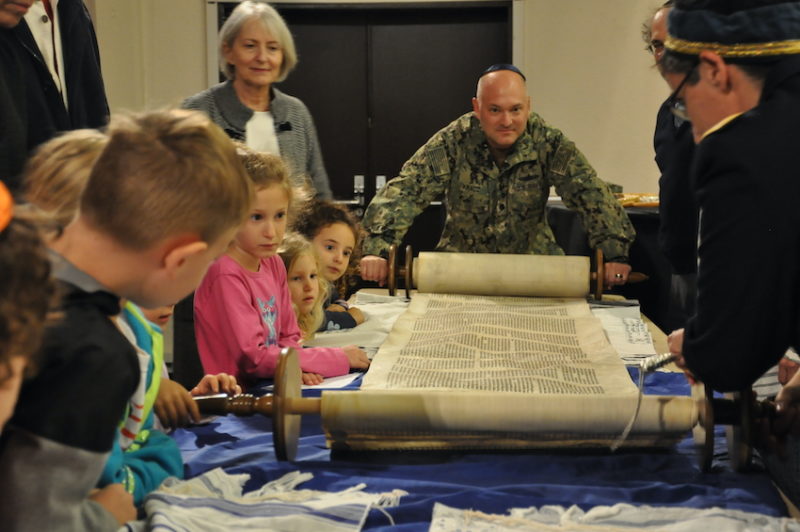 Two Jewish organizations serving military chaplains are providing religious education to U.S. Army servicemembers and their families, in keeping with the Army’s historic interest in fostering cooperation between members of a given faith. The groups — the JCC Association of North America and the Chabad-Lubavitch movement — have contracted with the Army for one year to deliver the services, Rabbi Tracy Kaplowitz of the JCC Association told eJewishPhilanthropy.

“Usually, if you walked into a chapel on a base and said you were looking for Hebrew school, you would get blank stares,” said Kaplowitz, who is the director of operations of the Jewish Welfare Board’s Jewish Chaplains Council, which operates under the auspices of the JCC Association.

“The Army has a long history of encouraging or mandating Jewish religious cooperation,” said Ronit Stahl, a professor of history at University of California, Berkeley, adding that the Army has the same attitude toward other faith groups, including those in the country’s Christian majority. “This reflects the military’s longstanding resistance to dwelling in the weeds of denominational difference.”

The JWB was founded in 1917, almost immediately after the United States declared war on Germany, to support the Jewish soldiers who would serve in World War I. The JWB took on multiple other functions early in its history, including the support of JCCs. In 1990, the JWB was renamed the JCC Association, and the chaplains service was housed within the association.

The council includes rabbis from the Reform, Conservative and Orthodox movements.

Its Chabad counterpart, the Aleph Institute, which provides several programs, including prison chaplains and prisoner advocacy, was founded in 1981. Chabad rabbis began to enter military chaplaincy in 2011, when the Army decided that it would let them keep their beards, Abraham said.

The global shift to online education necessitated by the coronavirus pandemic was the JWB’s original impetus to create an education program to serve Jews across the Army, which had already begun using the internet to provide Christian religious resources.

“The model was that each chapel didn’t have to create everything on their own,” Kaplowitz said. “We could create a system that went across bases.”

JWB decided to partner with Shalom Learning, a nonprofit provider of Jewish educational resources and teacher training for grades K-7 based in Newton, Mass., to bring its online curriculum to some of the families served by the JWB’s chaplains corps, Kaplowitz said.

That program came to the attention of a director of religious education in the Army, a civilian who works with faith communities, who thought it should be expanded, Kaplowitz said.

Meanwhile, JLI and the Aleph Institute had taken note of the Army’s ample Christian educational opportunities and wanted to also offer religious and spiritual support through learning, Abraham said.

“The Army is interested in holistic fitness — not just physical, but also mental and emotional,” said Abraham.

The Army made the match, and the JCC Association and JLI divided the opportunities according to each organization’s expertise, with JLI taking on education for adults, and the JWB handling education for children. The Lookstein Virtual Jewish Academy, which is part of Bar-Ilan University in Israel, is providing the high school curriculum that the JWB will administer.

The JWB and Aleph work closely together, Kaplowitz said. The JWB will attend Aleph’s annual training, and Aleph is attending JWB’s, which is taking place this week.

JLI will be offering three classes, Abraham said: “The Journey of the Soul: A Fresh Look at Life, Death and All the Rest;” “The Dilemma,” about the ethical quandaries posed by modern life, and “Great Debates in Jewish History.”

In its history, the Army has used both medical and spiritual approaches to provide mental health for soldiers, Stahl said.

“This is a newer iteration, the idea that religion in the armed forces will contribute to soldiers’ best selves and wholeness in various ways.”