All too often, even in subtle ways, when people ask for support out of their own marginalization, they are met with responses that reinforce that very marginalization.

On a visit to the Bay Area years ago, I was approached by a woman named Jasmine who asked if she could read my face. I was a bit taken aback, but figured, “When in Berkeley….” Jasmine then looked at me intently and said, “Most people walk around with their weaknesses on the outside. Their work is to go inside and find their strengths and bring them out. You wear your strength on the outside. Your work is to go inside, find your weakness, and bring it out.”

Not everyone who works in the changemaking business is necessarily involved in continually highlighting their own vulnerability, but for those of us whose work is rooted in the marginalization of our own bodies, asking for and receiving support with this work can be particularly challenging. Personally, I owe a debt of gratitude especially to the Black and/or disabled Jewish folks who have shared their wisdom with me on working for change within a community that continues to reveal not only its resistance to change, but also its ongoing biases against the people highlighting the need for that change. 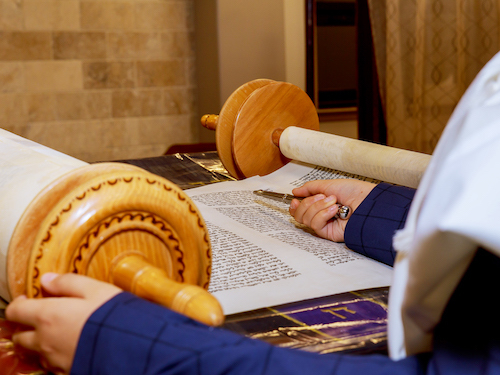 Too often, attempts to help end up recreating the very marginalization and stigmatization that we know needs to be dismantled. Too often, we are better intentioned than we are actually beneficial. Seeking diversity, we end up with tokenism, or our attempts at inclusion only highlight the “otherness” of those we seek to include.  How can we help rebuild rotten structures of belonging from the ground up?

This week’s Torah portion knows a thing or two about rotten structures. Parshat Metzora begins in the middle of a continued conversation about what to do about “tzara’at“—an affliction that is usually translated as “leprosy,” though it has nothing to do with the bacterial infection once called “leprosy” (now known as Hansen’s disease). This kind of tzara’at can affect a person’s skin as well as their clothing and even their house. The Torah lays out elaborate rituals for purifying the person, or cloth, or home impacted by tzara’at.

When tzara’at shows up on a person’s body or on their clothing, they are a passive recipient of priestly care. They are “brought to” the priest (Lev. 13:2) or their clothing is “shown to” the priest (Lev. 13:49). But when a person finds tzara’at in their home, they are responsible for coming forward themselves and saying to the priest, “Something like a plague has appeared upon my house” (Lev. 13:45). When it is a house that is persistently infected, the remedy includes demolishing all or part of the building. The healing cannot begin until the person brings forward their own affliction, their own weakness.

The Jewish interpretive tradition (midrash) seems to have two main ways of dealing with this coming forward to speak of the affliction in one’s own house. And if we are looking for instruction on how to behave philanthropically in this kind of situation, these two approaches could be thought of as “What to Do” and “What Not to Do.” Let’s look at what not to do first.

One stream of midrash sees tzara’at in a person’s home as a sure sign that the person has in some way gone astray. In this view, the tzara’at is a kind early warning system that alerts the person to their wrongdoing and prompts repentance. When tzara’at shows up in your home, you had better see what you did wrong and fix it, or else the tzara’at may then move into your clothing or onto your skin. This kind of victim-blaming approach would seem like a no-brainer to avoid. Yet all too often, even in subtle ways, when people ask for support out of their own marginalization, they are met with responses that reinforce that very marginalization. In my own experience, I’ve lost track of the number of times that someone has invited me to introduce them to the concept of body liberation only to have that person make a self-deprecating joke about their own body (inevitably thinner than mine), thereby shoring up the very denigration of fatness that our work is trying so hard to uproot.

But the midrash also offers another approach. In Vayikra Rabbah (17:6), Rabbi Hiya wonders what it could possibly mean that the text of our parsha states that God Godself inflicts the tzara’at that shows up in a house (Lev. 14:34). The word for “inflict” (“natati”) literally means “give;” how can tzara’at possibly be a gift?!? Rabbi Shimon bar Yohai has an answer: the houses’ previous occupants hid treasure in the walls. The tzara’at is like an X on a treasure map: it actually shows the priest and the homeowner where to dig.

So when someone comes forward to speak about something afflicting their home—rather than allowing ourselves to inadvertently reinforce the stigma of that affliction—let’s work together to dismantle the afflicted structure. Perhaps, buried within, we will find world-changing abundance for all to share.

Founder and president of Fat Torah, an organization dedicated to confronting weight stigma in Jewish communal life and deploying Jewish tradition in ways that liberate all bodies, Rabbi Minna Bromberg, Phd, is passionate about bringing her three decades of experience in fat activism to writing, teaching, and change-making at the nexus of Judaism and body liberation. She lives in Jerusalem with her husband and their two children.