Since the height of the pandemic, the pattern of Jewish migration has also changed somewhat. Out migration has been more from the larger and denser communities such as New York and Chicago, and the profile of movers has expanded to include younger retirees (in their 50s), and more young professionals and young families.

Throughout history, Jews have been a people on the move, from the nomadic Abraham and Sarah to Moses wandering in the desert, to the massive relocations of the modern era often spurred by antisemitic violence and poverty. This last contributed significantly to the creation of the two Jewish population mega-centers that exist today: Israel, an  intentionally created Jewish state, and the United States, where Jews constitute an accepted and respected minority.

As roughly 90% of all Jews now reside in these two centers, it can be argued that in the 21st century the Jewish people at last achieved a level of demographic stability, that the ‘wandering Jews’ now wander no more. Yet, a closer look at the demographic trends in one of these centers, the U.S., reveals that within this population concentration, Jewish inter-regional migration rates are on the increase. 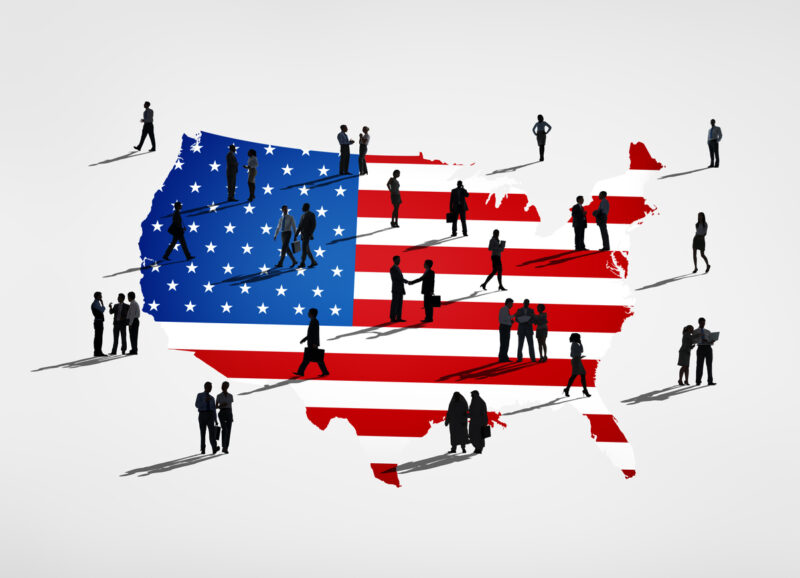 This level of geographic change poses critical challenges to Jewish continuity, particularly as preliminary research suggests that migration frequently results in reduced Jewish engagement and affiliation. National, strategic intervention, supplemented by detailed local initiatives, could help communities respond effectively to the demographic changes at play in their areas. But for such a plan to be developed and implemented, data on the extent and character of the moving populations needs to be gathered and analyzed.

GENERAL TRENDS IN MOBILITY IN THE USA

The general population of North America is fairly mobile. According to the US census, until recently, 14% of the population moved home each year, although only around 1½% moved out of state. Of those that indeed move out of state, the overall trend is a movement from the NorthEast and Midwest to the South and the West. The growth states  are Vermont, South Dakota, South Carolina, West Virginia and Florida, while those declining are New Jersey, New York, Illinois, Connecticut and California. The main reasons people move according to the American Community Survey are career changes, the need for better housing, family circumstances and the cost of living.

When Americans move, they not only take their household possessions, but also their incomes and their savings. Hence the IRS has considerable data on relocation. For example, the states that gained the most income and assets in recent years were in the South, notably Florida and Texas, while the states that lost the most income and assets were all located in the Northeast.

The COVID-19 pandemic accelerated some of these trends and altered others. According to the Pew Research Center, in 2020 alone, 8% of the U.S. population moved, attributing the move to the pandemic, although mainly staying within their home state.

Over the years, a pursuit for more affordable housing has been a typical causal factor of America’s high mobility rates. The pandemic increased threefold the rate by which families moved from large, expensive metro areas to smaller, more affordable destinations.

Aided by digital technology, the pandemic altered the nature  of domestic migration. Firstly, in 2021, the Current Population Survey ASEC, a joint effort between the Bureau of Labor Statistics and the Census Bureau, reported that the number of housing-related reasons surpassed employment-related for the first time since 2005. With more employers offering remote work and the number of job openings at its highest since 2001, motivations for migration have shifted to factors affecting housing and lifestyle, such as a desire to live near open spaces with a temperate outdoor climate. Additionally, some jobs are moving to where the talent has transferred to, as in South Florida with the phenomenon of “Wall Street South.” A second change is the increased need to be closer to family. And the third important change is in the demographic profile of movers as older people are retiring earlier or partially retiring.

As a result, between March 2020 and February 2022, the top ten metro areas gaining the most out-of-metro homebuyers consisted of more affordable interior markets and Southern beach destinations. Such that the biggest and older cities like New York, Los Angeles and Chicago are shrinking the most, while  the cities with the highest growth are those that have ballooned only more recently such as Phoenix, Las Vegas, Austin, Portland and Jacksonville.

THE IMPLICATIONS FOR JEWISH MOBILITY IN NORTH AMERICA

The majority of Jewish movers are leaving the NorthEast for the South, SouthWest and West, to areas such as Austin, Florida, Phoenix, Portland, Seattle etc. They are mostly either young professionals or retirees who are moving into mid-size cities and cluster areas such as South Florida. Their reasons for moving were similar to those of the general population, namely work, family, housing and lifestyle and cost of living.

Since the height of the pandemic, the pattern of Jewish migration has also changed somewhat. Out migration has been more from the larger and denser communities such as New York and Chicago, and the profile of movers has expanded to include younger retirees (in their 50s), and more young professionals and young families. Additionally, many “snowbird” families in Florida and Arizona have chosen to become year-round residents. The reasons for these changes arise from the ability to work remotely coupled with the strengthened desire for a more outdoors lifestyle.

This  magnitude of Jewish movers raises the second important concern. Families that move are less connected and less engaged with the organized Jewish community, according to the 2009 JFNA study. Newcomers are less likely to send their children to Jewish day schools, less likely to attend or become synagogue members, less likely to participate in JCCs, less likely to donate to federation and so on. In fact, in the process of moving there is a switch from greater engagement and affiliation in former communities to lesser engagement and lower rates of affiliation in the arrival communities. To state it bluntly, this means that in the process of moving, the organized Jewish community in North America is losing tens  of thousands of active participants every year. This may help explain the lower rates of affiliation in many growth communities such as Austin, Phoenix, Las Vegas and Portland as compared to the more traditional communities such as Chicago, Cleveland and Baltimore.

So far, little hard data exists on the reasons behind these losses in affiliation, but there are  possible explanations for each of the two main demographic groups – older movers and young professional movers. Older movers and retirees probably were more engaged in their former communities and either still retain those connections, and/or with children grown up, there is less of a need for active engagement.

Young professionals and young families in general do not have a propensity to join organizations and become members. Rather they tend to be more selective and engage in particular activities as needed. Additionally, for many younger Jews, “doing Jewish” is less important than for their parents.

The wave of Jewish newcomers in growth communities presents a significant opportunity. During the initial period of acculturation, newcomers are the most open to receiving help. During the acculturation and acclimatization process immediately after arriving in a new community, newcomers are in a liminal phase of adjustment. Socially, they can be somewhat bewildered, vulnerable and even needy until they reach a point when they can navigate their new environment on their own. Initially, they need to understand the lay of the new land, connect with new schools, find new friends, doctors, hair stylists, sports facilities, cultural activities and so on and they desire to grow local roots.

Therefore, it is at this critical moment that Jewish communal organizations, especially federations, JCCs and synagogues, should be reaching out to new arrivals and providing them with information, guidance, introductions and support. Many communities have such newcomers’ welcome, concierge or Shalom programs (including the comprehensive newcomers’ program that the author initiated in New Orleans and elsewhere).  Such outreach programs do not require vast resources and can be most effective at generating engagement during the transition period. These connections can endure over time and help reverse the trend of disengagement. The benefits of such programs if designed correctly and in a strategic and comprehensive manner can not only reverse the trend but actually lead to increases in active participants, community leaders and donors.

Sadly, the large but now slowly declining communities may not be aware of the gradual outflow of community members. Out-movers tend to be less visible and less vocal than in-movers. Leaders and professionals of such traditional communities in the NorthEast may not be looking at this process. But over time, one can expect to see Jewish institutions (such as day schools), losing critical mass, some stagnant or declining synagogues, aging populations, a decline in fundraising and a lack of next generation donors.

These phenomena can be dealt with if local communal leaders take stock, consolidate and recalibrate. COVID already highlighted the issue of too much Jewish communal real estate as some activities are staying virtual; such that the decline in numbers of the community will act to exacerbate this problem. Specifically, traditional communities should:

INTERVENTION AT THE CONTINENTAL LEVEL

At the continental level, there is a need for both research and active intervention. With 140-175,000 or so Jews moving to a new city each year, significant numbers will be decreasing their engagement with the mainstream Jewish community. In essence, over time we may be moving from a somewhat more affiliated American Jewish community to a less and less affiliated one. While it may be hard to buck this trend, some actions are called for to mitigate the impacts, such as:

The great migration of Jews across America is taking place at a faster pace than most people realize. Its cumulative impacts are significant and may well ultimately change the face of the Jewish community in America. It’s not too late to intervene. We need more facts and figures about who is moving, from where to where, and why. And we need concerted action both locally and nationally.

Michael Weil is a British born strategic planning consultant based in Jerusalem and Phoenix, Arizona. Until recently he was the executive director of the Jewish Federation of Greater New Orleans and led the rebuilding process of the community post Hurricane Katrina. Previously, he was a fellow at the Jewish People Policy Institute and held senior positions at World ORT and at the Israel prime minister’s office.