Adams’ enthusiasm for professional cycling and his philanthropic work is contagious. He’s built something special in Team Israel-Premier Tech, especially for someone who loves cycling and who is Jewish.

Warlaing à Brillon, France — Sylvan Adams, the owner of Team Israel-Premier Tech and an accomplished road cyclist, is gearing up for a bike ride on a sunny Wednesday afternoon in this small town in northern France just as Stage 5 of the 2022 Tour de France, one of the largest sporting events in the world, starts 120 kilometers away in Lille.

A few hours later, the Tour’s 176 riders will careen onto 11 brutal sections of rough and bumpy cobblestone roads (called “pave” in French), ranging from several hundred meters to a few kilometers in length. Every few years, race organizers include a stage with cobblestone roads to make the race more exciting and challenging. 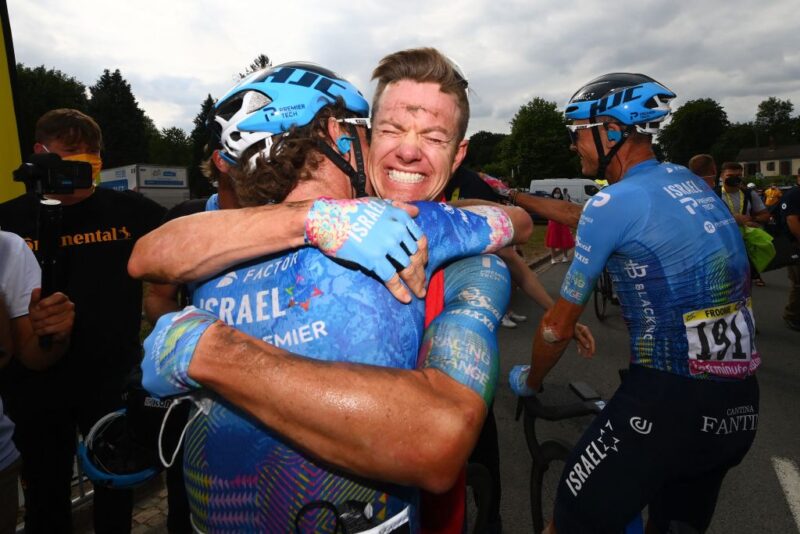 First, he wants to raise $317,000 from cycling fans around the world to build a bicycling park in the Bugesera district of Rwanda and is using the opportunity of the three-week long race to draw attention to this project. Adams will match the contributions dollar for dollar, Euro for Euro to build what he’s calling a “Field of Dreams”—16 acres of land to provide access to 120,000 kids between six and 18 to learn how to ride and potentially, race, bikes.

Second, he wants his team to win its first ever stage at the Tour de France (the team has won stages at the Giro d’Italia and the La Vuelta). And, just a few hours after his recreational ride on the cobblestone roads, Team Israel-Premier Tech’s Simon Clarke, a 35-year-old Australian journeyman in his seventh Tour de France, would throw his bike across the finish line to dramatically edge out one of the sport’s strongest riders to win Stage 5.

Third, Adams said he sees himself as a “self-appointed ambassador for Israel,” and, as such, wants to burnish Israel’s image — frequently only viewed within the context of regional conflicts — as a place to live, work and travel. He’s capitalizing on the Tour de France to do just that given its massive audience.

Adams’ enthusiasm for professional cycling and his philanthropic work is contagious. He’s built something special in Team Israel-Premier Tech, especially for someone who loves cycling and who is Jewish.

There’s a deep pride in seeing a Star of David on the jersey of a professional cycling team and watching Guy Niv, 28, the Tour’s first Israeli–and perhaps its first Jewish man–ride in the Tour.

Plus, the team that Adams has built is fun to watch because some of its riders are capable of winning additional stages in this year’s Tour de France. They include Chris Froome, 37, a four-time winner of the Tour de France; Michael Woods, a Canadian rider who is the only man in the peloton to have run a sub-four minute mile; and Jacob Fuglsang, a Danish rider who has won some big races in his career.

What’s more, Adams’ philanthropy is transparent and tangible. Adams said that he wants to make the initial capital investment to build the park in Rwanda and that the management and maintenance would be relatively inexpensive. Rwandans would manage and run the bike park and, in the future, Adams would seek to make larger investments to build infrastructure that is currently lacking.

“I’m often asked, why are you doing this [building in Rwanda]? We have an ancient Jewish cultural imperative…Tikkun Olam. It is part of our nature to reach out and try to do some good in the world,” Adams, the son of a Romanian-born Holocaust survivor, said at the team’s Grand Depart press conference in Copenhagen on June 30. “Let’s do something good together.”

His goal of promoting both professional cycling by engaging fans and asking them to do more than just cheer is a worthy goal. He wants to promote the sport and, at the same time, give fans a stake in its future. Given professional cycling’s drug-related scandals, the sport’s image could benefit from a broader fan base.

Adams believes that he can rally a “silent majority” of sports fans who are apolitical and not interested in politics, and persuade them to see Israel – and Judaism as well – as a force for good in the world. In doing so, Adams has the potential to reach people that many politicians cannot because his message and his goal in Rwanda is not political or disagreeable.

Indeed, seeking to change lives, one bike a time, is an admirable and worthwhile effort.

Jonathan E. Kaplan has written about professional cycling and is currently a communications officer at the Open Society Foundations. The views expressed here are his own.