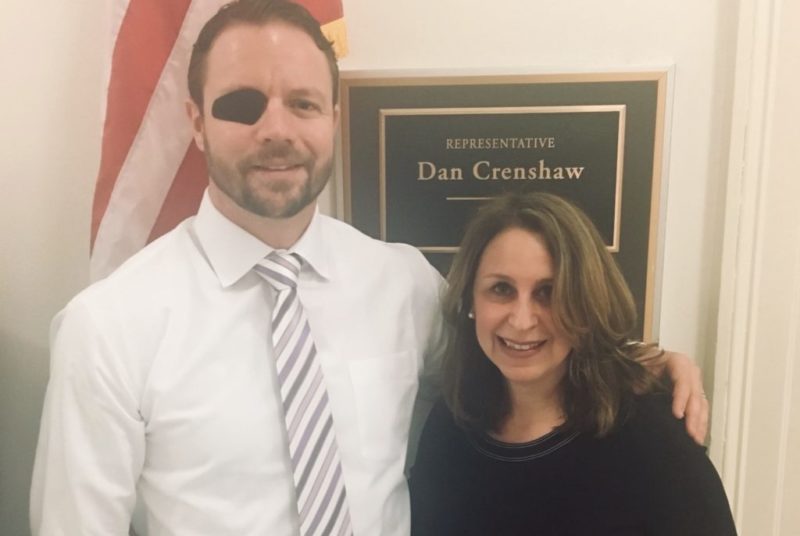 A third of Americans have needed fertility treatment or know someone who has. Yet when Karen Paikin Barall, the chief lobbyist for Hadassah: The Women’s Zionist Organization of America, started discussing infertility with lawmakers and staffers on Capitol Hill, the most common reaction was a question: “Why don’t they just adopt?”

Paikin Barall found that response to be both insensitive and enlightening. It helped shape the strategy for Hadassah’s campaign to make infertility treatment more affordable, and to raise awareness of the issue’s complexity and pervasiveness.

Education had to come before lobbying. Before working on legislation, lawmakers would have to understand the issue in a different way — as a medical problem that requires costly treatment, but is almost never covered by insurance.

On April 20, that strategy produced a congressional resolution co-sponsored by Reps. Dan Crenshaw (R-TX) and Debbie Wasserman Schulz (D-FL) that recognizes infertility as something that affects diverse groups, although some groups have less access to treatment, because it is so expensive. The resolution isn’t legislation that would actually create policy, it’s a way for Hadassah to try to redefine infertility and begin to suggest ways to make treatment more accessible.

“We have relationships with both sides of the aisle because of our pro-Israel agenda and our work on antisemitism,” Paikin Barall said of Hadassah’s lobbying efforts in Washington.

Nobody has yet signed the resolution, but the goal is to secure signatories in both the House of Representatives and the Senate before the end of the 117th Congress. Hadassah will be working with RESOLVE, an infertility advocacy nonprofit, to generate support for it, and will participate in RESOLVE’s annual advocacy day, scheduled for June 17.

The resolution comes two months after 13 Jewish fertility organizations gathered for the first time for an online summit that drew 2,000 people.

Hadassah first took up the cause of infertility because it was a topic of concern to its membership and a good fit with the organization’s historical mission of supporting the Hadassah Medical Organization, which runs two hospitals in Jerusalem and established an expertise in the field of fertility in the 1960s.

One in six Jewish couples face infertility, which is a higher percentage than the one-in-eight rate among the general population, said Elana Frank, CEO of the Atlanta-based Jewish Fertility Foundation, a participant in the summit, which provides grants to help pay for treatment and other services. In July 2019, Hadassah adopted a policy stating the importance of infertility as a concern of its members. In 2020, it launched its reConceiving Infertility initiative, which raises awareness.

When Paikin Barall started her work as Hadassah’s lobbyist in 2018, she sensed an opportunity for advocacy in addition to member engagement.

“There was no Jewish organization in Washington working on this,” she said. “It was a place where we could really do something.”

To make sure she wasn’t stepping on anyone’s toes, Paikin Barall asked Jewish fertility organizations such as the one Frank runs how they would feel about Hadassah doing advocacy work on it, and learned that none of them felt it was part of their mission. That group was focused on providing financial and emotional support to families.

From there, Paikin Barall started mentioning infertility. as she made her rounds on Capitol Hill, and struck an unexpected chord in Crenshaw’s office. She learned from the Texas representative and his staff that infertility is a significant problem in the military, due in part to the decline in men’s testosterone levels upon returning from combat. (Crenshaw is a former Navy SEAL who served in Afghanistan.) Next, she sought advice from RESOLVE, which gave rise to the idea of the congressional resolution as a starting point. Hadassah drafted the resolution, and solicited input from RESOLVE and other Jewish fertility organizations.

“Hadassah was really thoughtful about the content of the resolution,” said Barbara Collura, CEO of RESOLVE. “It’s inclusive and all-encompassing, but it’s an easy ask, to sign it. And then it puts a stake in the ground and says, ‘This is where we need to be going, people.’”

Hadassah’s lobbying on infertility with Crenshaw’s backing will draw new attention to infertility as a problem for military families, Paikin Barall said.

“Whenever you are changing the conversation about an issue, it helps,” she said.

In 2018, Sen. Cory Booker (D-NJ) and Rep. Rosa DeLauro (D-CT) introduced the Access to Infertility Treatment and Care Act. Collura said it likely won’t ever pass, even if it is reintroduced, but its existence will help generate enthusiasm for different pieces of the proposal. The Hadassah resolution will help advocates speak persuasively about various aspects of the agenda, she said.

Hadassah itself isn’t thinking about legislation now, but when it does, the substance of any future bill will be informed by conversations with lawmakers.

“We have to be patient,” Paikin Barrall said.