Ed.Note: The following article is offered as a partnership between eJP and the Clergy Leadership Incubator program (CLI). CLI is a two-year program to support and encourage congregational rabbis and rabbinic entrepreneurs in the areas of innovative thinking, change management and institutional transformation. CLI is directed by Rabbi Sid Schwarz and is fiscally sponsored by Hazon. Applications for the next cohort of CLI are open through Jan. 31, 2023. More information about the Rabbinic Fellowship program, including FAQs and a request for an application, can be found here.

Recently, my 3-year-old began the splendid quest to understand the world around him, with the word “why” now the most commonly spoken word and question in our house. 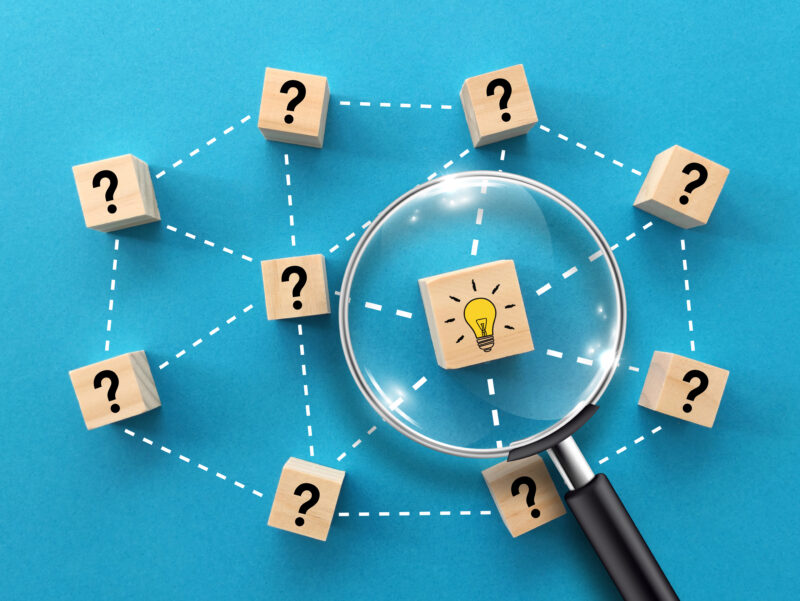 I will admit, it can be exhausting, the seemingly endless echo of this one-word question. There are times when I feel like I’ve run out of answers, that I don’t know enough and that I don’t have the energy to dig into the questions with him. But ultimately, I continue to find myself in awe and inspired at Netta’s shameless and persistent curiosity; at his humble admission that he does not know and at his yearning to be filled with new knowing.

In one of the infamous dreams in Torah, Jacob sees a stairway extending from the ground to the sky, with angels of G!d going up and down the ladder. The dream includes a promising dialogue with G!d, and when Jacob wakes up, he exclaims: achen yeish hashem ba’makom hazeh v’anochi lo yadati — “Surely, there is G!d in this place, and I did not know it” (Genesis 28:16).

Perhaps just as profound as the presence of G!d in Jacob’s dream and in the place where he rested were the words of humility that he spoke: lo yadati, “I did not know.” As Aviva Zornberg writes in her 2011 book The Murmuring Deep: Reflections on the Biblical Unconscious, “the revelation is the not-knowing.”

When Netta asks me why something is the way it is, he helps me pause and ask the very same question: Why is something one way and not another? Sometimes, the question is relatively simple: Why can’t we stand on the dining room chair? Because we don’t want to fall and get hurt. Other times, the questions are much harder: Why are people fighting? Why are people leaving their homes and traveling somewhere else? When he asks me this kind of question, I really have to slow down. Why is the world aching as it is? What is all the fighting about, at its core? When Netta asks “why,” he is asking a fundamentally Jewish question: What else could this be?

Over the past few years, I have become immersed in practicing and facilitating the Jewish Studio process, a pedagogy and model of creative learning that brings Torah and art into a shared beit midrash and studio, seeking to expand Torah beyond the written text and conversation around it and seeking to infuse art-making with sacred insight. One of the core texts and values of the Jewish Studio process comes from Pirkei Avot: Ben Bag Bag omer, hafoch bah v’hafoch bah, d’chola vah — “Ben Bag Bag said: Turn it over, and [again] turn it over, for all is within it” (Pirkei Avot 5:22).

Rabbi Adina Allen, co-founder and creative director of the Jewish Studio Project, writes, “Just as Torah is complex and multilayered, each one of us contains multitudes. How might our life, our work, our identity, our relationships, our art change as we continuously ask the question embedded in the phrase ‘hafoch bah’ — ‘What else could this be?’”

To turn something over, to examine it from a new angle, to question it, to challenge ourselves to be in different relationship with it – this is not only a rabbinic value, it is also a contemporary Reconstructionist approach to Torah, in which I was trained at the Reconstructionist Rabbinical College.

I learned to ask this kind of question when I was just a teenager at the Reconstructionist movement’s summer camp. I began going to Camp Havaya, then Camp JRF, in 2005. As a camper, later as a counselor and eventually as a member of the senior staff, I was most amazed by the way our community not only normalized but celebrated questioning Torah, spirituality, tradition, culture and ritual. At camp, I learned that Torah’s words may be fixed, but the etching of ideas into sacred form is still underway through our own insights, as we change with Torah in our arms.

Camp was the first place where I learned what a democratized teacher-student relationship could look and feel like; for many years it was the only place where I felt genuinely able to be both reverent and skeptical of the tradition that I held so dear. And it was the place where I first had the chance to integrate Torah and art, a practice that has now moved into the center of my rabbinate and personal spiritual practice.

For as long as we know, human beings have been making art to portray, to use, to teach. When words are not enough, when we don’t know how to write, when all we have is a rock and a chisel, when we are frightened and need something to occupy our voices and our bodies, paintings, sculpture, song, and dance burst forth.

In the middle of the Israelites’ departure from Egypt, having just crossed through a sea split with walls of water on both sides of the path, they burst into song — oh, the relief of singing out and moving when adrenaline and the vast unknown are pulsing through the veins! When they wandered in the desert and built a portable dwelling place for the Holy One, an artist was appointed to help make the space beautiful, and columns of Torah text are devoted to those details. Still, in the shadow of the Spanish Inquisition, Sefardi Jews wrote poems that reflected their determination to survive and the lasting memory of exile. Amid the pogroms, Yiddish songs that told of woes and that prayed for relief became nightly lullabies. After the Holocaust, buried poems and sketches were found among the ashes. So yes, we are a people of the book, but we are also a people of skilled trade, a people of the hand.

The page, the dance floor, the recording studio, the canvas of creating — they are a mirror of potential and a window into all that is yet to be.

The page is filled with words strung together like pearls,
the dance floor is warmed by our stomping feet,
the little room echoes with the harmonies we found
atop the melodies we carried in,
the blank page is transformed into a tapestry of color,
the parchment is coated with ink,
the wood is sanded into calm
and hammered into a hug of rightness in space,
the song holds hands with our tears
and our beating hearts
as we march down the street demanding justice.
Something that wasn’t here before emerges,
something we couldn’t have imagined at the start.

We need art and music and movement because they push us to ask why, to transform a blank canvas — be it an actual canvas board, a piece of paper, a ball of clay, an uncut quill, a pile of broken plates, an empty dance floor or a patiently waiting instrument. Creative work reminds us that what is, is not what has to be; we can so often recast the raw and chaotic into something imperfectly beautiful and whole.

In Judaism as a Civilization, Rabbi Mordecai Kaplan, the founder of Reconstructionist Judaism, writes, “A civilization cannot endure on a high plane without the preservation and cultivation of its arts. The art creations become part of the social heritage which is the driving force of the civilization.” Later in the book, he suggests, “In organizing public worship, the aim should be to utilize as much as possible of poetry, music, song, drama and the dance.”

At our core, as Jews, we are a creative people, and we need our creativity to sustain the life of our culture, tradition and unfolding stories. In the face of brokenness, which we have become all too familiar witnessing and experiencing, art and creative projects help us open up that most powerful question: Why? Transforming raw materials or broken pieces or pure potential into a different form or something new helps us sit with the mystery of this world and use our bodies to explore what else this world could be.

…pulse through my hands and my body as we make this world ever more beautiful, ever more whole.

Rabbi Bec Richman is an artist, rabbi, soferet (Torah scribe), Hebrew calligrapher and potter based in Cleveland Heights, Ohio, where she is building a Jewish community art beit midrash and collaborative studio space. She is on the faculty of the Jewish Studio Project and facilitates the Jewish Studio Process for communities across the country. Her artwork can be found at kotevetstudios.com.