$9 million effort with Sagol family launches at Tel Aviv U. amid wave of terror. 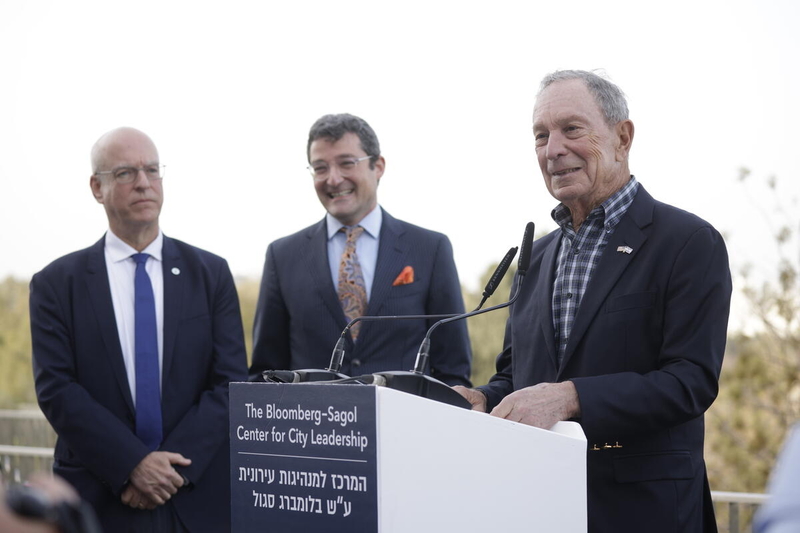 Mike Bloomberg attends the announcement of the Bloomberg-Sagol Center for City Leadership at Tel Aviv University on Sunday.

In Israel, becoming mayor of a major city has served as a stepping-stone to national office: Jerusalem Mayor Ehud Olmert became prime minister three years after leaving the post, and Nir Barkat, who ran Israel’s capital until 2018, is seen as a possible successor to Benjamin Netanyahu as leader of the Likud party.

On Sunday, former New York City Mayor Michael Bloomberg visited Israel to launch a new $9 million initiative, modeled on a program at Harvard University, that will reach beyond Israel’s largest cities to give mayors the skills to be effective managers of city halls across the country. The Bloomberg-Sagol Center for City Leadership at Tel Aviv University, inaugurated on Sunday evening in Israel, will provide leadership and management training beginning later this year to 20 mayors from across the country, with a focus on using data in governance, engaging the public, crisis management and negotiation.

“Most mayors, when they come into office, haven’t had experience in executive capacities, running large organizations with lots of employees, so they have to learn all of this stuff on the job,” Jim Anderson, government innovation lead for Bloomberg Philanthropies, told eJP. “In the private sector, if you’re a CEO, the first thing your board of directors does is give you a leadership coach… But for a mayor, there’s nothing.”

The initiative is funded by Bloomberg Philanthropies and the Sagol family, one of Israel’s wealthiest industrialist families. It comes amid a wave of terror attacks that have killed 11 people and have occured in or near Israeli urban centers, from Tel Aviv to Beersheva. And it is launching less than a year after violent clashes rocked mixed Arab-Jewish Israeli cities during last May’s conflict between Israel and Hamas in Gaza.

“The series of recent terrorist attacks in Israel underscores the urgency of this new initiative, which is aimed at helping mayors confront their most difficult challenges and most pressing crises,” Bloomberg, 80, who served three terms as New York City’s mayor until 2013, said in a statement. “Mayors are on the front lines of every crisis, whether it’s terrorism or a pandemic.”

The new center, which has been in development since 2018, is the Israeli version of the Bloomberg Harvard City Leadership Initiative, which provides similar training to American mayors at Harvard University. That program has trained nearly 200 mayors and has led to the creation of a group chat between seven Black mayors, as well as a program to combat street homelessness in Oakland, Calif., which was a priority in that city’s proposed budget last year.

It also builds on years of efforts by Bloomberg to improve governance in Israeli cities. In 2015, the former mayor and media mogul funded teams in Tel Aviv and Jerusalem — and later Beersheva — to work on innovation in city government. They led to programs aimed at lowering the cost of childcare in Tel Aviv and assisting small businesses in the other two cities. In 2019, that effort grew to become Hazira, which funds innovation in cities across the country. Bloomberg also funds similar efforts globally.

The center will be based at Tel Aviv University’s Coller School of Management, and its launch took place Sunday evening on the school’s campus, followed by a poolside dinner at the home of Yossi Sagol, who represents the family publicly. The dinner included a who’s-who of politics and business in Israel. Among the attendees were U.S. Ambassador to Israel Tom Nides, Interior Minister Ayelet Shaked, Justice Minister Gideon Saar, Environmental Minister Tamar Zandberg, Tel Aviv Mayor Huldai, Modiin Mayor Haim Bibas, Netanya Mayor Miriam Fierberg-Ikar and Bat Yam Mayor Tzvika Brot, in addition to Mayor Libby Schaaf of Oakland,  who is Jewish. The chairs of Bank Discount and Bank Leumi were also in attendance.

“I encountered the Bloomberg Harvard City Leadership Initiative and realized that Israel was the perfect fit for such a program, particularly in view of its size, the relatively small number of mayors, and the ability to make a significant impact,” Yossi Sagol told eJP.

The center also hopes to engage mayors across Israel’s demographic minorities and to include cities in the periphery, far from the Tel Aviv-Jerusalem corridor, whose residents often have lower incomes. It will also be open to the mayors of large Israeli West Bank settlements. Anderson said placing Arab, Haredi, religious Zionist and secular Jewish mayors in the same room is one of the program’s goals.

“Every community is different, but many of the challenges are similar,” he said. “At the end of the day, all the challenges of our society roll downhill to our streets and become issues that mayors must address. Mayors not only have to clean the streets and deliver services. They also have to be the face of government, and the moral voice of government, in these moments when social cohesion breaks down.”