As of early May, the JW3 volunteers have delivered over 250,000 meals — a mix of ready-to-eat dishes and food parcels with staples — to households struggling with food poverty in North London since the beginning of the pandemic. 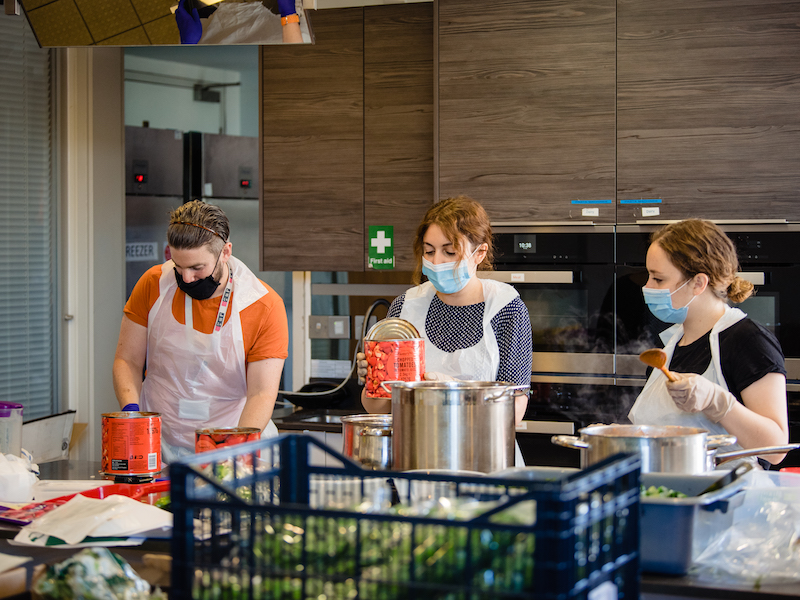 Volunteers at JW3 in London prepare food in 2020.

On a regular weekday, volunteers stream in and out of a sleek rectangular building in northwest London, toting supplies and food, sorting and packing groceries, cooking, packaging and delivering meals to locals struggling with food insecurity or mental health issues. The building also regularly hosts blood donation drives and pop-up COVID-19 vaccination clinics.

The building in question is not a government agency, nor was it founded as a food bank. It’s JW3, London’s Jewish community center, which expanded its social service programs during the darkest days of the global pandemic, and maintained them even after restrictions eased.

JW3 also does the work of a regular JCC — hosting everything from language classes to art workshops and film screenings, and social service has always been one of its core values. But when the pandemic hit and the building shut down in mid-March 2020, the JW3 leadership made significant programmatic changes and reflected on how to “serve our beneficiaries at a time when people needed to feel connected to and supported by their community,” said longtime CEO Raymond Simonson.

As of early May, the JW3 volunteers have delivered over 250,000 meals — a mix of ready-to-eat dishes and food parcels with staples — to households struggling with food poverty in North London since the beginning of the pandemic. Some of the volunteers are using their professional skill sets, while others are contributing something different or exploring a new interest or skill. And many, Simonson added, felt a sense of camaraderie while working “in the trenches together.”

“Volunteering isn’t purely an altruistic act of giving of oneself completely selflessly,” Simonson told eJewishPhilanthropy. “When we bring in volunteers, we are not asking them a favor. We are giving them a meaningful opportunity to make a valuable contribution. We are enabling them to use their talents, or their interest, or their time in a way that they feel rewarded by doing something good.”

The emergency food services, which became known as the JW3 Food Bank, were a key part of JW3’s pandemic strategy. Like JCCs and other Jewish organizations did worldwide, JW3 shifted its focus to virtual programming, which expanded its geographical reach. It established JW3-TV, which delivered online content “to lift the spirits, nourish the soul and expand the minds of thousands of people each week,” in Simonson’s words; and created Jewish Online, which aggregated programming from a diverse range of Jewish community organizations. The third strategic pillar, prioritizing social action, activated the London Jewish community — and local partners including local churches, hunger organizations, and the Arsenal Football Club Foundation, which is headquartered in Islington, only a few miles away — as volunteers to work at the food bank and serve other needs as they emerge.

When the pandemic began, caring for older adults became one of JW3’s primary goals, Simonson said, including a commitment by staff and volunteers to make weekly calls to more than 100 lonely or vulnerable people. Adult education classes and courses continued online, providing  “a lifeline for otherwise fairly isolated people, cut off from the main forms of stimulation and connection on which they rely,” Simonson said.

Over the course of the pandemic, an average of 500 to 550 participants paid for adult education and language courses weekly. JW3 reduced ticket prices for non-language classes and “began rolling out a marketing drive in order to increase our reach further, including to those living further away from JW3 who would not have ordinarily come to our center,” Simonson told eJP.

Now that the building has reopened, about 60 volunteers still come on a regular basis, ranging in age from their 20s to their 70s, plus an additional 80 to 100 teenagers who come in weekly with Project ImpACT, a teen volunteer and social action program, to cook meals or do other volunteering work.

Simonson—who regularly sports a pin reading “two Jews, three opinions, one JW3”—has been working at JW3, whose name is a play on the area’s postal code, for a decade, aiming to meet the needs of London’s diverse Jewish community through cultural experiences, challenging conversations, and social and community action. Previously, he was executive director of Limmud, the annual festival of Jewish learning that began in the U.K. and has inspired spin-off local festivals in cities worldwide.

The center was inspired by a visit Dame Vivien Duffield, a British Jewish philanthropist, paid to the Marlene Meyerson JCC on Manhattan’s Upper West Side. Her Clore Duffield Foundation provided a core capital grant to create the JW3, and Duffield serves the organization as founder and life president.

Before the current building opened in October 2013, the organization ran for seven years as a “JCC without walls,” running events in venues around London.Now, JW3 has a budget of roughly $6 million and a staff of approximately 50. Before the pandemic, JW3 had between 200,000 and 250,000 visitors annually, among them a religiously and ethnically diverse spectrum of Jews. Simonson added that JW3 works in partnership with “probably more Jewish and non-Jewish organizations than any other British Jewish organization, spanning the broad spectrum of Jewish life in the U.K.”

On its half-acre of land in northwest London, the center includes a 270-seat auditorium, a 60-seat theater, a cafe, a demonstration kitchen, dance studios, classrooms and a nursery. The site also contains apartments and offices, and its outdoor piazza is transformed for seasonally-appropriate family frolic: in winter, it becomes a skating rink, and in summer, a sandy beach. On any given week, the site hosts events for Jewish Londoners of all ages and backgrounds: Israeli film screenings, Jewish arts workshops, Hebrew classes, children’s dance classes, panels and featured speakers on everything from media culture to politics.

And through it all, the volunteering has gone on.

“It’s a two-way act of give and get – like the Hebrew word for ‘gave,’ —it’s a palindrome, right? It goes both ways, back and forth,” he told eJP, referring to the Hebrew word natan. “I give of my time and my skills and my abilities, and I get back a feeling that I have done something worthwhile that makes a difference to someone’s life, or to community, or to society. I give, and I get back a warm feeling.”