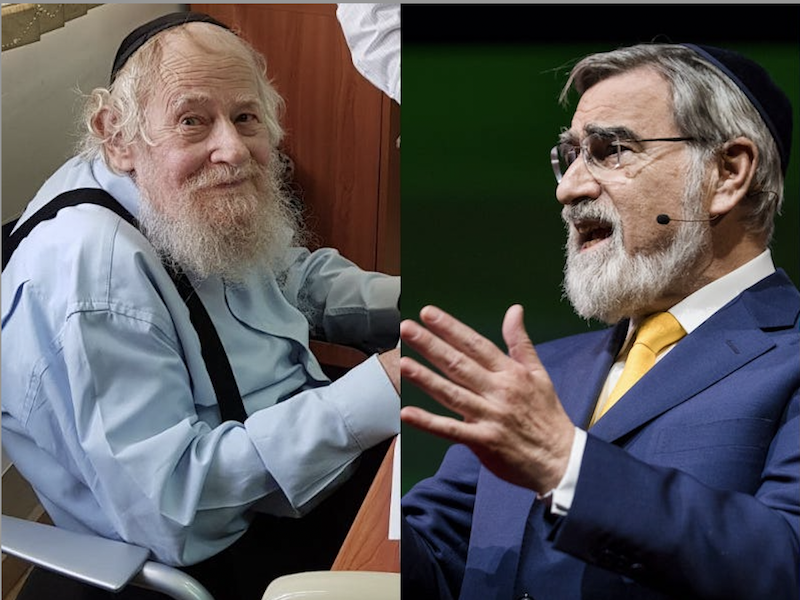 Yesterday, two independent “global days” of Jewish learning mobilized more than 100 partner organizations each to honor the work and memory of two modern Jewish scholars: the late, prolific Rabbi Adin Even-Israel Steinsaltz, who translated the Babylonian Talmud into modern Hebrew with a commentary, and the late Rabbi Lord Jonathan Sacks, who served as chief rabbi of the United Kingdom from 1991 to 2013 and whose writing made a case for the relevance of Jewish tradition in modern times. Both men died in 2020.

Limmud North America, an offshoot of the global Jewish learning organization that started in the United Kingdom, held its virtual Global Day of Jewish Learning on Sunday; the event was founded by Steinsaltz in 2010, and was incorporated into the global Limmud organization a decade later.

Sunday night also marked the start of the Rabbi Sacks Global Day of Learning in Schools. That event, also called “Communities in Conversation,” runs through Monday and marks the second anniversary of Rabbi Sacks’ death by sharing his teachings in schools and communities globally.

Rabbi David Singer, executive director of Limmud North America, told eJewishPhilanthropy that Limmud’s learning event brought together 117 institutions worldwide to host affiliated programs. In total, the day saw an estimated 10,000 participants studying “various iterations of our shared texts and study guide around the central theme” of rebuilding as a Jewish community, as a society and as a family after trauma, Singer said, adding that independent participants could also “study on their own or convene small circles of learning at their own pace.”

The Covenant Foundation was the primary supporter of the Limmud event, and the scholars who crafted the lesson plans in the study guide are all Covenant Foundation grantees or awardees. Hanan Harchol, the creator, writer and animator of Jewish Food For Thought, a free online animated series that teaches Jewish ethics, composed a unit on rebuilding after the loss of a loved one; writer, musician and educator Alicia Jo Rabins crafted a unit on using creativity as a vehicle for personal growth. The event’s organizing partners include PJ Library, the American Jewish Joint Distribution Committee and the Jewish Federations of North America.

“We’ve got synagogues that are Reform, synagogues that are Orthodox, synagogues that are Conservative and synagogues that don’t have a label, and JCCs and Hillels and Moishe Houses all participating in this program,” Singer said. “And what that says to me is there’s a place within Jewish life, to stick with your tribe, within the larger people, but it’s also important that we find ways that we can be one people and do things as a whole, that aren’t just for me or just for you, but for everyone.”

Joanna Benarroch, the chief executive of the Rabbi Sacks Legacy, which seeks to preserve Sacks’ memory and promote his work, told eJP that she expects 15,000 students to join a learning program yesterday or today in Sacks’ honor. All told, there will be tens of thousands of participants from more than 200 communities and schools in 23 countries — from Nigeria to the U.K. to Singapore to the U.S. The organization is providing resources in English, Hebrew, Spanish and French, which include biblical sources combined with Rabbi Sacks’ teachings on the theme of “From Optimism to Hope.”

“Communities from across the religious spectrum – as well as non-Jewish institutions… are taking part, underlining the global reach Rabbi Sacks had on those of all faiths and none,” Benarroch said, naming Rutgers University as one example of a nonsectarian participant. “The main objective is that there are people across the globe learning in memory of Rabbi Sacks.”

Limmud North America — with a full-time staff of two and a budget of about $350,000 — created a curriculum for its day of learning, with help from Covenant grantees, around the central theme of rebuilding. Its guide contains traditional Jewish texts, including excerpts of the Torah, Talmud and biblical commentators. It also features sources from modern writers and poets such as Avivah Zornberg, Yehuda Amichai, Marge Piercy, Meir Shalev and, of course, Sacks.

“For us at Limmud, we use Jewish learning because it’s a tool for bringing people together, because our ultimate goal is actually that convening of people and ideas and minds, because we believe that that’s a powerful opportunity to break down the silos and barriers in our community,” Singer said, adding that it’s become increasingly hard to have “conversations across difference. And we believe strongly that the act of learning is an opportunity for fighting that instinct, a countercultural effort to bring people together, and learn from people that are not the same as you even if you don’t agree with them.”