The dangers of ‘default’ Jewish leadership

People who are put forward in leadership roles are associated with knowledge and power. By limiting who is portrayed in leadership roles to only a small portion of the world, Jews and our surrounding cultures are receiving the message that those who appear physically outside of the norm of the “default body” are not knowledgeable and powerful. This message leads to continued disenfranchisement and discrimination in all spheres, not just the Jewish community.

It’s been 50 years this year since the Reform movement began ordaining women as rabbis. Despite the fact that it’s been half a century, and in most liberal Jewish denominations there are more women than men graduating from rabbinical school, women in this role still seem novel and require the gender qualifier “women.” If you look up “rabbi” on a Google image search, you’ll see lots of white men, mostly with beards. I just did this exercise and didn’t see a woman until image 65 in an ad for Hebrew College.

It’s no real surprise that when people picture “rabbis” they don’t picture a woman, a person of color or a trans person because, well, our faces and bodies are not presented  as what author Sonya Renee Taylor refers to as “default bodies.” In her book The Body is Not an Apology, she writes: “Aspects of default body change across culture and geography but it shapes our ideas of normalcy and impacts our social values. Our assumptions about the default identities of race, age, ability, sexual orientation, gender, size and so on become the bedrock upon which societies build body based oppression.” 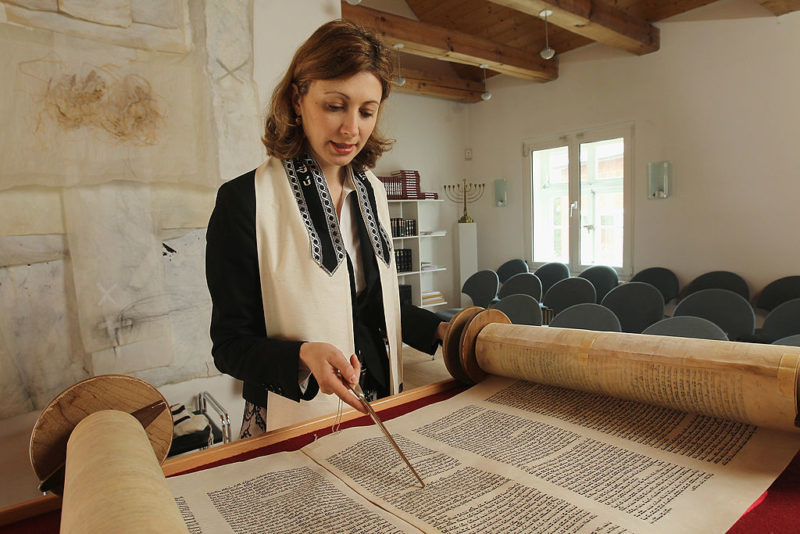 The default body of the American “rabbi” is assumed to be that of a white, able-bodied, cisgender man. Considering this reality, it’s no real surprise that, routinely, my role as a rabbi is called into question through micro aggressions, remarks or actions, often said without the intention of being hurtful, but that cast doubt upon a marginalized person’s membership in a group. Just this week I received an email in which I was addressed exclusively by my first name but the person referenced two other male rabbis I work with as “Rabbi Last Name.”  Earlier in the week, I was told by another person that initially they were thrown off by the idea of a female rabbi but later felt excited about the idea. I wonder how often my male colleagues are told others are  “thrown off” by their gender.

The dangers of this default “rabbi” image extends far beyond these examples of sexism, sex discrimination and gender harassment. This image disenfranchises rabbis who are Jews of color, queer, disabled or any other identities outside the realm of default. Similarly, the issue extends beyond just rabbis to all Jewish leaders (educators, nonprofit employees, academics etc).

People who are put forward in leadership roles are associated with knowledge and power. By limiting who is portrayed in leadership roles to only a small portion of the world, Jews and our surrounding cultures are receiving the message that those who appear physically outside of the norm of the “default body” are not knowledgeable and powerful. This message leads to continued disenfranchisement and discrimination in all spheres, not just the Jewish community.

Over the past year, I’ve become involved with the OpEd Project, an organization whose mission is to “change who writes history.” Katie Orenstein founded this organization after working as a journalist for many years and witnessing how rare it was to see opinion pieces written by people other than white men.  Being an alumni-ambassador for the OpEd Project has opened my eyes to how the image of “default” Jewish leadership is being perpetuated through the disproportionate number of white male leaders writing OpEd’s both in Jewish publications and in secular ones as well as those who are interviewed in magazines, newspapers and TV. The issue has been raised in the past to ban manels — all male panels — within the Jewish community and to encourage using more female voices in source sheets, known as the Kranjec test, but I’ve not seen a commitment to putting forward a more diverse pool of Jewish leaders when appearing in interviews, writing articles or op-eds.

When I was in rabbinical school, I remember hearing about a community where all of the rabbis committed to officiate at weddings only if kosher food was served. However, once one rabbi decided they no longer wanted to abide by this commitment, the system collapsed. The power of leaders committing to act together around an issue about which they felt passionately, moved me.

In Eruvin 13:b, we learn that halacha usually follows the  opinion of  Beit Hillel, because these rabbis and scholars not only taught the differing opinions of their colleagues from Beit Shammai, but they taught them first. The scholars of Beit Hillel are demonstrating an act of tzimtzum, translated as “contracting,” so that another’s voice can be elevated.

Male colleagues in all Jewish leadership roles, I know so many of you aspire to be allies. Here is something concrete you can do.

As we enter the next half century of women serving as rabbis and in countless other leadership roles, I would like to propose a contraction similar to Beit Hillel’s. What if we all committed that no pieces were going to be published by Jewish leaders unless they featured at least an equal number of marginalized leadership voices or, perhaps, even more. Yes, this will  take a little extra time. I’m sure it took Beit Hillel a little extra time too. But the reward will be great. Your non-male colleagues, both now and in the future, will receive the kavod, the respect and authority, that they deserve and by lifting up the voices of Jewish women, you will lift up the voices of all women and all people whose bodies don’t fit into the category of “default.”

The battles that women in leadership roles within the Jewish community face are similar to battles that other marginalized voices face. Judaism demands that we be a light unto all the nations of the world. Prejudice and discrimination are plagues found in every society. Here is a small step to combat these plagues within the Jewish community, and the impact will be felt far beyond our own synagogues and institutions.

Rabbi Amanda Schwartz is a rabbi/educator in Denver, Colorado. She is the Family Life Director at Judaism Your Way. She was ordained at The Jewish Theological Seminary in 2016, where she also received a masters in Jewish educational leadership.