Shooting hoops and biking as an act of philanthropy and memory

The annual Tour de Court in Baltimore has evolved from a friendly game to a fundraiser for the Leukemia and Lymphoma Society, in honor of the founders' sister 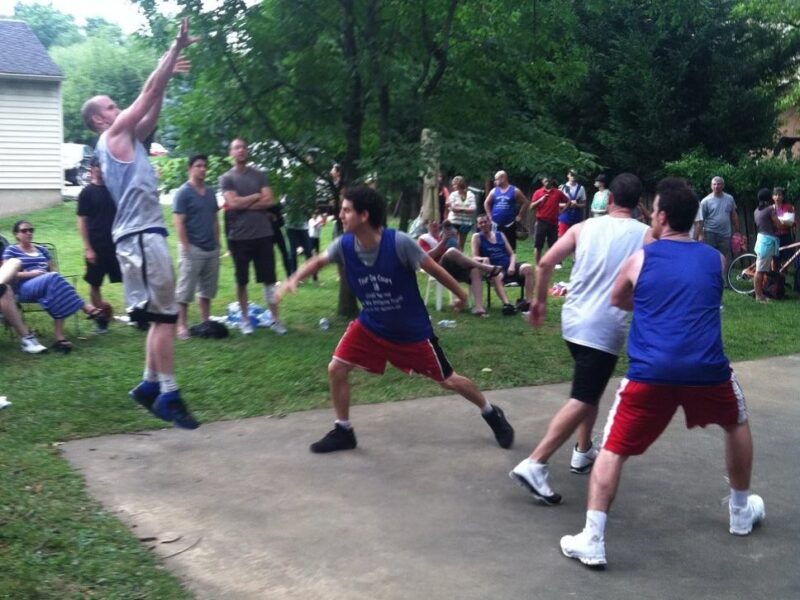 In 1995, a foursome of friends growing up in Baltimore created a biking and basketball competition that started off small but, over the decades, would become a community fixture. During the summer, they would hop on their bikes most days and find a basketball court in the neighborhood, usually in people’s backyards or driveways, for a friendly but hard-fought game of two-on-two. “We were just a group of bored teenagers looking for something to do,” Jon Minkove told eJewishPhilanthropy.

And thus was born the Tour de Court, a series of bike rides and hoops games that culminated in a tournament. In its second year, the Tour de Court had 16 players, Jon told eJP, adding that Jon’s brother, Sam Minkove, six years his junior, was allowed into the competition in 2001, “when he came of age.”

Nearly 30 years later, the Tour de Court is still hooping (and cycling) it up, but with a new purpose and mission. While the first two decades were “purely for bragging rights,” tour co-founder Jon told eJewishPhilanthropy, today’s Tour de Court is powered by philanthropy, friendship and memory as a fundraiser to honor the Minkoves’ sister, Rachel, who died in 2012 after battling Hodgkin’s lymphoma. To date, the competition has raised more than $300,000 for Maryland’s Leukemia and Lymphoma Society; the founders hope to raise another $60,000 this year, to support three organizations that aid people experiencing cancer and other health challenges.

Their effort continues to reunite kids from the neighborhood, most of them now adults — one has a child playing in this year’s tournament — as they pursue the grand prize: a gold helmet, upon which the names of the champions will be engraved. The helmet has become a celebrity in its own right, making the rounds to appear at weddings, circumcisions and b’nei mitzvah celebrations.

Team members from the early years, now in their 40s, feel a powerful dose of nostalgia for youth.

“Those first moments where you get on that bike and you’re with your team, talking about your hopes for the day, it really just takes you back to your childhood,” Jon said. “You could be 40 years old, and you’re doing the same routes to the same basketball courts that you did in 2006 and 1997. That’s the charm of it. And now we’re doing it also for a greater purpose, which adds to it, and gives it meaning, but it’s still the same at its heart. It’s still the same circus founded by the same ridiculous people who come back together, every single year and get the juices flowing, when you get on that bike, and you start out your day and partake in this ridiculous but meaningful ceremony.”

Each year, the Tour de Court began with the Minkoves and tournament participants gathering in the Minkove family driveway for “opening ceremonies,” a loud and joyous affair that woke up the neighborhood — including their sister Rachel, who failed to see the appeal of the event, the brothers said.

“Not only wasn’t Rachel involved, but she made fun of the fact that we would continue to do it for no reason,” Jon recalled.

Then, in fall 2008, Rachel was diagnosed with Hodgkin’s lymphoma and the Tour de Court crew decided to honor her by making the event a fundraiser for the Leukemia and Lymphoma Society. They started raising money informally, through their networks; as internet fundraising became easier and social media became more popular, donations skyrocketed, the Minkoves told eJP. Traditionally, donations have ranged from $10 to $1,000, with an average gift of $125; and in 2019, the brothers decided to become a Maryland-recognized charity and 501(c)(3) organization.

“It kind of took on a life of its own, and has become a Rachel Minkove memorial tournament that has taken on a new communal life with extra meaning for our family and for anyone that knew her,” Jon said.

“All of the crew and their (then) children were always so kind and welcoming in every way and had, and still have, a great spirit of positivity and goodness,” Rabbi Aaron Frank told eJP. Frank, the current head of school at Kinneret Day School in Riverdale, N.Y., is the former high school principal of Baltimore’s Beth Tfiloh Dahan Community School, which the Minkoves and many other tournament participants attended. “The Minkoves are amazing people,” he said. “Watching them go through what they went through with Rachel — no one should have to go through something like that.” Frank said the transition of the Tour de Court into a fundraiser was “very organic,” calling the prayers and the community gatherings around the event “beautiful.” These events “solidified their strong place in my heart and the community,” Frank added.

The tour still kicks off at the Minkove house at 8 a.m.; neighbors are reminded that it’s Tour de Court day by blasts of music served up by the event’s DJ. After reviewing the rules and listening to a few speeches (in the last few years, the Baltimore mayor, Brandon Scott, has competed in the tournament), participants pedal off on their bikes to their designated court, no more than two miles away, in people’s backyards or driveways. Then the games begin: There are round-robin matches, and ultimately semifinals and finals. The championship game usually concludes in mid-afternoon, and the event culminates in a barbecue and a Baltimore special: snowballs (shaved ice).

Over the years, the tour has seen a few changes. While competitors are generally male, a women’s tour was added in 2015. Originally, participation was for Baltimoreans only, and people outside the geographical area “had to submit applications explaining why they should be considered honorary Baltimoreans,” Jon told eJP, adding that they’re much more flexible now that the event is a fundraiser.

This year, in addition to raising funds for the Maryland chapter of LLS, proceeds will support projects at the Ulman Foundation and the Jewish Caring Network, two causes that the Minkove brothers believe their sister would have approved of. The Ulman Foundation’s mission is to support young adults living with cancer, providing college scholarships, transportation to and from a hospital, if needed, and a lot of social events, Sam said. In the fall, the Tour de Court will be dedicating a courtyard at Ulman House, a hospitality home for young adult cancer patients, “where patients can unwind, shoot hoops and hang out, and have some normalcy for a few minutes during difficult times,” Jon said. The Jewish Caring Network helps community members who are undergoing difficulties — usually health-related — offering Shabbat meals or other support that the person needs.

“[Rachel] felt very socially isolated, as a young adult living with cancer,” Sam said. “She had tons and tons of friends, but they were living their own lives and not having the same experience as she was. So she felt that it was really important to kind of bring people together that had similar issues.”

Honoring his sister’s memory remains a central part of the Tour de Court, Sam said. “Everyone in the community wants to come back and play every year. And everyone knows that they’re coming back to play in memory of Rachel Minkove. And the fact that she’s able to carry on her legacy that way is really meaningful for us and for our parents as well.”

“Rachel was all about bringing people together,” Jon said. “And that is 100% what this is about.”