We never thought that climate activism would be part of our rabbinic training but we also never thought that the market would ignore decades of scientific warnings that our global systems were making the world uninhabitable. The climate crisis is a concrete disaster affecting every community where we might work.

Every morning we chant the Shema – “Listen!” in our rabbinical seminary’s sanctuary. Last Wednesday morning, we chanted our daily prayer in a very different setting, through a microphone to hundreds of people outside BlackRock’s midtown Manhattan offices. Instead of a peaceful meditation, it was a powerful call to investors and employees to realign their investments away from fossil fuel expansion. On the morning of BlackRock’s annual general meeting, we prayed that BlackRock would “Listen!” Listen to the scientists, the economists, to the 80% of Jewish Americans who agree that climate change is a crisis, and to the 8 billion people who call this beautiful planet home.

The Shema begins with a call to listen, while the paragraph that follows, V’ahavtah, “and you shall love,” charges us to love God with “All our Might.” Some rabbis interpret these words to mean “with all our possessions” or “with all our money.” This understanding not only calls on us to love God with “all our might” by confronting the climate crisis, it also demands that we leverage all of our financial resources in the fight for a clean planet. This interpretation has lent Dayenu a fitting name for our new, multi-year All Our Might campaign which seeks to pressure financial institutions, like BlackRock, to realign their investments away from the fossil fuel industry. 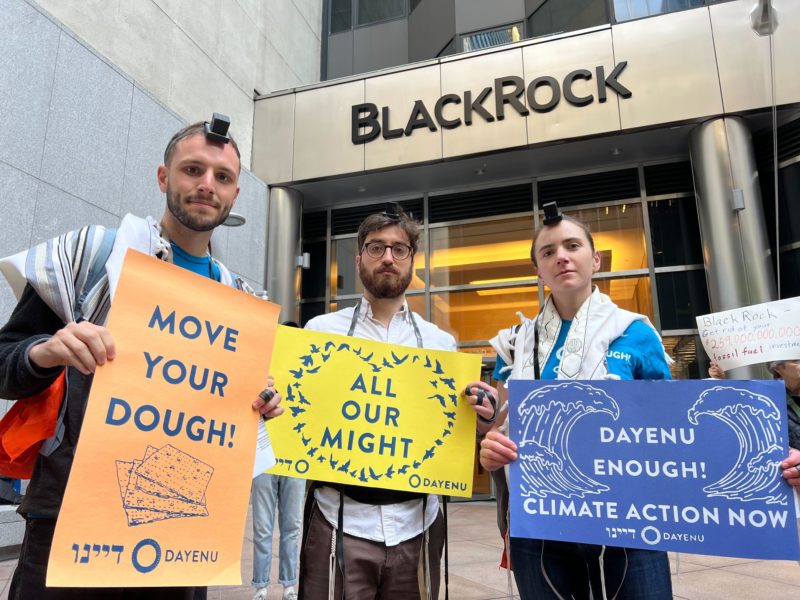 BlackRock has an incredible amount of might — $9.6 trillion in managed assets. That is more than the GDP of every country but the U.S. and China. These assets mean BlackRock has the power — and the responsibility — to make investment decisions with seismic consequences for the future. Despite publicly stating that it will make climate change central to its investment strategy, Black Rock still invests in companies expanding fossil fuel extraction, including a recent $15 billion dollar deal for Saudi Aramco’s gas pipeline subsidiary. This dangerous backsliding is why fourteen community leaders from different faith traditions risked arrest early that morning to demand that BlackRock end investment in companies expanding fossil fuel production.

Inside the shareholder meeting, BlackRock’s CEO, Larry Fink, appeared to distance himself from previous statements he’d made on climate change, like his 2020 letter to shareholders calling on companies to rapidly cut greenhouse emissions. In May, BlackRock told Texas pension officials that it would not exclude the worst emitters from its portfolios, and in a letter to investors, said it would not support shareholder proposals on emissions it felt were “too prescriptive.”

We never thought that climate activism would be part of our rabbinic training, but we also never thought that the market would ignore decades of scientific warnings that our global systems were making the world uninhabitable. The climate crisis is a concrete disaster affecting every community where we might work. As future clergy members, we spend many class hours studying how to guide individuals through life’s triumphs and tragedies. Today, that means supporting community members experiencing climate change anxiety and related traumas. This is already a regular feature of a clergy member’s day-to-day work. Without question, our rabbinates will be marked by caring for communities through intensifying natural disasters, the effects of scarce resources and an increasingly fractious political atmosphere.

Climate change is the greatest threat facing the 5,000-year-old tradition we’ve inherited. More than antisemitism or assimilation, the global Jewish community is threatened by the climate crisis. It’s why Jews in the U.S. consistently report climate as their top voting issue. We took our morning prayers to BlackRock because stewarding this living tradition in 2022 means taking action for climate justice. We hope you will join us in calling on financial institutions to “Listen!” by “moving their dough” away from gas and coal companies that are fueling the climate crisis.

Andy Weissfeld is a a fourth-year rabbinical student at the Jewish Theological Seminary in New York, where he is also pursuing a master’s in education. He is the Dayenu rabbinical school climate organizing fellow.

Sarah Rockford is a first-year rabbinical student at the Jewish Theological Seminary and a Dayenu fellow.