Looking beyond the horizon (Tisha B’Av 5781)

The word “horizon” is tricky. We generally refer to the horizon as an indication of expansiveness, even limitlessness. But etymologically, the word means exactly the opposite. It comes from the Greek word “horizein,” which means “limit.” The horizon is, in fact, the limit of our vision — in Hebrew, as well, where the word for horizon, “ofek,” has the same root as “restrain, constraint, limit.”

The horizon tells us clearly that there’s a boundary to our field of vision and even a limit to our imagination. And we experience that in physical, emotional, and spiritual ways. 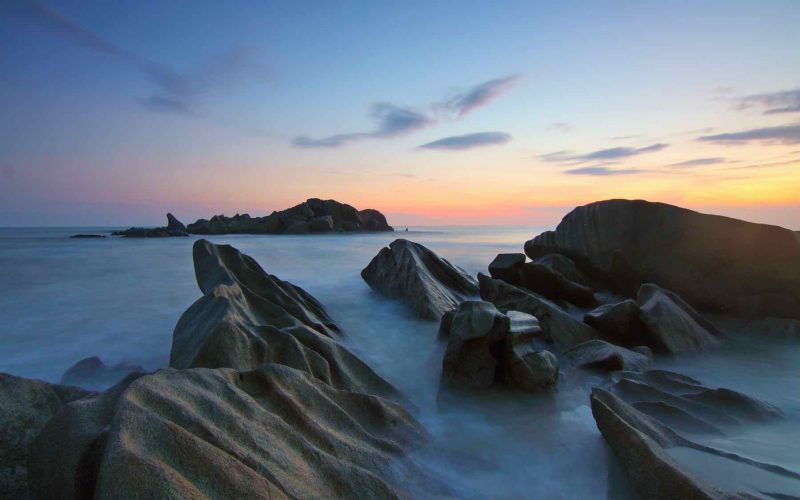 In times of great grief, sorrow, or distress, our horizon collapses onto us. We can’t see beyond the pain and anxiety; we are limited to the here and now of despair. That is, in fact, what despair is: the inability to expect something good from across the threshold of sadness.

There’s no sadder Jewish holiday than Tisha B’Av. In it, we mourn the destruction of the Temple of Jerusalem, the loss of our sovereignty, and many other historical tragedies that seem to congregate on this day. However, among the long list of calamities that befell on us on that day, there’s one discordant note: a series of oblique references to the fact that the Messiah will be born on Tisha B’Av.

It sounds incongruent, but it starts making sense when you consider the unique Jewish understanding of time. As many thinkers have noted, Judaism breaks the pagan notion of time as something cyclical, eternal, and ever-repeating. In paganism, including the most evolved version of Greek paganism, time had no beginning and no end; it moved in cycles and went nowhere. Judaism brings the notion of time that evolves, a time that is the arena for human development and growth. Yes, we have cycles too, like the yearly cycle of holidays, but there’s progress and evolution as we also transcend those cycles. Every turn of the wheel needs to find us in a different existential place, as in the Hasidic story in which a student excuses himself from class to go and practice the readings of the Machzor (High Holiday prayerbook) only to be chastised by the rabbi who says, “The Machzor didn’t change, but have you?” What’s true for individuals is also true for our people and for human society as a whole. For us, as the French Jewish philosopher Emmanuel Levinas said, “le temps va quelque part”: “Time goes somewhere.” Or, as the Rev. Martin Luther King, Jr., said, there’s an arc of history that may be long, but bends towards a better future.

The world, especially the Western world, has largely adopted a view of time influenced by this Jewish idea but has simplified it a bit too much. The modern West believes in the idea of permanent linear progress, and that, some suggest, makes us less resilient in the face of frustration, disappointments, and setbacks. Every bad thing that happens to us is seen as a cosmic injustice, like a basic betrayal to the idea of progress, a sign that everything is lost. The birth of the Messiah in the midst of tragedy, however, tells a different story: that setbacks are not permanent, frustrations can be overcome, disappointments don’t last forever, and that despite pain and sorrow there’s always a bright future ahead.

The horizon of grief may limit our vision, but Judaism pushes us to see beyond it; to understand that what was lost can be recovered, what was destroyed can be rebuilt. There’s always hope beyond the horizon of doom. That’s why British Chief Rabbi Jonathan Sacks z’l aptly said that in Judaism, “time is a narrative of hope.” That hope is given by the idea that history has a purpose and humanity a destiny, that human life has meaning. There can be setbacks, but there is a bigger story: a destination beyond the horizon and a way to get there, a road paved with kindness, justice, and good deeds.

Tisha B’Av is an invitation to embrace grief as part of our twisted road towards our full realization, but also an encouragement to transcend it, to see beyond that pain. It invites us to remember, even in the darkest of times, that a better future is possible and that our lives, individually and collectively, have a role to play in the magnificent drama of redemption.

Maybe Tisha B’Av teaches us to use “not yet” instead of “no.” Is the world at peace? Not yet, but it will be one day. Is antisemitism a thing of the past? Not yet, but we believe it will be. Are disease and suffering eradicated? Not yet, but we can do it and we will. This day of sadness challenges us to keep moving the goalposts of human growth forward, to labor towards making our world worthy of that Messiah born in the gloom of this day.

Instead of believing in the infantile version of the Messiah as the superhero that comes to us from the outside, Tisha B’Av calls us to take responsibility and to bring redemption together, one step at a time, one act of compassion at a time. It tells us that hopelessness is only an optical illusion, a product of our incapacity to see past the horizon of hardship. That horizon is not real, for it moves with us, the further we advance, the farther that false limit moves.

How do we cross that false limit? By striving to be true to ourselves and a blessing to others, by taking wisdom from any source where it may be found, by using every opportunity to connect with others and make a difference in their lives, by being intellectually curious and relentlessly compassionate. Despair comes from “des” (not) and “esperare” (expect). Precisely on Tisha B’Av, amid the ruins of our Temple and the rubble of our dreams, we are told never to cease expecting better things, never to cease hoping. On the darkest day of the year, a baby is born, one whose cries tell us that hope is the ultimate strength.