Leading up to Tisha B’Av, rabbis see echoes of the past in America’s current polarization

Jewish leaders across the denominational spectrum are seeking to heal American social tension leading up to the fast day. 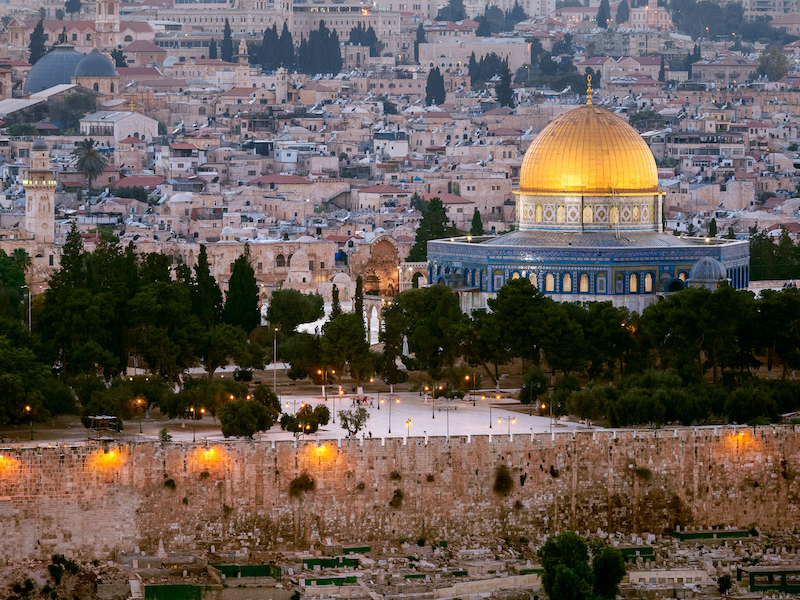 The Temple Mount in Jerusalem

In Highland Park, Ill., the site of the July Fourth shooting that killed seven people, a Chabad synagogue is holding a “Mitzvah Market” on Sunday, a fast day that marks the beginning of the Jewish mourning period known as the Three Weeks. It’s an “opportunity for healing,” said Motti Seligson, a spokesman for the Chabad-Lubavitch movement.

In Albany, N.Y., a Reform congregation will be marking the same period, which ends with Tisha B’Av, considered the saddest day on the Jewish calendar, by “turning grief and injustice into action.”

And the Reconstructing Judaism movement is training its sights on reparations for Black Americans as a way to “repair the brokenness around us.”

In the days leading up to the Three Weeks, which begin with the Fast of Tammuz on Sunday, Jewish leaders across the denominational spectrum are seeking to heal the social tension that has impacted Americans within synagogue walls and beyond. Rabbis see the country’s current political polarization echoed in the themes of Tisha B’Av, which commemorates the destruction of the two Jewish Holy Temples of ancient times and a string of later tragedies. According to rabbinic tradition, the Second Temple was destroyed in 70 C.E. due to societal ills that may feel familiar today: sinat chinam, or baseless hatred, and internecine fighting among Jews.

“Based on Jewish teaching, we understand that the Temple in Jerusalem, the Holy Temple, was destroyed because of senseless hate,” Seligson,  who 20 years ago ran children’s educational programming at Highland Park’s Central Avenue Synagogue, a Chabad congregation, told eJewishPhilanthropy. “And it’s through love for one another that it will be restored and rebuilt.”

Seligson said that traditional observance is a way to combat divisiveness. “Through the rituals of Tisha B’Av, through reading Eichah and fasting and coming together as a community and mourning, it’s an opportunity to take stock of where we are and ensure that we’re a people that are looking after one another and loving one another.”

At Sunday’s “Mitzvah Market” at the synagogue, as part of the Highland Park community pulling together in the wake of the shooting, children will be able to write notes to seniors, draw get well cards to be delivered to hospitals and bake challah and cookies for first responders.

Teaching the importance of compromise during trying times is essential to Rabbi Ben Kean of  Congregation Beth Abraham-Jacob, an Orthodox synagogue in Albany, N.Y. He told eJP that he teaches congregants to follow the model of Rabban Yohanan Ben Zakkai who, during the siege of Jerusalem, “accepted that the Temple was being destroyed and decided to move on to a new model for how to sustain Judaism.” According to rabbinic sources, he escaped the city in a coffin and then negotiated with the Romans to ensure Judaism could continue to be practiced, Kean said, “albeit in a slightly moderated form.”

Kean said that “political zealots were the ones who were really making lives miserable for the Jews living in Jerusalem.” According to traditional accounts, they burned down the community’s food supply and “wouldn’t allow people to leave the city because they wanted everyone to stay and fight until the last man standing, even though it was clearly a losing project.” The message he hopes to spread this year is that these zealots took a “zero-sum approach” that modern Jews should avoid.

“When we take that approach, and it’s win at all costs, even if it means destroying everything around us, it’s not one that sets us up for success and for future thriving,” he said. “Sometimes what we need to do in order to survive includes compromises, including with people that you might think are impossible to compromise with.”

Other denominations connect to the holiday in different ways. “Many Reform congregations ignore or do very little in observance of the holiday because there’s no longer a Reform concern for rebuilding the Temple,” Rabbi David Katz of  Temple Concord in Syracuse, N.Y., told eJP. But several Reform congregations find meaning in remembering the numerous other tragedies that befell the Jewish people on what is considered the saddest day on the Jewish calendar, including the expulsion of England’s Jews in 1290, the expulsion of Spain’s Jews in 1492, and the beginning of the mass deportation of Jews from the Warsaw Ghetto in 1942.

“It’s a reminder to acknowledge our own suffering and the suffering in the larger world, and then find a way to help fix some of the brokenness,” Rabbi Danielle Weisbrot of Albany’s B’nai Sholom, a Reform congregation, told eJP. She said Reform Judaism emphasizes “turning grief and injustice into action,” so her synagogue regularly organizes food and clothing drives, blood drives and projects related to immigration, climate change, LGBTQ+ rights and racial equality.

The Reconstructing Judaism movement, meanwhile, has created a Tisha B’Av curriculum for congregations based around reparations for African Americans and Native Americans, believing that a society cannot unite and repair if it doesn’t acknowledge that it is damaged. The movement is encouraging congregations to study the curriculum, with an emphasis on taking inventory during the seven weeks between Tisha B’Av and Rosh Hashanah. Later this fall, there will be a vote on a resolution for the wider movement to take a stand in support of reparations for slavery, systemic racism and the mistreatment of Native Americans.

“We have to begin with the process of acknowledging the brokenness, the destruction in the world around us, before we can begin to kind of envision how we might repair, how we might collectively, individually, organizationally be accountable for the harm that we benefit from, that we exist within,” Rabbi Micah Weiss, Reconstructing Judaism’s assistant director of thriving communities and “tikkun olam specialist,” told eJP. “We have to see that it is there and be in that brokenness. And there’s some estrangement from that, from what we might hope or feel attached to, of an America that we wish is or was.”

Not all communities are necessarily drawing a link between Tisha B’Av and current events. Rabbi Abba Cohen, vice president of government affairs for the Haredi organization Agudath Israel of America, told eJP that his community will be observing Tisha B’Av the same way it “has for the past two millennia.” Rabbi Moshe Hauer, executive vice president of the Orthodox Union, told eJP that individual Orthodox synagogues may each come up with ways to address political polarization “with messaging and methods most appropriate to their congregation.”

The Conservative movement is hoping to connect recent news and traditional texts. It is holding two learning sessions for rabbis surrounding Tisha B’Av. taught by Rabbi Lauren Tuchman and Rabbi Dan Ornstein, respectively. One will feature a close reading of sermons delivered by Rabbi Kalonymous Kalman Shapira in the Warsaw Ghetto and the other will focus on the seven Haftarot, or weekly readings from the Prophets, read between Tisha B’Av and Rosh Hashanah, all of which share the theme of consolation. That lesson explores how communities can heal from destruction and take action.

Rabbi Ashira Konigsburg, chief program officer at the United Synagogue of Conservative Judaism, told eJP that Tisha B’Av will give people a time to experience grief stemming from recent political developments and “the erosion of human rights and democracy.” She said the Conservative movement hopes to support congregants year-round, creating spaces where people feel connected even if they don’t always agree.