JIMENA aims to convene the Sephardic and Mizrahi community, with support from JCRIF 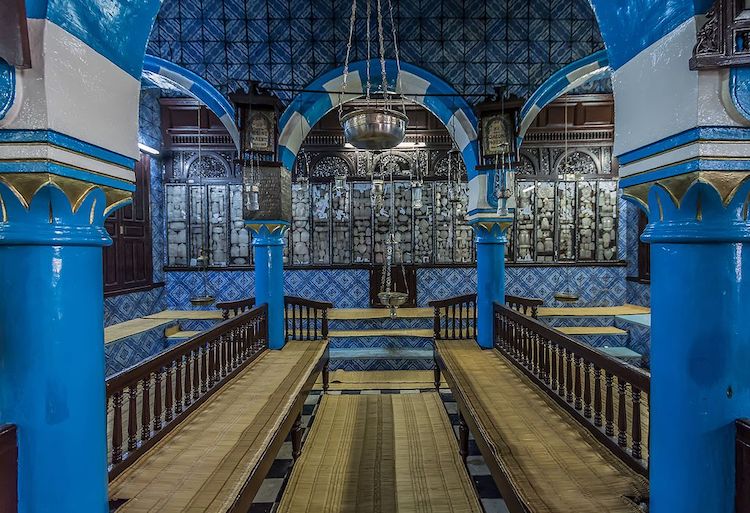 The synagogue of Djerba, in Tunisia

About eight years ago, Sarah Levin went to Evanston, Ill., for a family visit. What the executive director of Jews Indigenous to the Middle East and North Africa (JIMENA) thought would be a typical trip home turned out to be more of a roots trip, during which she learned from reading century-old synagogue minutes that her great-grandparents, immigrants from Turkey, had been fierce advocates for the rights of the Sephardic community.

“My great-grandfather wasn’t accepted by other Jews, and that wasn’t uncommon for his generation at all,” Levin said. “This is part of my lineage. I’m so proud to be part of this family.”

JIMENA was founded in 2002 as a project of the Bay Area JCRC, during a period that saw other groups being formed around the interests of Jews who follow the customs of Spain (Sephardic) or of North Africa and the Middle East (Mizrahi). JIMENA’s founders were themselves refugees from the Middle East and North Africa determined to deepen the Jewish community’s understanding of the experiences and histories of Jews from that region.

“The heart of it has always been that of our parents, grandparents and great-grandparents, who never talked about the stories of their lives. It was such a privilege in those first few years to give elderly people an opportunity to talk to a Jewish organization that recognized them,” Levin said.

JIMENA continues to do that work, but it’s also broadening its mission. With support from the Jewish Community Response and Impact Fund’s (JCRIF) Reset program, JIMENA is preparing to serve as a convener of the Sephardic and Mizrahi community in the United States, and to help that community stake its claim as leaders of the community as a whole. Sephardic and Mizrahi traditions are particularly relevant in this moment of debate about justice and equity in the Jewish world and in American society, Levin said.

“This grant is an acknowledgement by the established Jewish community that JIMENA should go national, and that their issues should become part of the national agenda,” said Henry Green, a professor at the University of Miami, who in 2009 created Sephardi Voices, an organization that interviews Sephardi and Mizrahi Jews to collect their stories in oral histories and on film.

JCRIF was founded by the Charles and Lynn Schusterman Family Philanthropies, the Jim Joseph Foundation, the Maimonides Fund, The Paul E. Singer Foundation, and the Jack, Joseph, and Morton Mandel Foundation as an emergency fund to protect hard-hit Jewish institutions during the early days of the pandemic. In February 2021, it announced the Reset program, which asked communal organizations to mine the disruptive experience of the pandemic for inspiration. The funders approved $24 million in grants to eight organizations, including JIMENA, which will use the funding to conduct a first-ever demographic study of Sephardic and Mizrahi Jews in the United States, and to create leadership programs for Sephardic and Mizrahi professionals, intellectuals, lay leaders and allies.

The community has long debated the question of to what extent it could or should maintain a separate identity from the Ashkenazi majority, Sheskin added, recalling a 1992 event hosted by the American Sephardi Federation that commemorated the 500th anniversary of the Spanish Inquisition during which that topic was widely discussed.

Levin’s answer: “We should be able to do both, to assimilate and to hold onto our heritage and our culture.”

Levin traces her ability to help JIMENA become a more powerful advocate for its community to a turning point she experienced as an undergraduate at the University of Oregon, from which she graduated in 2003. She wasn’t connected to the Jewish community during those years, and found herself called on to represent the Jewish perspective in classes and conversations about Israel and the Middle East. She realized that her peers didn’t understand Israel’s culture or its history, considering it purely Ashkenazi and European despite the influence of Sephardic and Mizrahi culture.

This experience also helped Levin understand the extent to which her own Sephardic heritage had been obscured by the demographic dominance of Ashkenazi traditions in American Jewry.

“We’ve been fighting for 100 years to be included, and we’ve just accepted that we are only going to be seen as insular, and accepted that the only thing Ashkenazi [Jews] are interested in is our food,” she said. “So much has been lost.”

Levin went to Israel after college and stayed for 10 years, connecting shortly before she left with one of JIMENA’s cofounders, Gina Waldman, as the organization was being created. Levin was thrilled that such a group was coming into existence and stayed connected to it. When she returned to the United States in 2009, there was a job opening.

“I helped to articulate a vision that hadn’t been articulated by a younger person in an empowered way,” she said, adding that she grew the organization with the help of a “tremendous network” of volunteers, staff and partner organizations.

In her time at JIMENA, Levin has created new projects that have raised the profile of Sephardic and Mizrahi Jews, such as a six-month leaders fellowship supported by the Jewish Community Federation and Endowment Fund in the Bay Area, and built bridges between the community’s organizations, Waldman said. “From day one, her agenda has always been to strengthen the position of all Sephardic and Mizrahi Jewish organizations, leaders and community members, and this is why she is able to naturally lead this exciting new initiative,” Waldman said.

JIMENA’s determination to expand its mission still further can’t be divorced from efforts made by Jews of Color to gain representation and power, which were themselves fueled by a broader conversation about race in the wake of the police killing of George Floyd in May 2020. JIMENA and its supporters and constituency found the campaigns by Jews of Color a source of both inspiration and pain, Levin said.

“It was an amazing moment when we saw the Jews of Color movement gaining ground,” she said. “There was no question that we were going to support this push. We understand what it means to be on the outside.”

However, Sephardic and Mizrahi leaders also spoke privately with each other at the time that they felt a similar lack of representation and power, and had felt that way for most of American history — a real irony, Levin pointed out, given that Sephardic Jews who settled in New Amsterdam — present-day New York City — from Brazil in 1654 were the first group of Jews to settle in what became the United States. What’s more, the Sephardic and Mizrahi communities were sensitive to the perception that they were themselves Jews of Color, as in the Jews of Color Initiative’s most recent survey, which included them in that category.

“Young leaders would call me in tears,” Levin said, “saying that [Jewish organizations were] calling me a Jew of Color and they’re still not recognizing my story or my heritage. Our communities were still not being served. We felt more excluded than we had in a long time.”

Levin is careful to note that there are pockets of integration and equality, such as the Hillel chapters at both Stanford University and the University of California, Los Angeles, which both include Sephardic prayer groups, and the Jewish Community Federation and Endowment Fund that funds JIMENA’s leaders fellowship. The American Sephardi Federation is a longstanding member of the Conference of Presidents of Major American Jewish Organizations.

She has also, more recently, noticed some changes in attitudes, including a higher awareness among Ashkenazi Jews that they share the United States with other Jewish groups.

“Everyone has familiarized themselves with the term ‘Ashkenormativity,’” she said. “Not everyone is from Europe and eats those foods.”

JIMENA has created a curriculum that has been adopted in 300 institutions in North America.

The group also advocated successfully to have its lesson plan about the Mizrahi Jewish experience included in California’s ethnic studies curriculum, which Jewish groups had criticized for antisemitic content and references to the Boycott, Divestment and Sanctions (BDS) movement against Israel.

However, more needs to be done to make more Jewish spaces fully inclusive of Sephardic and Mizrahi Jews, Levin said, suggesting hiring members of those communities to teach Torah, to serve as staff and to design programs.

To more effectively pursue their mission and to optimize their chance to secure a Reset grant, JIMENA led a community needs assessment in 2020 that brought 40 leaders together to talk about what they think is most needed.

“It was the first time all of these leaders worked together and that in itself was a breakthrough,” she said. The Sephardic and Mizrahi world is itself composed of many distinct communities, such as the Syrian community in the New York area, and the Persian community in Los Angeles, with different customs, languages and histories. They form a mosaic that’s very different from the culture of Ashkenazi Jewry, which more than a century after the great wave of immigration from Eastern Europe started, has become relatively homogenous, Green said.

Mijal Bitton, a scholar in residence at the Shalom Hartman Institute, will lead the demographic study. The leadership-training component will offer several projects and programs with the aim of building communal infrastructure, Levin said.

The broader community will be enriched religiously and culturally, and will also benefit politically, she said.

“The larger Jewish community is aware that people are feeling excluded,” she said. “We can offer an answer to those questions. Our ancestors have given us a blueprint for multicultural living.”