Inside the new project to professionalize the Jewish retreat sector

Retreat Jewish plans to produce targeted research about the field and organize its leaders into peer cohorts. 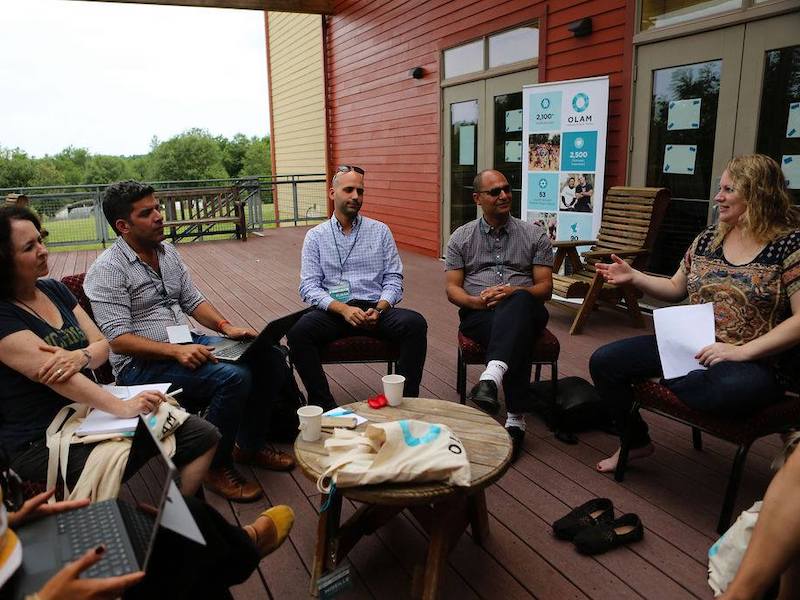 A conference at the Pearlstone Retreat Center in 2019.

During a decade serving as the CEO of Capital Camps, a Jewish overnight camp in Waynesboro, Pa., one of David Phillips’ central missions was to renovate the camp’s retreat center — a construction project that took two phases, seven years and approximately $21 million in capital campaign funding.

But despite the years and dollars that Phillips was prepared to invest, there was one thing he couldn’t find: someone to consult with on designing the camp’s retreat lodges. There were multiple sources available on best practices in Jewish camping, but nothing on the art and science of Jewish retreats.

Now, a decade later, Phillips and a colleague, Josh Fidler, hope to fill that gap. This week, the duo announced the launch of Retreat Jewish, an initiative designed to support Jewish retreat operators and organizers across the country and professionalize the field.

“It’s pretty much the last bastion of Jewish communal life where there is no infrastructure to support it on a national level,” Phillips, a former Jewish federation head who now runs Immersive1st, a nonprofit consulting business that focuses on immersive experiences, told eJewishPhilanthropy regarding Jewish retreats.

Jewish retreats are typically multi-day gatherings in a pastoral space that seek to draw participants out of their routines in order to grow spiritually or connect with their heritage. They take a number of formats: from organizational programs and youth group encampments to family-centered activities or Jewish holiday celebrations.

According to “Advancing Jewish Retreating,” a 2020 study by Amy L. Sales and Nicole Samuel, researchers at Brandeis University’s Cohen Center for Modern Jewish Studies, Jewish retreat centers collectively drew more than 100,000 people annually before the pandemic. Retreat Jewish is affiliated with the Baltimore-area Pearlstone Retreat Center, one of the largest Jewish retreat centers in North America, and is an 18-month seed project with $500,000 in funding from the Jim Joseph Foundation and The Marcus Foundation.

Fidler and Phillips hope the project will continue beyond that timeframe if they’re able to produce targeted research about the field, organize its leaders into peer cohorts and, most importantly, be seen as valuable by those working at and leading Jewish retreats.

“A lot of people saw retreating as a sideline and few people understood retreating as a profession,” says Fidler, a real estate developer and the founding chair of Pearlstone, which is affiliated with The Associated: Jewish Federation of Baltimore. “So one of the things that we intend to do with Retreat Jewish is to create tools, techniques, best practices, some common and hopefully enhanced resources to professionalize the field and to make sure that experiences deliver fundamentally for participants.”

Retreats are especially warranted In today’s “fractured world” where people contend with multiple identities, said Rabbi Irwin Kula, co-president of CLAL, The National Jewish Center for Learning and Leadership, based in New York City. Kula said the immersive environment of Jewish retreats creates “a place where we can bring all of ourselves,” and gives participants an opportunity to have Jewish identity and practice “play a significant role in who we are.”

One of the challenges in the field involves matching Jewish retreat organizers with Jewish retreat sites. The 2020 Cohen Center survey described an “ecosystem” of more than 200 organizers, but found that only 40% of their retreats are held in Jewish settings. Organizers interviewed in the study said they often have no feasible Jewish options when considering a place that checks all their boxes for location, capacity, comfort and cost. For example, only three of the 42 Jewish retreat sites that participated in the study are open year-round.

Sixty percent of the organizers who participated in the study indicated that having “an easy way to find appropriate facilities for their retreats” would be very helpful to save time and energy for other activities. The study indicated that operators, likewise, also need to better understand how to bridge the gap between what they are offering and what organizers are looking for.

The study also showed that although the number of retreats and participants grew between 2015 and 2018, Jewish participants decreased during that time as a percentage of total business, which “may reflect a need for improved services and marketing to Jewish groups.”

To address some of these challenges, Retreat Jewish will run two professional cohorts of eight retreat site operators each, who will begin meeting later in the year to share best practices and discuss needs in the field. The cohorts aim to give the operators access to a peer support system, increased marketing knowledge and grants to be able to attract more Jewish retreat organizers, as well as knowledge to make more strategic capital investments. They will also receive training in hospitality, programming and food service.

“We talked so much about the power of connectivity and of Jewish retreating and what it does for the individual or the organization in terms of community building,” says Eve Wachhaus, COO of Pearlstone and the Hazon, the Jewish environmental group, which are currently undergoing a merger that’s expected to be finalized this year. “But we have never created a community amongst all of the Jewish retreat centers and those that organize with Jewish retreats, and now we are.”

Sales will also conduct additional research, on behalf of Retreat Jewish, based on the takeaways from the cohort meetings. In addition, Phillips will update a Jewish retreat landscape assessment he conducted in 2015 that will take stock of the wishes of retreat operators and organizers.