Daffy, founded by a Jewish day school parent, is now allowing a minimum donation of $18 to Jewish causes. 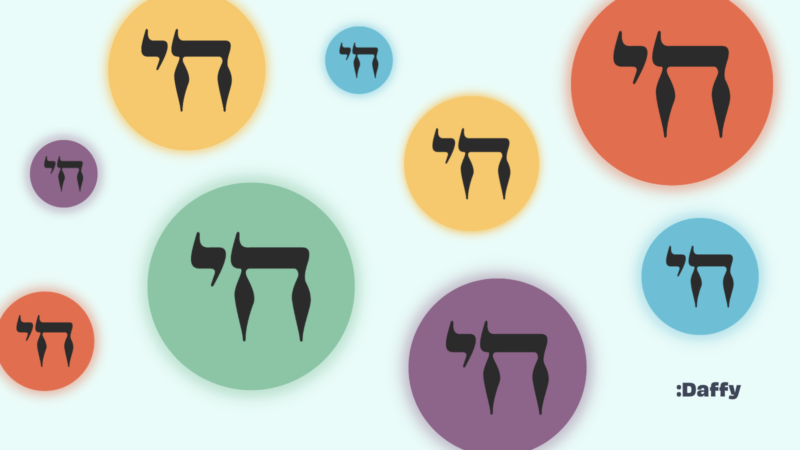 Donors who give certain multiples of $18 on Daffy will see these emojis cascade down their screens.

It only took some feedback for Daffy, a charity app, to program in a shower of rainbow chai emojis for users as thanks for donating to Jewish nonprofits.

Launched last year by Adam Nash, an active member of the Bay Area’s Jewish community, Daffy’s goal is to make a tool that’s increasingly used by the wealthy accessible to small donors as well. Daffy is a donor-advised fund, or DAF, which allows users to park their charitable giving in an account and more easily donate to a range of nonprofits. DAFs have skyrocketed in popularity, growing 27% from 2019 to 2020, according to a National Philanthropic Trust survey conducted last year.

But instead of hosting accounts worth six or seven figures, as do many DAFs, Daffy charges users $3 a month to run an account on the platform with no minimum balance and, at the beginning, a minimum donation amount of $20 to one of the 1.5 million nonprofits supported by the service.

But one Jewish early adopter reached out to ask: Why not bump the minimum donation down to $18, so Jews can give the amount that represents chai, the Hebrew word for life?

“It suddenly hit me that maybe we have a role to play… bringing people together around their traditions for giving,” Nash, Daffy’s CEO, told eJewishPhilanthropy. Reflecting on his personal experience of explaining Jewish traditions to non-Jewish guests at his children’s bar mitzvahs, Nash decided to take things up a notch.

Starting today, just ahead of the start of the High Holidays, Daffy users who donate to Jewish nonprofits will see buttons to give in multiples of $18, $180 and $1,800. In addition, the donation page will include an explanation for why Jews consider 18, whose alphanumeric value in Hebrew translates to “life,” an important number in gift-giving. And to make users feel instant gratification about donating (and, perhaps, encourage them to increase their donation) every press of the buttons will cause a cascade of rainbow chai bubbles to decorate the screen.

“For the Jewish members… [it will] help them give in a more authentic way and kind of a fun way,” Nash said. “For our non-Jewish members, it’s fun to learn a little bit about giving, if they’re giving to a Jewish organization. We think that most of our members would appreciate our guidance on how they can give in a way that might seem more connected than it would otherwise.”

In hindsight, Nash said, the Jewish donation features are an obvious addition to Daffy, which grew out of Nash’s musings on how to make donating easier for people – inspired, in part, by the Jewish day school his children attend in Palo Alto, Calif. Every Friday, students bring some change in as tzedakah, and once a semester they vote on which local organization to give the money to.

“It’s just a very wonderful way to bring giving into kids’ lives,” Nash said. “I’m always fascinated with the idea of, what do we teach our kids to do that we don’t do?”

Drawing on his career in finance and tech (he has worked at LinkedIn and was the CEO of Wealthfront, an investment app), as well as his experience on the board of Palo Alto’s  Oshman Family Jewish Community Center, Nash decided that more people should be able to use DAFs.

Through Daffy, Nash hopes to narrow what he calls the “generosity gap,” the difference between how much people want to give, and how much they end up giving. When Nash researched why donors give less than they intend to, he found that “in general, the issue just seemed to be that people are busy,” he wrote in a post on Daffy’s website. “You name it, but people just don’t seem to find the time to give what they believe they should give.”

Building Daffy to cater to and explain Jewish giving is one way of lowering those barriers.“It’s not just about religion, I think there are all different communities, different cultures that give in different ways,” Nash said. “They give [at] different times of the year… and I think one of the exciting things about having a platform for giving like this, is we can actually put that into the product.”

One user wanted to give to a different Islamic charity for every day of Ramadan, while some Christian users are asking for Daffy to help them calculate and give 10% of their income so they can fulfill the biblical custom of tithing. Nash plans for Daffy to integrate those giving habits into the platform in the same explicit way Jewish giving is now built in.

“In Jewish tradition, like a lot of religious and cultural traditions, this idea of giving as, not being something you do in response to being asked, but giving being something you make a part of your life, I think is a very fundamental one,” Nash said. “We really think that if we can get… millions of people to put money aside proactively for charity on a regular basis, it’ll really change the way that giving works. And I think it will be healthier and better for the people involved.”