A light unto the nations

Upon attending the recent 125th anniversary celebration of the First Zionist Congress in Basel, Switzerland, was striking to be in the same place that helped transform what was just a dream in August 1897 into an expanding and evolving reality in August 2022.

I first visited Israel in the early days of the modern State’s history. What were orange groves in farms back then are now high-tech parks and high-rise buildings. Today, it is astonishing to witness the fruits of the labor that began in Basel. 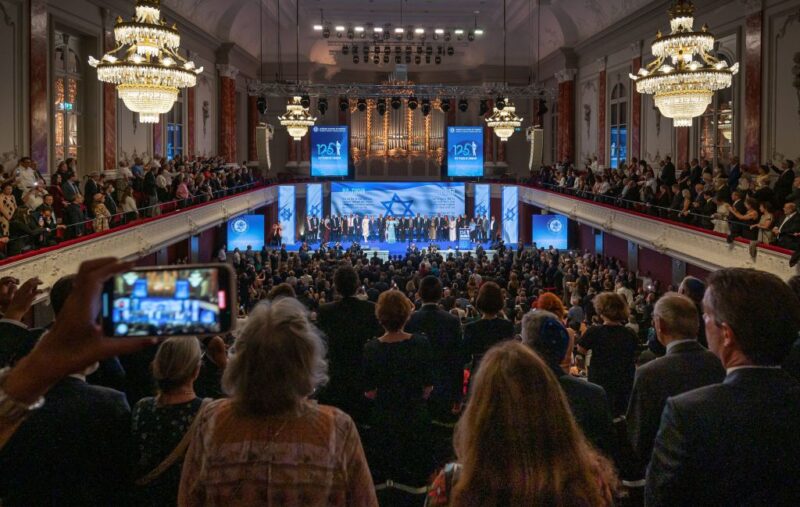 The anniversary also serves as a powerful reminder of the motivation behind my ongoing lay leadership journey in the Jewish community. As the son of Holocaust survivors, there is one particularly powerful belief that is part of my personal wiring: If there had been a State of Israel when my parents were children, many of my family members who were killed in the Holocaust would have lived. That is why it is so important to protect the modern Jewish state — and not only to protect it through security, but also to strengthen the state and the Jewish people as a whole through cultivating connections to Israel. And Jewish leadership is the vehicle for achieving these essential outcomes.

At its core, Jewish leadership is about strengthening the Jewish collective, a priority that is arguably as important as ever in today’s global environment for the Jewish people. We can most effectively strengthen the Jewish collective by reaching every Jew, creating both a place for them in the community and a connection with Israel. That is what The Jewish Agency for Israel, where I recently assumed the role of chairman of the board of governors, is all about.

Reaching every Jew means providing a lifeline to Jews who are in crisis, from Ukraine to Ethiopia and beyond. The Jewish Agency has carried out this work for more than 90 years; we have the know-how and infrastructure on the ground, around the world and in Israel, to effectively respond to emergencies and to always be there.

For Israeli Jews and world Jewry, it is crucial that we connect with each other and understand each other — particularly after we lost so much of the Israel travel opportunities in our community during the pandemic. Now is the time to lean back into Israel experiences in a big way, to foster mutual understanding between Israeli and world Jewry. The Jewish Agency is the leader in the Israel experience arena of both the short-term and long-term perspectives, from its support of Birthright to Masa Israel Journey and beyond.

We also cultivate these connections through our shlichim — Israeli emissaries who provide a living connection to Israel by promoting Israeli experiences, facilitating Jewish social activism, and speaking authentically about faith and culture. These emissaries enable North American Jews to develop genuine relationships with the Israeli people, by working in settings including Jewish communities and their institutions, college campuses (through The Jewish Agency Israel Fellows in partnership with Hillel International), and during their gap years before army service (through the ShinShinim program).

Partnership2Gether (P2G) and other Jewish Agency programs also advance this mission, with P2G providing a network for the promotion, empowerment, and development of deep connections between Jewish communities in Israel and worldwide. I poignantly experienced these connections firsthand in 2018 when, as part of the Jewish Federation of Greater MetroWest NJ’s P2G partnership with Israeli communities in the southern Negev region, I participated in the first-ever direct train ride from Jerusalem to the Negev.

Now is the time for these programs to be strengthened and expanded, particularly because of how the pandemic amplified the distance between Israelis and North American Jews. Today, the world’s two largest Jewish communities must connect and reconnect with each other through authentic experiences such as The Jewish Agency’s initiatives.

It is also of paramount importance that we reach members of the younger generation as part of this work to forge connections between Israel and world Jewry — that we help them find their place in the Jewish community. Young people are typically exposed to abundant traditional media and social media, much of it misinformed or biased. Compared to their predecessors, they also have a very different sense of what Israel is or what being Jewish means to them personally. They do not have enough knowledge of who we are, and therefore we need to help them see the real story and learn the real facts about Israel.

Many young people have not been to Israel, and those who have been there are better informed as well as more connected with their Jewish identity and with Israel. That is why The Jewish Agency brings them there for Israel experiences.

Additionally, many young people are exposed to anti-Israel and antisemitic rhetoric — and we need to better equip our next generation to understand the history of Israel and our connection to the land, and the importance of having that foundation be strong and to be able to continue as a Jewish people.

My personal experiences, from past to present, powerfully encapsulate this vision for Jewish leadership.

In the early 1990s, I visited a Jewish Agency summer camp in the former Soviet Union as part of a delegation from The Jewish Federations of North America’s Young Leadership Cabinet. I saw young people who once had no idea they were even Jewish, or perhaps had only a small trace of awareness, singing songs like Hatikvah. Today, The Jewish Agency continues to provide Jewish life for campers just like them. It is something that every young Jewish person deserves.

Three decades later, my experience in Basel this August has underscored how it is time to embrace Zionism as a positive force in the world. Zionism allows the Jewish people to celebrate our culture and history, and to be a force for good on the global stage. Jewish peoplehood with Israel at its center is something to be celebrated, of course not vilified. Our people are a light unto the nations. It is important to take a pause at historic moments such as the First Zionist Congress anniversary in order to celebrate who we are.

The Jewish Agency is the ultimate table where the Jewish people sit, and it has filled that role since before the establishment of the State of Israel. As I take my next step as board of governors chairman, I am energized by the opportunity to meet with Jews from all over the world and to see Jewish communities grow and thrive in the face of today’s challenges. And it is both comforting and inspiring to know as Jews across the globe face many challenges, the power of our collective has always been the source of our strength and continuity.

Mark Wilf is chairman of the board of governors of The Jewish Agency for Israel.