When I first became a congregational rabbi, I discovered that many people in my community had no experience attending a shiva minyan. We began educating people about the power of this gathering following the funeral of a close loved one. What we discovered was that every time someone had a significant loss and experienced the soul comfort of a shiva gathering, they became committed to and strong advocates for shiva gatherings for others.

Growing up in an observant Jewish community, attending a shiva gathering was not an unusual occurrence. When I first became a congregational rabbi, I discovered that many people in my community had no experience attending a shiva minyan. We began educating people about the power of this gathering following the funeral of a close loved one. What we discovered was that every time someone had a significant loss and experienced the soul comfort of a shiva gathering, they became committed to and strong advocates for shiva gatherings for others. Now, 30 years later, my community understands the sacredness and the power of this essential communal support. And still, I often feel that once the evening prayer service portion of the shiva is concluded – and this always includes more storytelling about the deceased than prayer – people tend to revert to circles of small talk and the sacred container is compromised. 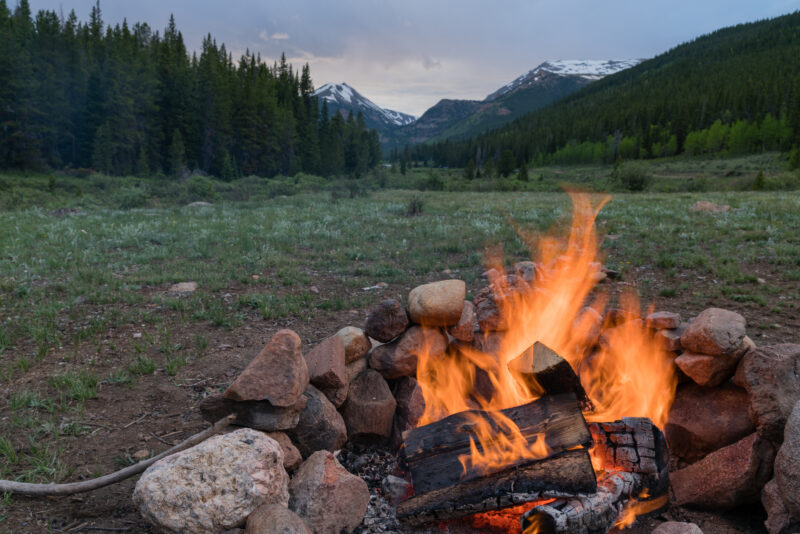 Recently, I was invited to attend a shiva gathering for the father of my dear friend and colleague, Rabbi Zelig Golden, who is the founder and executive director of Wilderness Torah. Zelig told me that the shiva was going to be at his lovely, forested home in Sonoma County in Northern California, and in typical Wilderness Torah tradition, it was going to be held outside in nature around a sacred fire.

Sacred Fires are often at the center of many Wilderness Torah gatherings. The ritual reconnects our people to an ancient, earth-based Judaism, that featured sacred fire on the altar of both the mishkan (portable sanctuary in the wilderness) and the First and Second Temples in Jerusalem. At Wilderness Torah events, like Passover in the Desert, the sacred fire is kindled at the beginning of the five-day gathering and is tended by trained fire keepers, 24 hours a day, until participants ceremonially extinguish the fire at a morning service that concludes the gathering. People can sit by the fire to pray or meditate and it provides a continual sacred presence to the holiday celebration.

The fire keeper then kindled the sacred fire and everyone sat around it. Zelig’s wife, Rachel, instructed people about the traditions around the sacred fire. We were to leave a portal in the circle where people could enter and exit. We were always to circumambulate — move around the fire in a clockwise direction. This is a centering and bonding practice, a way to acknowledge the sacred by circumscribing it with one’s own body. We were also invited to offer cedar needles into the fire if we wanted to embody a silent prayer of the heart and connect to the sacred fire at any time.

Importantly, there was to be no small talk around the sacred fire, a big ask given that there were several children who were a part of this fully intergenerational shiva circle.

After some silence and a few prayerful songs, Zelig began by sharing some stories about his father, Michael, z”l – may his memory be a blessing.  Throughout the evening and into the night, people came and went. Stories were shared about Michael, and deep truths were told. The children present were allowed to be children and were taken to bed by parents when they were tired. People reflected on some of the deep stories that were told and the sacred container was never compromised.

The fire resonated with the divinity that our tradition teaches us that Moshe Rabbeinu experienced at the bush that burned but was not consumed. While the wood that was nourishing our sacred fire was certainly consumed, the power of the fire was fully alive with holiness and was an other-worldly presence that invited all of us at the shiva into ‘timeless time.’ The fire was tended throughout and often entered the conversation with crackles and sparks. The fire provided what is often missing at shiva gatherings – a sacred center and focus – a sense of the divine in the same way that the light of the menorah lit up the night when it poured forth its light from within the mishkan for our people on their journey through the wilderness.

At one point during the shiva, Zelig, who was doing grieving/healing work in real time in our circle, acknowledged that he felt invited by the sacred fire to offer into it feelings of resentment, anger, ingratitude that he didn’t need to carry forward. Zelig felt safe to speak of more challenging experiences and feelings and he turned them into offerings that were consumed by the fire. He felt permission in this sacred space to connect more deeply to the feelings that created a living bond to his father’s soul. It was enormously powerful to witness and support this deep process.

There was a primal quality to the gathering. It felt right. It created a deep sense of holiness. We chanted El Maleh Rachamim – our people’s prayer that reminds us that God is the Source of all compassion. We set an intention to have compassion for the memory of the loved one who died, as well as to practice compassion for ourselves.

At the appropriate time we stood to offer the Mourner’s Kaddish, our people’s mysterious prayer of affirmation in the face of death. Somehow, the Kaddish had a different quality around the sacred fire, with its light dancing off our faces as we affirmed the possibility of a new relationship with those who have left this plane of existence.

We left after about five hours, and the fire was tended through the night. We all felt that we had experienced a completely different kind of shiva gathering. It felt ancient and alive. We experienced the healing of grief in real time, together, around the fire. Shiva: Perhaps how it was meant to be, and how it might be experienced again.