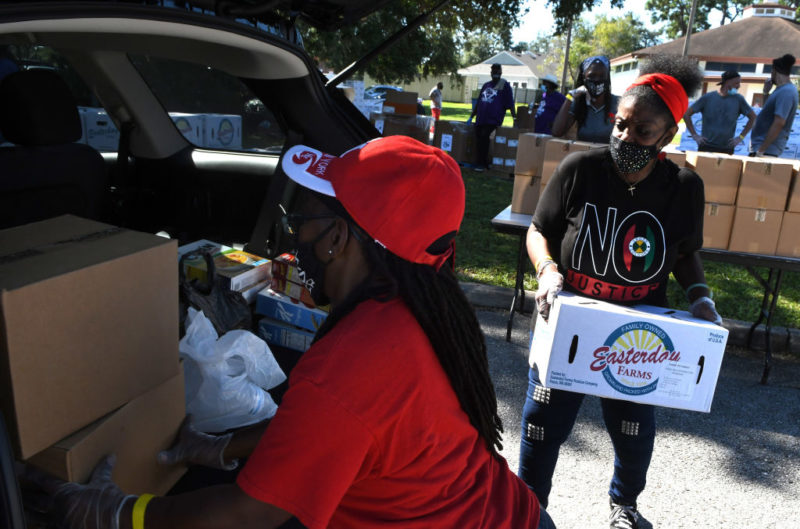 Charitable giving in the United States rose 3.8% to a record high $471.4 billion in 2020, fueled by an increase in grants by foundations and wealthy individuals who benefited from a soaring stock market. At the same time, donations to religious congregations were flat from the prior year, according to estimates from the latest report from Giving USA Foundation and the Indiana University Lilly Family School of Philanthropy.

While giving declined as the economy contracted during the Great Recession of 2008 recession, a similar decline did not happen in 2020, despite the fact that the country’s gross domestic product shrank by 3.5%. Total giving in 2020 was 2.3% of the $20.9 trillion GDP.

“Foundations give out of their assets, and that’s linked with the performance of the financial markets,” Una Osili, associate dean for research at international programs at the Lilly Family School of Philanthropy, said on a conference call about the report on Tuesday.

The Jewish Funders Network (JFN), a service organization for foundations, federations and individuals, reported that 72% of its members gave more in 2020 than in previous years, and 57% of those members plan to maintain those higher giving levels, said the group’s CEO, Andres Spokoiny. Slightly more than half of the membership started giving in new issue areas during the pandemic, he added.

“Not only was more money given, but the giving was smarter and more efficient,” he said. “Funders partnered more and eliminated bureaucratic burdens on grantees.”

The largest share of giving consistently comes from individuals, who contributed $324.1 billion, or 68% of the total, in 2020. However, if MacKenzie Scott’s record-setting $5.8 billion in donations are removed from that figure, giving from individuals would have fallen by almost 1%, according to the Chronicle of Philanthropy. Today, Scott announced gifts of $2.74 billion, including to two Jewish organizations, Repair the World and HIAS.

“It was a difficult economic year for many. Overall, giving grew, and those who had the financial resources stepped up, but you need to unpack those numbers and look at the unemployment rate, and the decline in personal consumption,” Osili said in an interview with eJewishPhilanthropy.

At $131.1 billion, “religion,” which includes houses of worship, is the largest charitable category in Giving USA’s report, though giving was essentially flat in 2020, rising 1%.

Americans are increasingly unlikely to affiliate with a religion, and attendance rates at worship services fell during the pandemic due to lockdown orders, causing support for congregations to dwindle further, said Laura MacDonald, chair of the Giving USA Foundation.

“The survey reflects some of the challenges of what’s going on in the Jewish community in terms of affiliation and connection to organized Jewish life,” he said, adding that many synagogues were able to get through the year despite the closure of their buildings thanks to the federal government’s Paycheck Protection Program. “Did synagogues have great years? No. Did they survive? Yes.”

The economic difficulties faced by individuals also played a role in the amount of giving to religious institutions during the pandemic, JFN’s Spokoiny said.

“Most giving to religious organizations is done by individuals and not foundations,” he pointed out. “Middle-class families suffered greatly during the pandemic.”

Donations to the category that includes Jewish federations in addition to United Ways — “public-society benefit” groups — rose 14.3% to $48 billion in 2020.

“Federations not only received significant donations, they were able to give back to their communities and respond to crises, whether that was COVID, racial equity or local needs such as the California wildfires,” Osili said.

The arts, culture and humanities category suffered the sharpest decline in giving, falling 7.5% to $19.5 billion.

“Philanthropic support of the Jewish arts and culture ecosystem was already inadequate before the pandemic hit. COVID’s economic impact made matters much worse,” said Lou Cove, founder of CANVAS, a funder collaborative launched in 2019 under the auspices of JFN. He noted that some supporters, in addition to those who fund CANVAS, have made new investments in arts and culture, such as Steven Spielberg’s and Kate Capshaw’s Righteous Persons Foundation and the Maimonides Fund, supporters of the Jewish Story Partners film fund.

Americans gave $25.9 billion, an increase of 9.1%, to international affairs organizations, which includes those serving or based in Israel, Osili said.