A Jewish fund for artists creates a plague-themed Passover exhibit 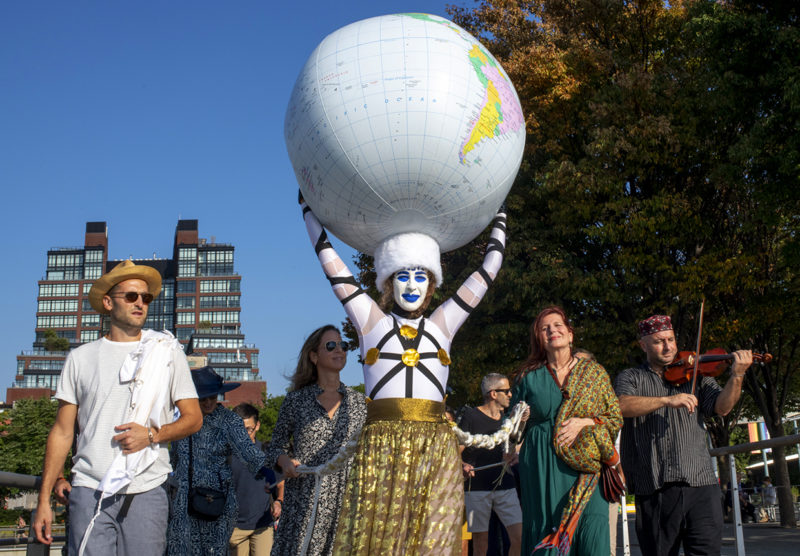 An eight-part video series about the Golem of the future in Boston.

In Baltimore, an audio installation that plays recordings of people who have lost loved ones to COVID-19.

These three artworks are part of a larger project — “Dwelling in a Time of Plagues” — commissioned by CANVAS, an arts-focused grantmaking body under the auspices of the Jewish Funders Network and unveiled yesterday. On view in six locations and online, the initiative is a departure for CANVAS, whose mission is to fund artists, not to provide programming, said Eva Heinstein, a research fellow at the Jack, Joseph and Morton Mandel Foundation in Cleveland, which joined CANVAS in late 2020.

“The ‘Dwellings’ project is really an effort to respond to the moment, to not be in a vacuum and making grants as if the pandemic wasn’t happening,” she said.

“Dwelling in a Time of Plagues” also serves another purpose, Heinstein added, which is to help rebuild a community of Jewish artists and related professions, like curators and critics, which had been eroded by the closure of some key institutions over the last two decades and damaged further by the pandemic.

“Through doing, you build those relationships,” she said.

CANVAS was founded in 2019 by Lou Cove, a memoirist and fundraiser who has worked at the Yiddish Book Center and as an executive director of Reboot, another Jewish arts and culture nonprofit, and advised the Harold Grinspoon Foundation and the American Institute for Architects.

Both Heinstein and Cove said the early 2000s was the last time Jewish arts in the United States flourished with adequate funding. That era saw the birth of a nonprofit Jewish record label, JDub, and the Six Points Fellowship, which made grants of $40,000 over two years to emerging Jewish artists.

National arts funding also peaked in that period, said Ryan Stubbs, who directs research at the National Association of State Arts Agencies. In 2021, state arts agencies — an indicator of arts funding broadly — had a collective budget of $402.4 million, down 10% from a 2001 high point. The National Endowment for the Arts’ (NEA) budget hit its high in 1992, with $179.5 million.

The Six Points Fellowship closed after six years, in 2013, and so did its sponsor, the Foundation for Jewish Culture, which was founded in 1960 and became the community’s leading arts institution.

“The economic downturn of 2008 and the closure of the Foundation for Jewish Culture hollowed out the Jewish community’s arts infrastructure,” Heinstein said.

In the wake of the 2008 recession, Cove, through the Jewish cultural network he’d built up over the course of his career, started to sense new funder interest in the arts. Working with the Jewish Funders Network and the Righteous Persons Foundation, he commissioned two studies that revealed that not only did artists need support, but that the “hollowing out” of the field had made it difficult for interested funders to approach it.

Each supporter contributes between $150,000 and $300,000 a year, and the donors or their representatives along with a committee of artists and other professionals decide how to distribute the money, Heinstein said. The Mandel Foundation contributed $150,000 in 2021 and will do the same in 2022.

It made emergency grants in the early days of the pandemic to help replace income lost to the pandemic, when lockdowns forced theaters and music venues to cancel performances, for example.

Its most recent grant, announced yesterday, was $257,000 to The Forward, which publishes in both English and Yiddish; Hey Alma, a website targeted at Jewish female millennials; and Hyperallergic, a mainstream arts publication that covers Jewish culture. Cove declined to disclose the amount each grantee received.

“You don’t get a Renaissance without a few Medicis,” Cove said.