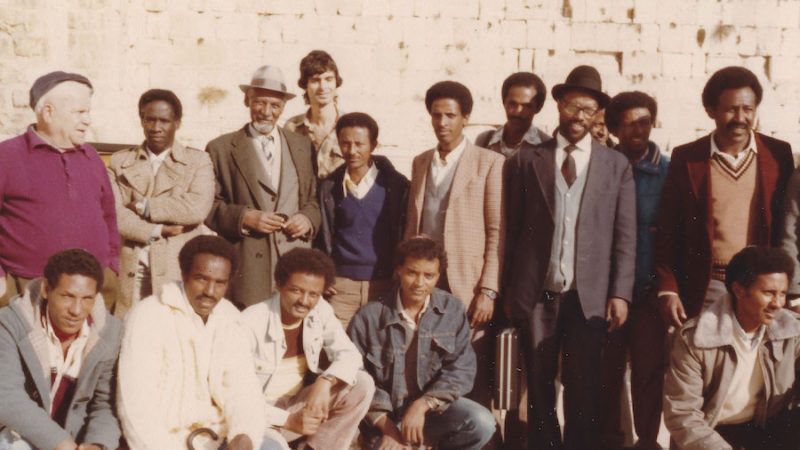 JSP’s sensibility is both eclectic and ambitious, say filmmaker Roberta Grossman, its producing director, and film festival programmer Caroline Libresco, its artistic director. Announced in April, the fund has awarded a total of $225,000 so far and aims to launch a $50 million endowment campaign by the end of three years that will ensure its survival in perpetuity.

“Jewish Story Partners will encompass the fullest range of histories, cultures and themes, and in so doing that, we will create a larger tent of belonging for Jews to see themselves on screen,” Libresco said.

Roberta Grossman: The National Foundation for Jewish Culture closed in 2014. They had supported film through the Lynn & Jules Kroll Fund for Jewish Documentary Film, and [Steven Spielberg and Kate Capshaw’s] Righteous Persons Foundation (RPF) was an investor in that fund, so when the foundation folded, there was $1 million from RPF in escrow. I said, “Let’s take that million and start a new organization.” But Rachel [Levin, then the executive director of RPF] is very grown-up and wanted to be more thoughtful. They engaged somebody to do a study of the field.

HC: What did you learn in that process?

RG: That there was a need. Caroline and I have suffered together [through] the trials of trying to raise money for Jewish film. Jewish foundations are often focused on education in a way that has a specific definition. Film foundations are progressive and tend to be focused on the larger social issues of the day. Both of those are totally valuable and there’s no criticism of either mission, but the funding of Jewish arts in general falls into a gap.

Caroline Libresco: We could talk for hours about the need for philanthropic money in independent filmmaking. It’s a specific sector of the filmmaking community — independent artists working outside of the studio system. We begin from the assumption and the belief that independent storytelling is crucial to our society at large. Out of independent storytelling comes the most extraordinary stories that otherwise wouldn’t get told. And then artists get to develop themselves in that arena, where they’re calling the shots, and then that’s a talent pipeline to Hollywood.

HC: Your average person might look at Hollywood, though, and see the free market financing a lot of Jewish stories.

CL: There’s been an incredible outpouring of Jewish culture recently, from “The Marvelous Mrs. Maisel” to “The Plot Against America” to “Shtisel.” But even that is not telling the full range of the Jewish story. Hollywood films do not rely on philanthropic monies. It’s a business, you invest your equity and you make more back in your return. That’s the business of movies and television. The economy of independent film is much more delicate. Some films hit in the marketplace but many more don’t, even though they might make a huge impact. We want to be able to take risks on stories that maybe aren’t for hundreds of millions of people, but they need to exist, and they need to be told. It’s akin to how we feel about opera and museums and ballet. Most of those institutions are lucky if even half of their budget is earned from ticket sales and merchandising.

HC: I wonder, then, why there hasn’t been more robust support for Jewish film before now?

RG: What we will be trying to do is working with funders in a way that feels safe and on-mission. I’ve had so many conversations with funders where they’ll say, “We gave $200,000 to this guy and the film never went anywhere.” Film is hard to give to without expertise. Here is the way I think of it: We are jumping into the confidence breach between filmmakers and funders. Funders are not dumb. Everyone knows film is one of the most powerful mechanisms. Film is a mechanism for Jewish identity, education and spirituality. We want to take most of the risk out of funding film. We will work with the filmmakers all the way through to distribution. That doesn’t mean every film will have the same trajectory. But I think that’s why [the] Maimonides Fund and the Jim Joseph Foundation have come in. They recognize that this is a powerful tool for connection.

CL: Also, outside the Jewish philanthropic world there’s been an increasing understanding of the value of film. There’s Jeff Skoll’s Participant Media, which partners with filmmakers to further his mission of social entrepreneurship. The Ford Foundation and the MacArthur Foundation support film. And individuals of high net worth are recognizing that their passions can be served through storytelling.

HC: There are high barriers to entry in the film industry. It seems like that could also be a challenge in terms of supporting the widest possible range of films. What is your thinking on that?

CL: We just opened our doors. At our launch, we announced support for 10 projects, and some of them could benefit from some extra support. But also, we are working in 2022 to announce a program that will enable people to incubate projects at earlier levels, people who are more in an emerging place. That’s a lab program for emerging filmmakers. We will be able to talk more about that in the future.

HC: I know part of what you’ll offer filmmakers in addition to financial support is your expertise. Do they all want that help?

CL: That continuum of support is really bespoke to each project. We ask them, what do they need, what do they want. Together, we represent nearly 40, 50 years of experience in this industry from different angles, and I think we feel really excited that we can offer that help. Most people are embracing it. The research is there. It can make a difference, that support, whether a film can accelerate or reach its potential. We’re not just check-writers.

HC: Are there any salient differences between raising money for independent film outside the Jewish world versus inside it?

CL: I was deeply involved in fundraising at [the] Sundance [Film Festival]. Structurally, it’s very similar. What’s different is that now we’re working with foundations that are if not wholly then largely focused on Jewish life, and we’re just getting to understand their point of view and how that colors the way they think about film. We’re not prescribing subjects or stories. Our vision is to listen to the artist and let them tell us what stories they want to make. There’s a very healthy tension between the philanthropists and that reality, since they have a clear mission, which they’ve defined, and for good reasons. It’s a very interesting and vital conversation to be having. At Sundance, it was widely understood that Sundance didn’t predetermine what it would look at.

RG: It’s our goal to bring funders and filmmakers together. We’re planning on having learning sessions with our funders covering all aspects of independent filmmaking: How do you develop an idea? What is an impact campaign? Maimonides Fund said they wanted to get involved with us to learn more about the field. As we expand our capacity, we want to create programs that really encourage the use of film in Jewish education. This is the medium of our time.