Called a “TzedakaThon,” the event was put on by Lost Tribe, a Jewish group that aims to engage teens through virtual spaces. 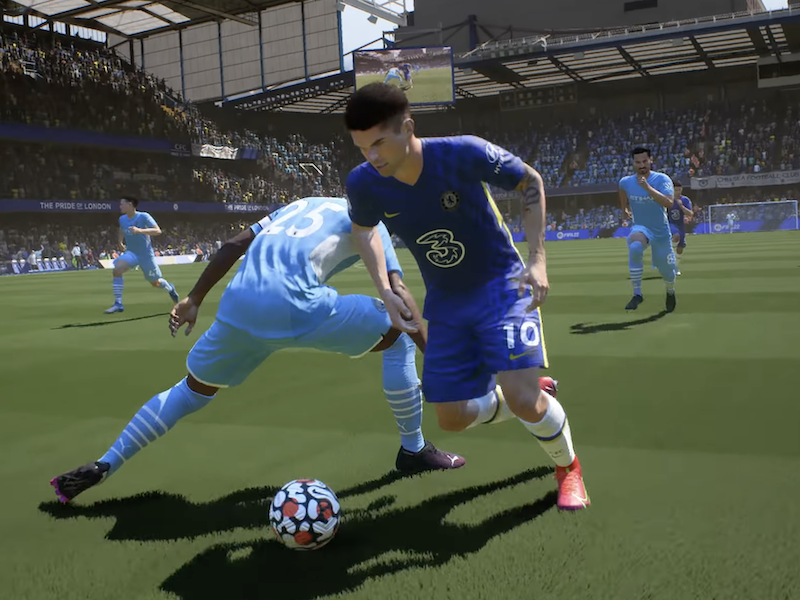 An image of FIFA 22, a popular soccer video game.

Sunday saw a somewhat unusual Jewish fundraiser: While the event raised money on behalf of a now-popular cause — aid to Ukraine — it was held entirely via a 12-hour livestream; guests included an Israeli who streams a feed of himself playing esports in addition to an Olympic gold medalist; and the dollar goal was small: just $1,200.

The reason for the modest number and unorthodox roster is that the fundraiser’s target audience was Jews ages 12 to 18. Called a “TzedakaThon,” the event was put on by Lost Tribe, a Jewish group that aims to engage teens through esports, social media and other virtual spaces. The goal of the fundraiser was to teach about the Jewish value of charity and create a culture of giving.

“I don’t want to say it’s not a big number, because on one hand, it’s a huge number, when you’re talking about kids [who] aren’t engaged in the community,” said Lenny Silberman, Lost Tribe’s founder and CEO. “You know, it’s a dollar here, it’s $5 there, it’s $10, whatever it should be. It adds up. Changing culture takes time … and we’re very excited that we’re going to be able to donate whatever it is.”

Lost Tribe has engaged more than 61,000 teens since it launched in February 2018. Silberman said his primary goal is to engage the large percentage of Jewish Gen-Zers who have stepped away from Jewish life after their b’nai mitzvah.

The organization went all-virtual when COVID-19 hit, and now has nearly 24,000 followers on TikTok. The group engages Jewish teens on various social media platforms, including Twitch and Discord, which are both popular with gamers. Lost Tribe has its own Discord channel where 600 teens log in daily to hang out with each other online. It also offers Jewish education through experiences on the popular game Minecraft, and hosts regular events on Jewish holidays.

At a Lost Tribe Hanukkah event, Silberman said that more than 10% of the kids watching said they would not have lit a Hanukkiah without participating.

“We’ll meet teens where they’re at, and then we’re going to bring Jewish to them,” Silberman said. “This is where kids are at. They enjoy the content, whatever the content might be.”

The TzedakaThon ran on Sunday from 10 a.m. to 10 p.m. Eastern Daylight Time, raising money for Ukraine relief via the Jewish National Fund. Its headliners included Jewish TikTok comedians Kyle Gordon and Eitan Levine, as well as Snacksss — an Israeli gamer with an average of 10,000 views per stream — who played FIFA 22, a soccer video game.

Attendees tuned in to hear from four-time Olympic gold-medal swimmer Lenny Krayzelburg, who came from Ukraine to the U.S. when he was 8, and watched a challah-making demo by Challah Back Girls, four sisters who bake and sell challah to raise money for racial justice.

Participants also had opportunities to win devices such as an Xbox, PS5, Oculus or Nintendo Switch, along with other prizes.

Lost Tribe’s all-virtual format allows young adults to connect across borders and time zones, something Silberman saw during the May 2021 conflict between Israel and Hamas, when American and Israeli teens gathered in Lost Tribe’s spaces to discuss the violence.

“You have all of these kids from America saying, ‘What’s a bomb shelter? Why do you have a shelter in your house?’” he said. “And I’m sitting there and I’m getting goosebumps. And I’m saying, ‘Oh my God. This is friendship.’”

Silberman has worked at Jewish organizations for decades, but he says the secret to Lost Tribe’s success is his team of some eight Gen-Z Staff and 15 interns between the ages of 14 and 22.

“I think this is the hardest I’ve worked and the most fun that I’ve ever had in 44-plus years,” Silberman said.