Bamah, a program launching this coming academic year, will bring Israeli artists to American campuses and their surrounding Jewish communities. 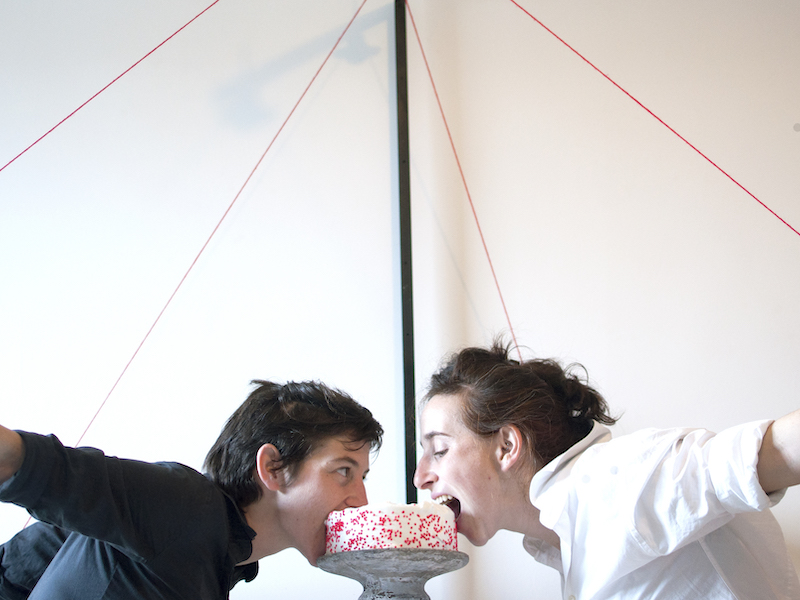 The Bible relates that when the Jewish people wandered in the desert, they were fed by manna, the miraculous sustenance that rained down upon their camp. Somewhat more recently, a group of people at an art show looked up to see potato flakes floating through the air.

The guests walked through the drizzle of flakes, this manna shower, listening to how it sounded, smelling the aromas in the air, feeling the textures and tasting the flakes — seasoned with flavors from various Israeli dishes — as they landed in their mouths. The program was one of many sensory immersions blending food and movement produced by artists Carmel Bar and Michal Evyatar, who together are known as Studio Mela.

That’s exactly the kind of program that the people behind Bamah, a new nonprofit founded to spread  Israeli arts and culture, want to cultivate.

“There are world-class artists that are creating work in Israel,” Flo Low, Bamah’s founding director, told eJewishPhilanthropy. “We want to provide a different way to learn about, connect with, and engage with Israel… Bamah’s mission is to design meaningful experiences that harness the power of Israeli culture to inspire and connect people.”

Bamah, which is bringing three Israeli artists to the U.S. starting this coming academic year, is a successor to The Israel Institute’s Visiting Artists Program – founded with the help of the Charles and Lynn Schusterman Family Philanthropies – which has brought more than 100 Israeli artists in film, TV, theater, dance, music, visual arts and literature to North America over the last 12 years.

“Our target audience is the community and the artist,” Low said, “We are interested in the role of arts-driven dialogue and cultural exchange in enhancing mutual understanding. For the artist: how does the experience of living and teaching in the U.S. change their perspective and inform their work during and beyond the residency? In creating work in and for the community, Bamah aims to have an impact beyond campus, as well as in and beyond the Jewish community.”

The first public Bamah event is scheduled for May 2023, timed to Israel’s 75th birthday, and will feature Studio Mela’s Evyatar and Bar. The artists will develop an immersive  food event that will tour other East Coast communities; teach at two area universities; and participate in the Boston area’s Israel Restaurant Week.

“Most people don’t realize how diverse Israel really is, representing 70 different cultures, from Russian Jews who fled the former USSR and Ethiopian Jews who literally walked 2,500 miles to get to Israel, to Moroccan Jews who came in the 1950s and… many others who flocked to Israel as a haven and a homeland,”  said Laura Conrad Mandel, founder of JArts, a Boston Jewish arts organization, who hopes the program “exposes people to new elements of Israel that maybe they haven’t understood before and give[s] a little color and nuance and enthusiasm.”

Bamah is also centered on “dialogue and exchange” between students and Israeli artists, said Bamah board member Shai Korman. Mandel hopes that the students, who will take part in creating the artists’ projects, will forge “a personal connection, a familial connection,” that strengthens their ties to Israeli and Jewish culture.

“[The artists will] be coming as ambassadors of their field and the country where they live, but they’ll also be absorbing things from the community that they’re in. We are hoping for a real symbiosis,” Korman said. “They’re going to be bestowing their knowledge on the students, but they’re also going to be creating while they are here.”

Israeli director Ruth Kanner, who was in residence at the drama division of The Juilliard School in Spring 2020, said that the Visiting Israeli Artists Program exposed American students to her practice of Storytelling Theater. Collaborating with students, she said, was an “extremely rewarding process” in which she “learned about trends in American theater and the way local artists express themselves, so it was a fascinating intercultural dialogue.”

Jewish arts funding is notoriously scarce, but the pandemic seems to have boosted investment in the arts sector. In 2020, CANVAS, a partnership of five Jewish foundations working with Jewish Funders Network, awarded grants to five Jewish arts and culture networks totalling more than $900,000. In April 2021, the New Israel Fund (NIF) announced its first-ever batch of $42,000 in grants to 14 individual Israeli artists.

While the Israel Institute will no longer be engaging in arts programming, it remains  “deeply invested in Bamah,” said Low; in addition to being a funder of Bamah, it has  issued a challenge grant to inspire additional donors to support Bamah’s work.

“We believe that the arts need their own platform, one that is built to the strengths and uniqueness of the art,” Ariel Roth, executive director of The Israel Institute, told eJP, “one that continues bringing artists to campuses but that showcases them in places and ways outside of the confines of what a campus residency allows,” he said.

Past artists-in-residence have also built relationships with local community members, and many continue to conduct classes on Zoom and receive invitations to come back to produce in-person workshops, Low said.

“When I talk to artists at the end of their residency, they’re speaking differently about their work,” Low said. “This arts dialogue is ongoing and continues to influence both communities and the mutual understanding of both communities.”

Low is no newcomer to the Israeli arts scene: she started as associate director of arts programs at the Israel Institute and assumed leadership of the program when project founder Marge Goldwater retired in 2018. Over her years in Yale School of Drama’s conservatory program, where she earned her MFA in theater management, Low was the full-time company manager of Yale Repertory Theatre, overseeing more than 15 productions and special events, and associate managing director of the Yale School of Drama. She also brought her experiences with Israeli artists into her work at Yale, engaging Inbal Pinto and Avshalom Pollak Dance Company’s for performances at Yale Repertory Theatre, which Low directed.

While there are a lot of cultural dialogue and exchange programs, rarely is art the central tool, Low said. “One of the things that excites me about Bamah is that it unites my passion for arts for culture, and for the storytelling and relationship building that result from arts and culture experiences to bring people together.”

Bamah officially takes the reins of the Visiting Artists Program beginning in July. This coming academic year, in addition to Studio Mela in the Boston area, details are being finalized for an Israeli choreographer to be in San Jose, California. Israeli Ethiopian filmmaker Aalam-Warqe Davidian, whose 2018 film “Fig Tree” was nominated for Best Picture in Israel’s version of the Oscars, will be in  Atlanta, Georgia.

“We’re looking to reach more people that are excited by the vision and the opportunity to bring the best of Israeli culture to their communities,” she said.