A crowdfunding campaign hopes to preserve the shoes of 8,000 children killed in the Holocaust

The campaign also hopes to give a new generation a tangible way to remember the Holocaust. 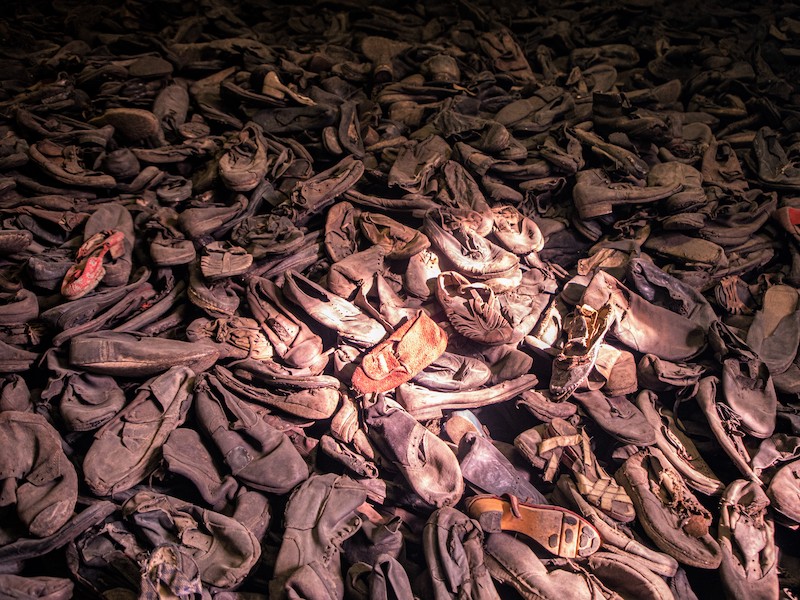 A pile of victims' shoes at Auschwitz.

It’s one of the most haunting images of the Holocaust: thousands of beaten-up shoes, heaped in a mountainous pile — nearly every pair having belonged to a person who didn’t make it out alive.

More than 200,000 children were killed at Auschwitz, and the Auschwitz Museum says the shoes — which are one of the only remnants of their short lives — are at risk of deterioration. Now, a crowdfunding campaign seeks to finance the shoes’ conservation and, its organizers hope, give a new generation a tangible way to remember the Holocaust.

“They’ve deteriorated now to a point that if they are not restored, they will disintegrate altogether and we will lose them as evidence of history,” Phyllis Greenberg Heideman, president of the International March of the Living, told eJewishPhilanthropy. “We are rescuing the last piece of evidence that these children even ever lived.”

The campaign began in September and, so far, has raised roughly $250,000. Along with the March of the Living, it’s being co-organized by the Auschwitz Museum at the site of the former camp and the Auschwitz-Birkenau Foundation, and Heideman expects it to last two years. Initially, the goal is to conserve 8,000 shoes that are especially at risk, at a cost of approximately $50 to $100 per shoe, with the average trending toward the higher end of that range. The work will be done by specialists at the museum.

For the March of the Living, an annual educational trip to Auschwitz-Birkenau that has brought more than 300,000 people — many of them teens — to the concentration camp, the fundraising campaign is also a way to engage young people in Holocaust remembrance. Heideman said that the campaign’s organizers intentionally did not seek the backing of a foundation or corporation, so that ordinary people could feel a sense of investment in the initiative.

The minimum donation to the campaign, which is titled “From Soul to Sole,” is $18. A menu of possible donations shows pictures of the shoes along with options such as “A pair for Avraham” ($180) or “Heeling Adam” ($500).

“This is a real way for people to become actively involved in saving history,” said Heideman, who was appointed by President George W. Bush to the United States Holocaust Memorial Council during his administration. “We want the people, the general population. We can always go to major corporations and, I’m sure, raise the money we want. I would much rather engage the general population, engage those with a desire to keep memory alive, even if it’s one by one, five by five.”

Heideman has seen the shoes up close and handled them with protective gloves, and said that many are torn, cracked and discolored. Some have the children’s names written in them, she said, and some look like they were ripped off of the children’s feet. She added that many children came wearing boots, regardless of the season, because parents hoped that giving their children durable, long-lasting shoes would increase their chances of survival.

Repairing the shoes, she added, is particularly complex because they were constructed some 80 years ago, with different materials than today’s shoes.

“It’s not just a matter of five minutes of the shoemaker, it’s really a delicate, delicate expertise,” she said. “We’re talking about the man-, woman-hours to do it, the tools, the special little brushes I witnessed and the little gloves that have to be used. And there are special oils — and special thread has to be purchased if the sole is detached from the body of the shoe.”

Heideman hopes that this project will serve as a testament to the victims and survivors of the Holocaust as the population of survivors is rapidly shrinking. Years from now, the shoes, she said, will serve as a tangible reminder of what occurred.

“We are saving and preserving historical evidence so that when there are no more survivors alive, and when our generation itself passes and the younger generation is removed so far from the events of the Holocaust that perhaps those events could be forgotten, we will have this proof, we will have this initiative,” she said. “And these shoes will live to actually tell the story of the children who wore them.”