A conspiracy of hope in San Francisco

What exactly is GLIDE? And what is it like being an out and proud rabbi, a practicing Jew in this least traditional of rabbinic roles? 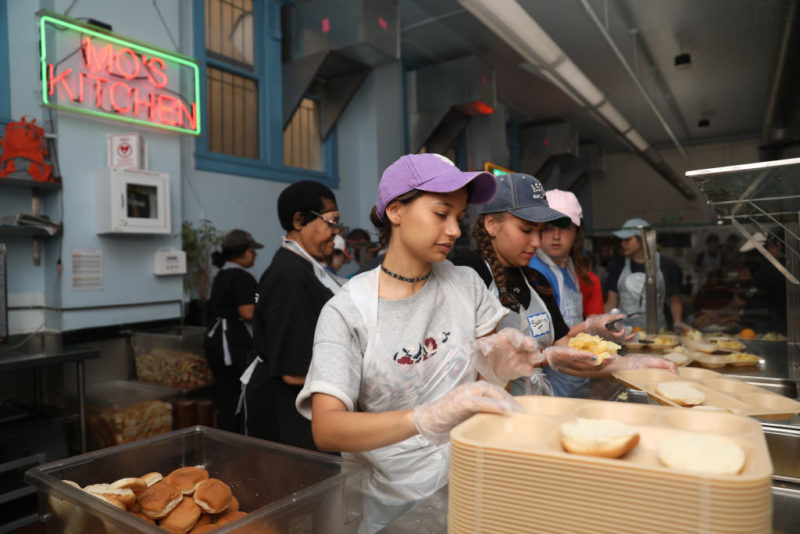 “…After that, you shall be called City of Righteousness, Faithful City…”

Every Friday morning, a group of volunteers from The Kitchen (a congregation founded by my wife, Rabbi Noa Kushner) bakes 100 plus challahs in the GLIDE basement. Before we distribute this hot Jewish-Sabbath bread to a largely non-Jewish staff and hungry clientele, volunteers and staff gather in a circle in a small storage room. Before we recite the motzi in Hebrew and English (and occasionally Arabic), I invite all gathered (Jews and non-Jews) to reflect on the week that is ending and to share an idea about something that will bring them life over Shabbat/the weekend (think of it as an interfaith pre-shabbes ritual). Following the blessing, Glide staff and newbies are first in line to tear off a piece of hot challah and to smother it with more butter than they think they deserve (Glide halacha). The volunteers then fan out across the building, distributing piping hot challahs to an insanely grateful staff. These are thirty of the most reliably holy minutes in my week.

Before arriving at Glide in 2017, I worked as a rabbi at synagogues in Bay Area suburbs for 18 years. Most recently, I worked across the Golden Gate Bridge in Marin County, an astoundingly beautiful, exorbitantly expensive, quiet and quaint place that, it should be noted, is 85% Caucasian. The first five weeks that I worked at Glide, I commuted from rich, white America to the Tenderloin neighborhood in San Francisco. When I parked my minivan on Ellis Street, my sheltered soul was not prepared for what I would witness: Dozens of people on the street, some relieving themselves between parked cars, others injecting drugs freely on the street and some face down on the sidewalk, me, truly not knowing if some of them were alive or dead. On top of this, I couldn’t help but notice that the people on the street were predominantly poor people of color (While SF is 5% African-American, 37% of unsheltered residents are Black and over 50% of people in the county jail are Black). Bryan Stevenson, founder of the Equal Justice Initiative, wrote, “Slavery didn’t end in 1865, it just evolved.” It evolved into mass incarceration and mass poverty of people of color in places like the Tenderloin.

What exactly is Glide? And what is it like being an out and proud rabbi, a practicing Jew in this least traditional of rabbinic roles? Glide is two radically holy entities under one sacred canopy. Firstly, Glide is a historically Black church with a 50-member gospel-ensemble and a seven-part funk band that collectively anchor stratospherically sacred worship (if you’ve been to Sunday Celebration, you know EXACTLY what I’m talking about). It should be noted that when Reverend Cecil Williams (we just celebrated his 92nd birthday…think SF Justice-Yoda) came to Glide 60 years ago, the first thing he did was to take The Cross off the wall in the church, pronouncing, ‘this here sanctuary will be a house of prayer for all peoples.’

Glide is also a foundation which oversees a panoply of righteous, life-saving work. I work for the GLIDE Foundation, not the church…although I preach regularly in the church. Glide serves 800,000 hot meals to hungry humans every year. We distribute 1.5 million clean needles to people wrestling with addiction (more on that later). Glide has a women’s center that helps women heal from trauma, an “alternative to incarceration” program and a program that helps men and women unlearn violence. In short, Glide is a highrise holy of holies, a venerable redemption factory staffed by a compassionate army of tzadikim, who love, and serve and learn from the desperately poor in this city that is also home to more billionaires per capita than any city on the planet.

I share an office and partner professionally with a brilliant and luminous, 71 year-old non-Jewish Black woman named Isoke Femi, Glide’s ‘Maven for Transformative Learning’ (she claimed that title long before I showed up). Our shared work falls into four intersecting categories. Firstly, we teach all the time, using Glide and the Tenderloin as a justice laboratory and classroom. We teach foundations, corporations, synagogues, summer camps…The Kitchen’s K-12 Freedom School meets regularly at Glide, learning Torah, then living Torah. Secondly, we train police officers and district attorneys from around the country in a program we call “An Officer and a Mensch,” teaching them how to de-escalate situations non-violently and to be more compassionate in their work. Thirdly, we run annual justice pilgrimages to the equal justice initiative’s Legacy Museum and National Memorial for Peace and Justice in Montgomery, Alabama. We were there last in March 2020.

As COVID was cresting over America, we had 110 people on the ground with us in Alabama, looking head-on at the birth story, evolution and metasticization of systemic racism and racial terrorism in America. That group included 25 Glide frontline workers (many of whom came out of incarceration and/or did not graduate high school), 25 senior leaders from the University of California San Francisco (UCSF) all of whom took 3 extra days to look at inequities in health care, and 30+ members from The Kitchen. Lastly, Isoke and I are working with UCSF (the second largest company in SF with 30,000 employees that pumps $7b into the local economy) to help them build out truth, justice and reconciliation work, empowering them to do courageous teshuva work that rights systemic inequities and injustices.

I don’t know of other rabbis who are working in a similar situation. That being said, I know there’s great interest from inside and outside the Jewish world in the role that I have carved out as a member of the Glide team. Regularly, I hear from rabbis, funders and community leaders interested in learning from this Glide model and in replicating the burgeoning justice-covenant between Glide and The Kitchen and the broader Jewish world.

Three years ago, the entire staff of a large Jewish foundation came to Glide for a 6-hour Tenderloin justice pilgrimage. They took a walking tour of the neighborhood with a 75-year-old former crack dealer; they waited in Glide’s food-line that snakes down Ellis Street and shared meals with clients; and they learned sacred stories of life-transformation from a myriad of Glide staff and clients. While they were serving lunch in Glide’s basement dining room, I was on a work call in my office up on the fifth floor. Hearing a ruckus outside my door, I peered out to find a harrowing scene: our harm reduction team was working feverishly to save the life of a young woman who had just overdosed in the hallway. After administering several doses of Narcan (a miraculous opioid-reverser), this woman, who had literally turned blue minutes before, came back to life in front of our eyes.

Twenty minutes later, I sat in a circle on the pulpit in Glide’s sanctuary with the staff from the Jewish foundation along with the two harm reduction staff members who had just saved this woman’s life. As they shared this unbelievably powerful story with the foundation folks, that room pulsed with holiness. A young woman, a daughter, a human being, an Image of God, had nearly died outside my office. And these Glide staff literally brought her back from the dead.

The second prayer in the Amidah, ‘Gevurot/strengths,’ encourages us to ponder what sacred strength might look like in our lives. In it we sing ‘…Your love sustains the living; Your great mercies give life to the dead; You support the fallen; You heal the sick; You release the captive; You keep faith with those who sleep in the dust…’ I first learned this prayer before my bar mitzvah. I also sang it regularly at my summer camp in Malibu. Back then, we never unpacked the meaning of the words or pondered how god’s holy strength might show up in our world.

Five years into my job, I now know that Glide is Gevurot incarnate. Glide embodies and actualizes the most tangibly righteous values I know. The Gevurot, and really all of Torah, act as an invitation. In what ways might you and I sustain and build redemptive systems that will far outlast us, healing and hopeful systems that will sustain life, give life to the dead, support the fallen, heal the sick, release the captive and accompany and love and lift up those who sleep in the dust?

My time at Glide has softened my heart and tempered my judgment. Beyond me, I see how Glide and Glide’s values (radically inclusive, truth telling, loving and hopeful, for the people, celebration) regularly and reliably bring hope and healing to those living in the other America. How getting proximate to this neighborhood and to the people who live and work here summons those with power to moral responsibility.

You can only imagine what an astounding z’chut (privilege) and blessing it is to be the rabbi at Glide, to build upon and magnify this sacred vision we’ve inherited and to fold increasing circles of justice-oriented souls into this life-saving and life-affirming work.

Michael Lezak is the rabbi at Glide in San Francisco, a radically inclusive, just and loving community mobilized to alleviate suffering and break the cycles of poverty and marginalization, where he staffs the Center for Social Justice. Rabbi Lezak is on the national board of T’ruah: The Rabbinic Call for Human Rights. He is married to Rabbi Noa Kushner and is the proud father of three daughters.