We need more Reform rabbis. The only answer is recruitment

In my experience, rabbis do what my older colleague did for me, fifty years ago. They quietly encourage their talented students to become rabbis. In every congregation that I have served, I would take kids aside and say to them, as that long ago rabbi said to me: “You can do this. Think about becoming a rabbi.” Some even took me up on it.

A few years ago, in the midst of a household move, I lost something very precious: my ordination diploma. I felt many twinges of sadness – remembering the many teachers who had signed it, back in May 1981. Many of them are now teaching in the Supernal Academy. While their signatures on my life are indelible, their physical signatures in ink are gone.

That ordination certificate, wherever it is now, is a parchment reminder of my ordination. It does not substitute for the memory of the day that I became a rabbi. 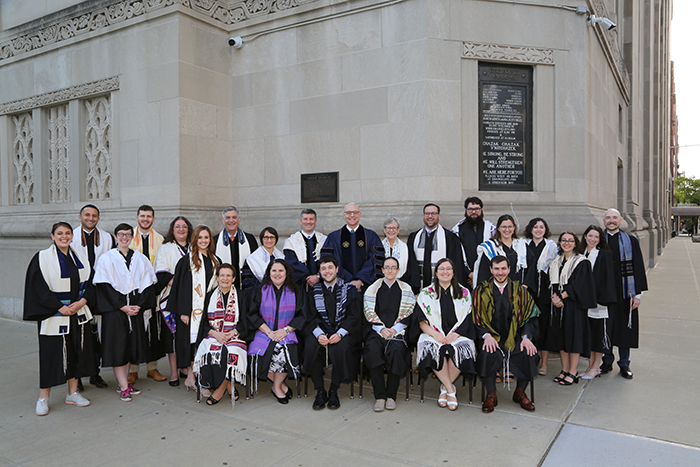 I do not need a parchment reminder of the day that I first considered becoming a rabbi.

It was precisely at this season in 1971. I was attending a Passover spring break program for teen religious school assistant teachers, held at the Reform movement’s Camp Eisner in Great Barrington, Mass.

A then-young rabbinical student gave a series of talks on Jewish thought. It was as if Mount Sinai had dropped into my lap. I loved being Jewish. I loved the Jewish people. But, suddenly, I experienced a sudden revelation of content and substance that I had never previously encountered.

The rabbinical student and I took some long walks around the camp. By the time those walks were over, he had convinced me (though it took no great effort): “Yes, you can do this, and you should do this. You should become a Reform rabbi.”

I write these words in the wake of one of the saddest weeks in the history of the American Reform movement. Last week, the Board of Governors of Hebrew Union College-Jewish Institute of Religion voted overwhelmingly to “sunset” the rabbinical program at its flagship, historic campus in Cincinnati.

“Flagship” and “historical” are nice, but they were no competition for students’ personal and geographic desires. The raw truth is that in recent years, rabbinical students have increasingly voted with their feet. Upon their return from the mandatory first year in Israel, they preferred to study at the Los Angeles or New York campuses. Over the past fifteen years, enrollment in Cincinnati has fallen by 60%.

But, here is the wake-up call.

Why? In the words of the classic movie “Casablanca”: “Round up the usual suspects.”

Yes, the proliferation of other, “off-brand” seminaries, with more seminaries competing for fewer students.

Yes, the growing secularization of America in general.

Yes, the changing nature of the clergy profession itself.

All those are true, but they are not true enough.

In my experience, rabbis do what my older colleague did for me, 50 years ago. They quietly encourage their talented students to become rabbis. In every congregation that I have served, I would take kids aside and say to them, as that long ago rabbi said to me: “You can do this. Think about becoming a rabbi.” Some even took me up on it.

This has been good, but it has not been good enough.

The Reform movement needs a coherent, all-encompassing, intentional strategy for recruiting the next generation of rabbis.

Once upon a time, the Reform movement had “pilgrimages” (note the word) to the HUC-JIR campus in Cincinnati. The purpose: bring Reform youth to the “mother ship,” and influence them to choose the rabbinate as a profession. This happened when they were in high school; in many cases, even before they had settled upon an undergraduate college. The endeavor worked; many of my colleagues first felt the stirrings of rabbinical desire through that experience.

Sadly, that is no longer an option.

We needed, and we still need, an alternative strategy.

Now that it is spring, thoughts turn to summer – which is to say, summer camp.

The Reform summer camp system is the jewel in the crown of the Reform movement. Rabbis always come to Reform summer camps for extended periods. These are not vacations. They come to teach; they interact informally with kids and staff. It’s all good.

It is a Reform summer camp. It is Shabbat morning.

A rabbi stands before the campers, counselors and general staff.

She says these words very clearly, and very intentionally:

“Shabbat shalom. Don’t you hate it when people ask you, ‘So, what do you want to do when you grow up?’ I don’t blame you. But, let me throw an idea at you.

“Right about now, there are about twenty of you out there – kids and staff alike – who would make very good rabbis (or cantors, or Jewish educators). The Jewish people need you. We need your minds, your souls, and your energy.

“You see that tree over there? At 5 pm today, I will be sitting there. I invite anyone who is even remotely thinking about a career in Judaism to come hang out with me.”

The Jewish professional world is facing a crisis of talent and energy. The “great quit” or the “great resignation” that is affecting other professions has hit Jewish professions especially hard. COVID did not help; if anything, it only highlighted and exacerbated the frustrations and the eleventh plague – of burnout.

The Hebrew Bible is filled, famously, with “begats.” The Scriptures are obsessed with naming parents and children.

By the time we get to the period of the ancient sages, centuries after the Bible, there is a different obsession.

It is not: “Who begat whom? Where do you stand in the line of the generations?”

It is: “Who taught whom? Where do you stand in the line of tradition?”

Those are worthy questions. Let us invite the next generation to offer its own answers.

Rabbi Jeffrey K. Salkin is the rabbi of Temple Israel in West Palm Beach, Florida. He is the author and editor of ten books. His blog, “Martini Judaism: for those who want to be shaken and stirred,” won the 2022 Wilbur Award for “its excellence in communicating religious or inspiring themes.”