The Vilna Shul is itself a hybrid, a temple to culture that offers synagogue services 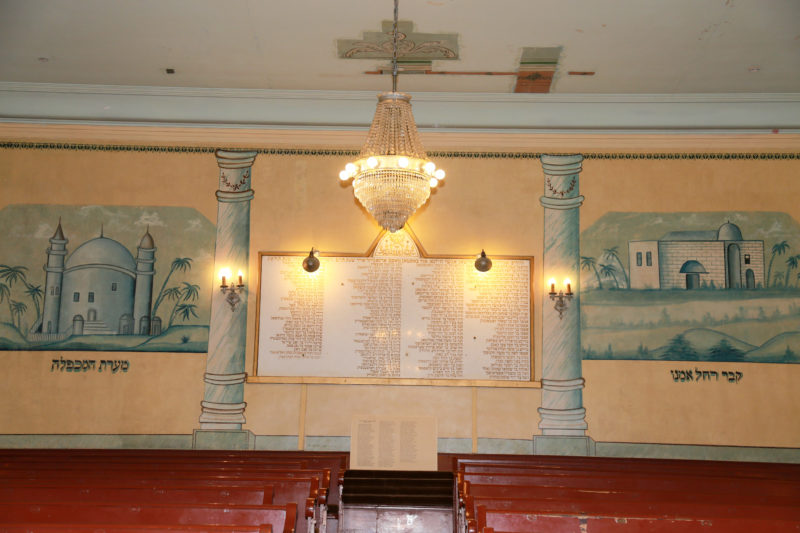 Boston’s Vilna Shul is more than a century old, welcoming generations of the city’s Jewish community before falling into disrepair in the 1980s. But now, it’s being given an unlikely second life — as a start-up serving not just as a gathering place for Jewish Bostonians, but as a nonprofit cultural center open to the broader Boston community.

Located in historic Beacon Hill, the Vilna Shul — named for the founders’ storied native city in Lithuania — was built in 1919 at a time when the neighborhood was home to 40 synagogues. By the 1980s, most of the city’s Jewish population had moved to the suburbs, and the building — the last immigrant-era synagogue still standing downtown — was abandoned. Richard Mintz, a Boston lawyer who died in 2011, led the effort to save it from the same fate as the other old shuls by purchasing it in the mid-1990s, rather than let the city raze it for parking. Mintz and his allies turned it into a nonprofit cultural center, which launched a period of experimental programming and gradual renovation on a budget that was sometimes as low as $100,000 a year, Dalit Ballen Horn, its new executive director, said.

The process, she said, upended traditional practice. Normally, an organization — like the original Vilna Shul — is created to serve particular people, for a certain purpose. This iteration was born out of the desire to preserve a piece of history in a particular place. In 2015, the community that had grown up around the Vilna Shul, and its board realized that the Jewish population in the immediate area had itself grown.

“There were so many people who were searching for community, and wanted to be connected to Jewish life, who were not going to do it at a Hillel or a synagogue or a JCC. This was downtown,” she said. “The JCC here is thriving, but it’s in the suburbs.”

A $4.5 million capital campaign restored the building just in time for it to celebrate its centennial about two months before the pandemic hit. Now, the Vilna Shul is ready to start up — again. Horn started in February, after serving as vice president of strategic partnerships and impact at the Shalom Hartman Institute of North America. This fiscal year, the Boston federation — the Combined Jewish Philanthropies (CJP) — has provided $110,000 to the Vilna Shul.

“The Vilna Shul has a vision for the future, and strong leadership and staff along with committed volunteers,” said Adam Smith, CJP’s associate vice president for young adult and teen engagement.

Despite its name, the Vilna Shul is no longer functioning as a traditional synagogue. Services, however, have been on its menu of offerings since it first reopened in the 1990s, and still are, Horn said. “Havurah on the Hill,” which consisted of Friday night services, dinner and a lecture, was one of its founding programs, Horn said. The havurah, or prayer circle, also organized High Holiday services; the members were mainly young professionals who were either not married or didn’t have children. That’s still one of the Vilna Shul’s two primary populations, Horn said; the other is empty-nesters who have chosen to spend at least some of their retirement years in the city.

“These people are important and serious Jews,” she said, who are attuned to the Jewish calendar even though many of them are not traditionally observant.

Horn sees a post-pandemic reopening as a possibility for the fall, but also notes that the “Virtual Vilna”— the center’s rich online offerings —  is reaching 10 times the number of people the physical space can accommodate. A thousand people have registered for an upcoming program.

The Vilna Shul’s trajectory evokes that of the Sixth & I Historic Synagogue in Washington, D.C. The original home of Adas Israel Congregation, now named for its address at the corner of Sixth and I streets in the city’s northwest quadrant, it’s another immigrant-era synagogue that was renovated and reopened, in 2004. Instead of razing it for a parking lot, the plan was to turn it into a nightclub; three local real estate developers bought the building  out of a visceral desire to keep it within the Jewish community, said Heather Moran, Sixth & I’s CEO and executive director. One of the developers had attended services there as a child. They were initially focused on cultural offerings for Jews in their 20s and 30s and for the neighborhood more broadly, and when they offered religious services for the first time, they were surprised by the demand.

“They thought they were being optimistic by buying 200 prayer books, and they ran out,” Moran said.

To be sure, the boundaries between synagogue and classroom have long been porous; in the shtetls of Eastern Europe, the synagogue also served as a study hall. The word “shul” means “school” in Yiddish. Suburban synagogues offer adult education — Jewish text study, book clubs, lecture series. IKAR in Los Angeles is a synagogue that also records music; the Eldridge Street Synagogue in lower Manhattan offers tours, and religious celebrations still take place there, as well.

Horn sees these organizations and others, such as the Skirball Cultural Center in Los Angeles and Mishkan Chicago, as existing on a spiritual-cultural continuum.

“This is a growth opportunity within the American-Jewish community in particular areas,” said Rabbi Lisa Grant, who directs the rabbinical program at Hebrew Union College-Jewish Institute of Religion (HUC-JIR) in New York City and has an academic expertise in adult education. “Almost everything can have a spiritual component.”

Another similarity between the Vilna Shul and Sixth & I is the decision to avoid a synagogue-type dues model of membership and instead rely on a combination of fundraising and “earned revenue” generated by ticket sales, for example.

“There’s historically been a lot of boundaries that people have to cross to feel like they’re part of a community,” Moran said. “We did not want to have members and non-members. We did not want a financial boundary people had to cross.”

Beyond the CJP, the Vilna Shul’s supporters are mainly individuals, Horn said; it hasn’t been ready to seek funding from foundations.

The pandemic’s disruption of office life has stirred speculation that cities will lose population, but interest in these urban hybrids persist. Sixth & I receives several calls a month from people interested in its model, Moran said. The UJA-Federation of New York is seeking a founding director for The Neighborhood: An Urban Center for Jewish Life, a new nonprofit in Brooklyn. The job description frames The Neighborhood as “a dynamic, multi-purpose facility that can host numerous, simultaneous Jewish activities from the cultural to the spiritual.”

The federation said it’s too early to discuss the project further. Lani Santo, the founder of Footsteps, a support and service organization for people leaving the Haredi community, was part of a large group of individuals who participated in early brainstorming sessions, which happened about five years ago, she said. The impetus for the talks was the feeling that Brooklyn offered Jewish life that was vibrant and diverse, but also hard for newcomers to find.

“The conversation kept coming around to, ‘We could communicate more, but ultimately we need to find some sort of ‘heart center’ where different groups and individuals can gather, and that’s not necessarily a synagogue because some people don’t want to come to synagogue,” Santo said.