The Making of a Young Fundraiser

It was the summer of headlines. “6 Year Old Boy Raises Thousands for Cancer Charity Run,” “Young Fundraiser,” “Long Island 6 Year Old Raises Money for Cancer Research.” But, the story goes so much deeper than those simple words. It is rooted in a history of kindness, of caring, of friendship and family and loss and love.

It might have begun three years ago at that first race when this boy, my son, saw his father run along with our closest of friends, really not friends at all, more like family. He sat in the stands, watching the participants run on the field of Yankee Stadium. Understanding only a little, as much as a three year old can, that this day, this race, was something that mattered.

It may have been the following year, when he was just one year shy of being able to participate, to raise money just like his father, to “help people who were sick,” as he would put it. Wanting so much to be a part of what he saw.

Or it might have been the day last year when he began raising money as well. The first time he explained to someone what he was doing and why he was doing it. He was trying to help in finding a way to make sick people healthy once again.

But, in actuality, I believe the story began so many years before that. 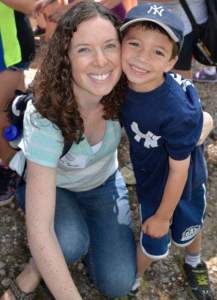 When I was a young girl, I stood at a birthday party confused as to why another little girl had no hair on her head, just a scarf. While our closest of friends, really more like family, witnessed her best friend dying. A moment, or really moments in time that would shape the person she would become and would change her family forever. The loss of a little girl, Jill, who lived for only 11 years, but inspired so many. Who wrote a poem before her words were silenced. A poem about a bluebird. “He sings the story of life,” she wrote. Wisdom beyond her years. Words that we hear as the team, “Bluebirds In Pinstripes,” runs each year.

My son runs because they have never forgotten.

Because years later, this little girl’s best friend decided she wanted not just to remember, but act; to hold onto the memory of who Jill was and to work to shape the future of cancer research so another 11 year old girl would not have to watch her best friend dying.

Because Jill’s best friend’s sister, holding Jill’s memory close, did not just race on her own. Instead, she came to my son, speaking with him about what it meant to take on this holy act of running and raising money and remembering. And instead of encouraging her friends and family to give to her, she supported his fundraising efforts, so that little boy would understand the joy of making a difference.

He runs because they live their lives with her memory in their hearts, her voice in their heads, inspiring them to act in the world.

And the story continues from there. Because his actions in raising money mattered to his family, to his grandparents and cousins and aunts and uncles as they had learned these values and behaviors. Through their words of encouragement, their phone calls and inquiries, they taught a 6 year old the lesson that he may accomplish so much in his life, but the actions he takes for others, deeds of kindness and love, g’milut chasadim v’ahavah, speak in volumes to the person he is and the person he will become. Caring for others, a core piece of what it means to be Jewish, matters in this life. 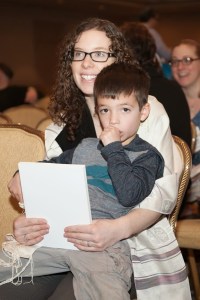 He runs because his family not only understands this value, but loves him enough to help him discover this truth as well.

There are so many key values that can be taught in a classroom, but there are so many that cannot. Our Torah portion this week speaks to the latter. We read in Va’et’chanan “But take utmost care and watch yourselves scrupulously, so that you do not forget the things that you saw with your own eyes and so that they do not fade from your mind as long as you live.” (Deuteronomy 4:9) We are instructed to remember, not just what we have been told, but what we have lived, what we have experienced, what we have seen with our own eyes. What a significant lesson for our students, our children, our community – providing the space and the opportunity to experience life with its joys and challenges and array of emotions.

That little boy has now raised thousands for research that we hope one day will make a difference in the lives of those battling this awful disease. What an accomplishment for a boy so young. But, even so, the truth of his successful fundraising efforts is so evident.