Words in the heart

My time on campus expanded my horizons beyond my wildest dreams. As university admissions material so truly states, it was “an education unlike any other.”

On Monday of last week, I battled Maryland pre-rush hour traffic and parking spaces turning into evening through lanes to return to campus. As an undergraduate student two decades ago, I could not imagine introducing my 18 month old daughter to GWU in this context. Just a few hours prior, we learned about both a unique and unfortunate opportunity where GWU students rallied after a Torah scroll was desecrated at a fraternity over the weekend.. It would be a chance to both celebrate our faith and take a public stand against antisemitism.

My time on campus expanded my horizons beyond my wildest dreams. As university admissions material so truly states, it was “an education unlike any other.” Unfortunately, what I learned in and out of the classroom could not prepare me for the rush of emotions I experienced that Monday afternoon. 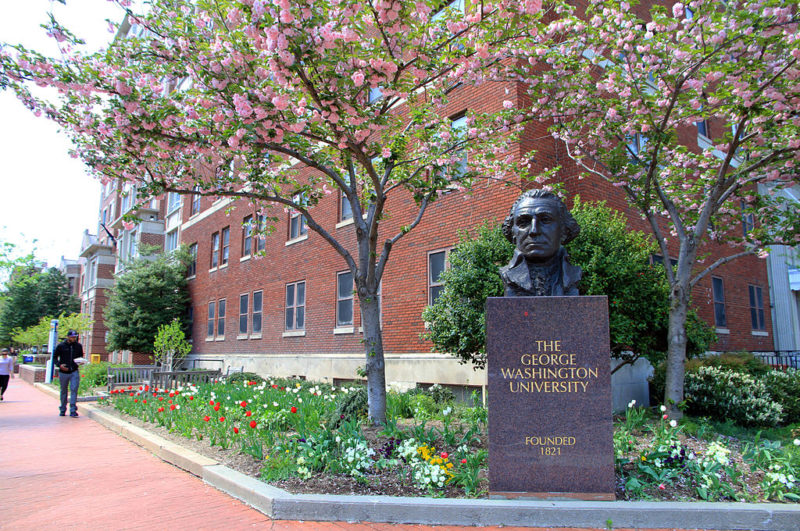 Never once as an undergraduate did I experience antisemitism.

Rather, as I was pushing a stroller down G Street, I was reminded of my many non-Jewish classmates who took a keen interest in Judaism and in the diverse free market pluralistic democracy that was and continues to be Israel.

My peers and I graduated with not only an appreciation for different cultures and faiths, but a genuine and patriotic desire to learn more about the diversity of our country. GW was not only the first time I made friendships with Hawaiians and Montanans, but also with Muslim Americans. This is exactly why I applied early decision to GW and I was not let down.

As I passed the American studies department, I was reminded of more than one professor there. In the months after September 11th, 2001 there were many references to the wisdom of President George Washington with fruitful discussions on interpretations of e pluribus unum (out of many one).

A sign in the window of School Without Walls caught my eye – Silence is Acceptance. Not knowing what lay around the corner for my daughter and me, I quietly prayed that the hastily organized event would have meaningful attendance and the diverse student body I fondly remember would not be silent.

Having recently spent time in Pittsburgh to commemorate the deadliest act of antisemitic violence in American history, I prayed harder that the event would remain peaceful.

Much to the delight of my “COVID-baby” who is used to the quiet monotony of the suburbs, several hundred diverse participants were clapping, marching and ultimately singing. This was the largest crowd Eliora Galit had seen in her life. For the next hour she was grinning ear to ear trying to make eye contact with so many diverse faces.

Naturally, as a toddler she has a blissful ignorance and did not know why we were assembled. As her father, I did not. On the ride home, I wondered what the college experience will be like for her – with a distinctly Hebrew name – 18 years from now.

The ancient Jewish Talmud teaches that “words in the heart (words left unsaid) are irrelevant words.” As my daughter learns to talk, this is an important value I intend to instill. When we see injustice, it might be easier to look the other way and keep our thoughts to ourselves. As Dr. Martin Luther King Jr.eloquently made clear this cannot be an option. “Injustice anywhere is a threat to justice everywhere.”

I learned in history classes at GW, past is often a prologue.

Just last month, Jewish students publicly voiced concern in the pages of the school newspaper. This semester and in recent academic years hateful incidents have occurred at schools larger and smaller than GW from coast to coast.

Antisemitism is the oldest hatred. It is an injustice and it deserves the full attention of the entire university community.

President George Washington had a vision I believe the entire university community should examine.

In August 1790, before anyone could dream of flights from DCA or the Acela corridor, President Washington traveled overland to Newport, Rhode Island. His sole reason for making the trip was to publicly acknowledge the role of the Jewish community during the Revolution and his hopes for the nation’s collective future.

As the campus community and broader Washington Jewish community reflect on how to learn and grow from the heinous desecration at TKE fraternity, perhaps the wisdom of the university’s namesake could enter into the academic discussion. President Washington envisioned a new country which “gives to bigotry no sanction, to persecution no assistance” and that “everyone shall sit in safety”.

Ari Mittleman is a 2004 graduate of GWU. He is author of the forthcoming book Paths of the Righteous: Stories of Heroism, Humanity and Hope.