Shavuot made me a Zionist. Here’s why.

While our tradition links Shavuot to the giving of the Torah, that appears to be a later addition. In the Bible, it’s as if the holiday just celebrates the bounty of the land and our attachment to it. The texts we read on Shavuot, especially The Book of Ruth, are an ode to the Land of Israel and they mesh together love of the people with love of the land.

Shavuot made me a Zionist.

Well, maybe it wasn’t just Shavuot, but that holiday played an important role. Why? Because when you grow up in the Southern Hemisphere, the Jewish holidays make you keenly aware of being in the wrong place; especially those that, like Shavuot, have a strong seasonal component. 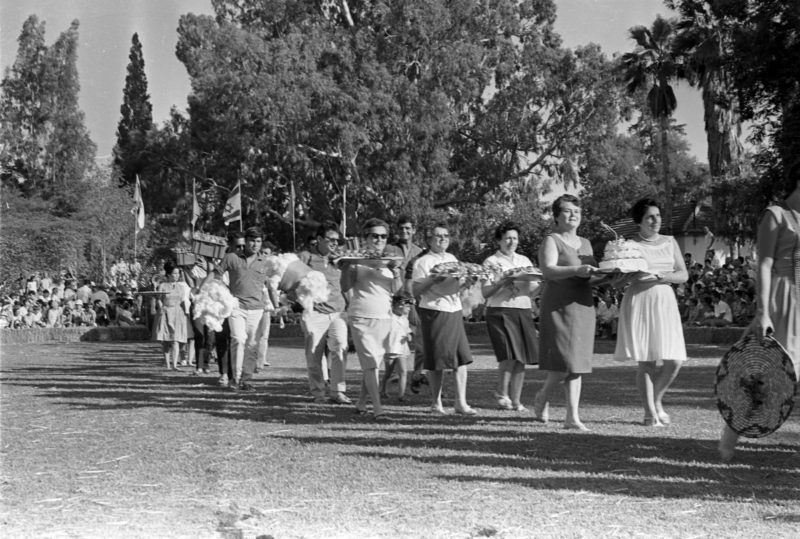 In my Jewish school, we carried baskets with bikkurim, the first ripe fruits, in the dead of winter and sang joyful songs of harvest when the wheat was months away from maturity. We marched in the schoolyard wearing the kova tembel (the slightly ridiculous Israeli pioneers’ hat) and sang “make way, we bring the first fruits from the confines of The Land!” For better or worse, it instilled in us the idea that there’s something irretrievably lost in your Judaism if you are far from the Land of Israel. It was as though our kindergarten teachers wanted to show us how ridiculous a Jew is outside of his homeland.

To be sure, most Jewish holidays have a connection to the Land of Israel and its cycles of nature. It wasn’t less disorienting to celebrate Passover as the holiday of spring amid falling leaves and autumn storms, but there was something unique about Shavuot that made evident the incompleteness of a landless Judaism.

While our tradition links Shavuot to the giving of the Torah, that appears to be a later addition. In the Bible, it’s as if the holiday just celebrates the bounty of the land and our attachment to it. The texts we read on Shavuot, especially The Book of Ruth, are an ode to the Land of Israel and they mesh together love of the people with love of the land.

This seems very relevant today amid unrelenting attempts to decouple Judaism from its relationship to Israel and deny that Jews are indigenous to the land. To be sure, Judaism survived in exile, because it’s adaptable and flexible, but one of the secrets to that survival was maintaining a relationship with the land. For two millennia of exile, Jews not only cried “Next Year in Jerusalem,” but learned Jewish laws that apply only to the Land of Israel; they memorized agricultural laws although they were forbidden from cultivating the land and became experts in the fruits and species that existed only in Israel. In other words, the nostalgia for the land and the hope of returning to the cradle of our nation were part of what sustained us. Jews understood that People, Land and Torah together form a triangle, “a triple-braided cord that can’t be severed.” (Ecclesiastes 4:12). Ultimately, all attempts to create a Judaism devoid of its relationship, even if platonic, to the Land of Israel, have faded into irrelevance.

Our relationship to the land is not idolatrous. The land is not a god and it’s not holy in and of itself. In fact, the concept of Eretz Israel (the Land of Israel) is fluid; the sages of the Talmud shifted the borders of “Eretz Israel” based on different considerations, for example, continuous Jewish habitation, which, incidentally, provides a halachic rationale for a territorial compromise with the Palestinians. So, the land of Israel is not a deity that one must serve and appease. Rather, it’s the platform upon which a full Jewish society must be built, the canvas upon which the Jews have to deploy the art of being a people.

That’s why, on Shavuot, when The Book of Ruth celebrates our love of the land, it does so by telling a story of solidarity and charity. The story is set against the backdrop of the pe’ah laws, which instruct farmers to leave the corners of the fields unharvested so that the poor can take grain for their families. Ruth is one of those poor people that survive by collecting pe’ah, and that’s how she meets Boaz, the farmer who owns the land. Eventually, she becomes his wife, begetting the lineage of King David. Incidentally, the story shows how, in ancient Israel, every family was entitled to a plot of land to cultivate so that poverty and destitution would be rare.

In other words, there’s no love of the land without love of one another; there’s no sense in possessing the land if we don’t use it to enact norms of solidarity, justice and generosity.

Judaism gave the world unique values of humanity, justice, compassion and fraternity, but what’s the point of those values if they aren’t the bedrock of a sovereign society? What’s the use of values without a land in which to enact them? What’s the meaning of lofty principles if they are limited to the book and the house of study? Owning land, having a territory that we can call home, distinguishes values that are purely abstract from values that serve as the foundation of a society that operates in the real world.

Naturally, when values are applied “in real life,” they become messy; they collide and have to be weighed against each other. A people that only dreams of independence has the luxury of imagining a pure society with no painful compromises. That’s why nowadays, some Jews continue to prefer exile to sovereignty. Without the challenges of building a country in the real world, they can avoid the need to navigate conflicting principles and make unpalatable choices in imperfect circumstances. In a sort of historical Stockholm Syndrome, these Jews have taken tragedy — the historic landlessness of the Jews — and made it into a virtue. It’s, in a way, cowardly because any value’s ultimate challenge is in its clash with reality. Jewish tradition always prefers the complexity of the real to the pristineness of the ideal.

That’s why Shavuot was so important in ancient times and why today Judaism would be empty without its relationship to Israel. Not only because a key component of our identity would be missing, but because only in a land of our own can we build a society that is truly ours, a society that strives to be guided by our values and historical experience. A people needs a land, the same way a painter needs a canvas; only on a land can the character of the people be revealed and expressed.

That task wasn’t easy in the times of Ruth and Boaz, and it isn’t easy today, but how blessed we are to be able to try. My kindergarten teachers succeeded. I know now that Boaz, Ruth and I have the same task and the same challenge: realizing the eternal hope of being a free people in our land.