Poems that exceed the limits of language: A review of: Poems Born in Bergen-Belsen

The Holocaust, it has been said, exceeds the limits of language. Capturing the horror, the trauma, the indelible scars and guilt can often be accomplished solely by poetry. This is what Menachem Z. Rosensaft masterfully does in his stirring new collection, Poems Born in Bergen-Belsen (Kelsay Books, April 2021).

Born in the Bergen-Belsen Displaced Persons camp in 1948, Rosensaft was raised by survivor parents, both of whom had lost their entire families in the Holocaust. This instilled in him a deep sense of loss and commitment to memory that has guided him throughout his life. As associate executive vice president and general counsel to the World Jewish Congress, teacher at Columbia and Cornell Law Schools, and a member for many years of the U.S. Holocaust Memorial Council, he has been at the forefront of efforts to fight racism, anti-Semitism, and genocide. But now, drawing on his emotional reservoir, he has produced a compelling collection of verse.

The breadth of these poems is extraordinary, extending from the pithy “The Difference” (the difference/ between John Smith/ and/Hans Schmidt/is that I never wonder/whether John’s father/ killed my brother) to the heartbreaking “Tishah b’Av, 1943” (perhaps a sudden/unresisting/silence/or merely God/exiled/into phantasmal/cosmic solitude/on this endless ninth day/of Her final Av).

Throughout, readers of Rosensaft’s poems will enter a world of unspeakable suffering and sorrow but also of defiance and faith. Thus, he writes in memory of his mother, blessed is the soul/that emerged/from Auschwitz and Bergen-Belsen/to create hope/not tears/to teach life/not sorrow.

“Poems Born in Bergen-Belsen” will serve as an important resource for students of the Holocaust, for educators, and spiritual leaders. But it is also a work of literature that deserves to be judged on its artistic merits, which are formidable. Rosensaft has not only performed an invaluable service but also touched our souls.

Michael Oren is a former Israeli ambassador to the United States, member of Knesset, and deputy minister in the Prime Minister’s Office. He is the author most recently of The Night Archer and Other Stories (Wicked Son, 2020). 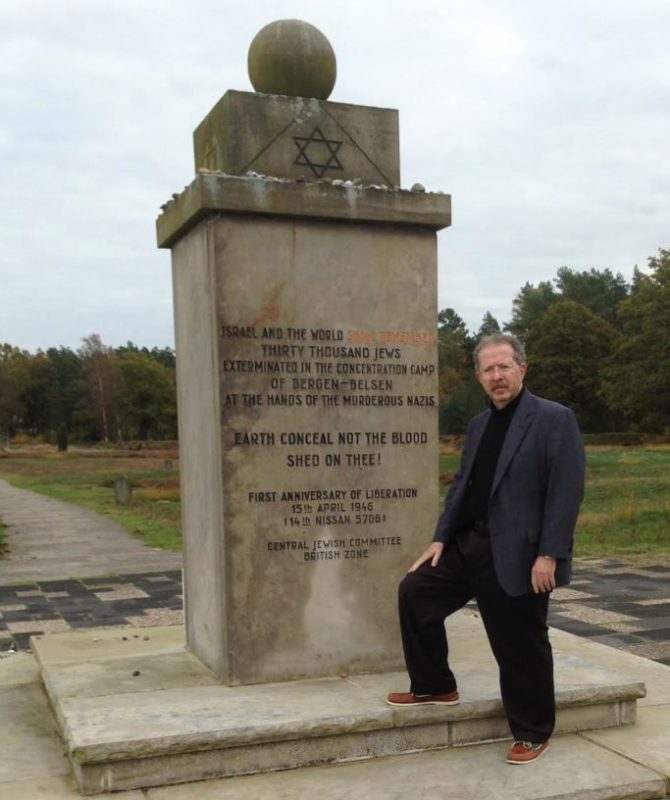 Menachem Rosensaft at the Jewish Monument at Bergen-Belsen; courtesy